But for Tesla, the company decides to diversify its funds and increased its cash returns. However, Tesla also warned investors about the volatility of Bitcoin’s price in its SEC filing. According to the SEC filing, Tesla ended last year with $19.38 billion in cash and cash equivalents.

After having an impact on DogeCoin, Musk seems to have a positive impact on the price of Bitcoin, following the massive Bitcoin purchases his company made. Bitcoin rose to $44,200 after hovering around $36,000 days ago.

On the same note, Tesla’s shares increased by 2% on Monday morning, the same period Bitcoin crossed its all-time high.

This is not the first time Musk is tweeting about market movements, but it’s the first time he’s gone for the crypto industry. In 2018, the SEC filed a case against Musk for tweeting that he wants to take Tesla private at $420 per share. He had to settle with SEC and subsequently paid a total of $40 million ($20 for himself and $20 for the company).

His impact in the market is now even greater than what it used to be in 2018. That’s because Musk wasn’t the world’s richest man back then, but now he is. His Tesla electric car is valued at a whopping $882 billion, making it the most valuable car manufacturer in the world, ahead of top brands like Volkswagen at $110 billion and Toyota at $212 billion.

With Tesla set to start receiving payments in Bitcoin, its $1.5 billion Bitcoin reserve will provide liquidity for its future dealings on crypto transactions.

Two weeks ago, Musk added Bitcoin hashtag to his Twitter bio, which also spurred the market at the time. 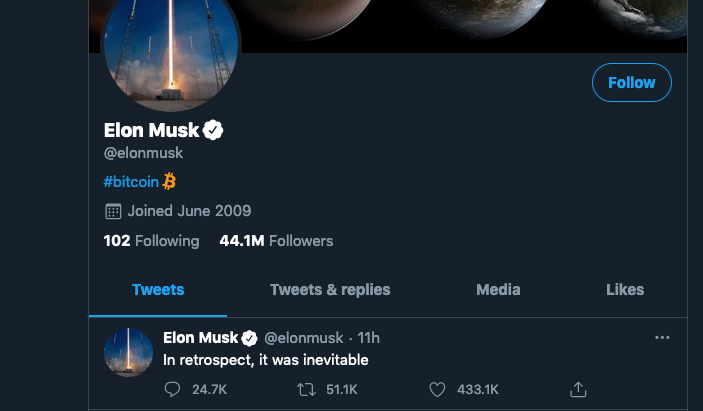 The move pushed Bitcoin’s price higher by 20%. Two days later, he was at it again. This time, stated on Clubhouse, a social media chat site, that he is a supporter of Bitcoin.

“I do at this point think bitcoin is a good thing, and I am a supporter of bitcoin,” he stated.

Related Topics:BitcoinBTCcryptoDogecoinElon Musk
Up Next