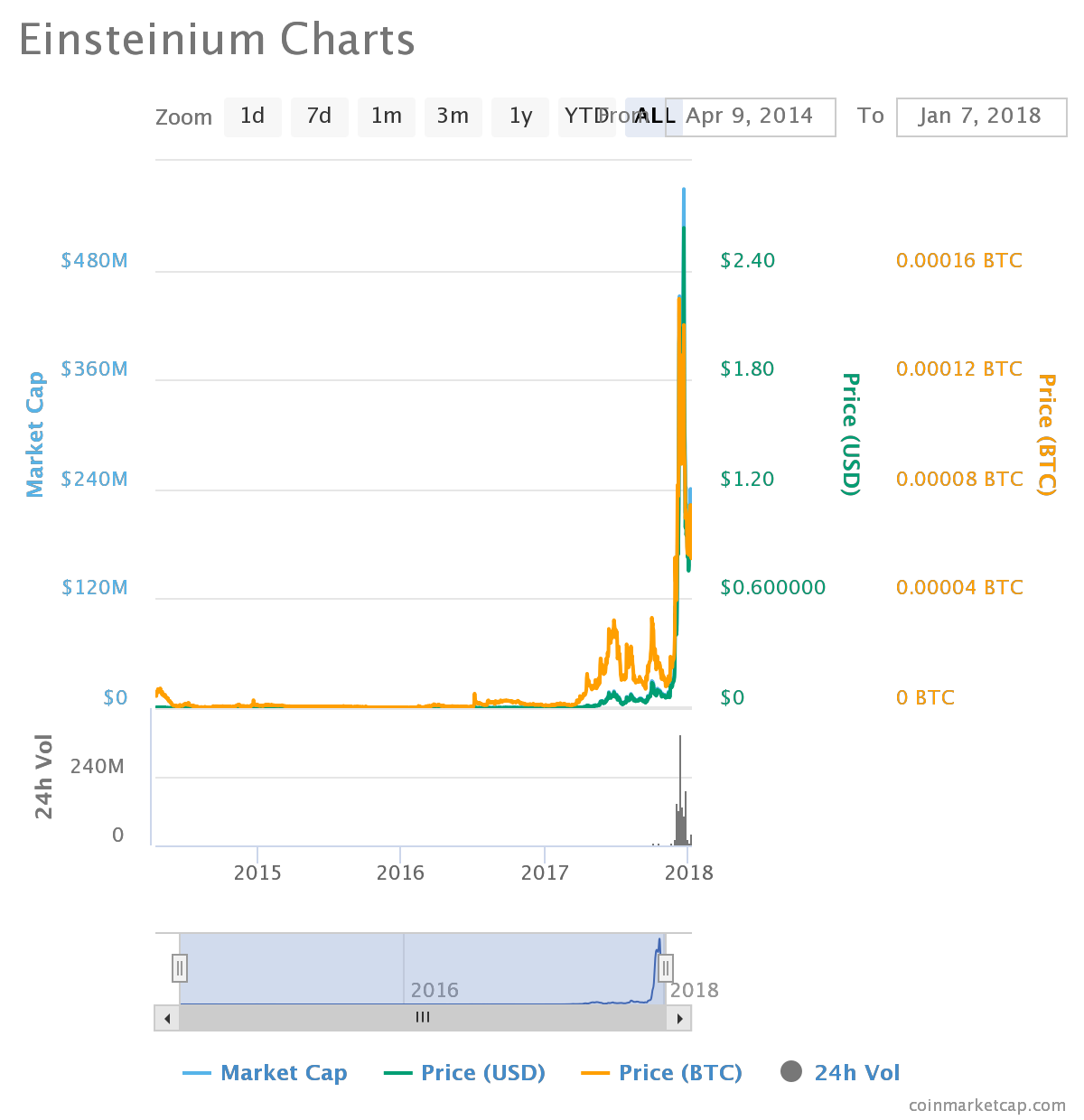 It’s hard to miss a coin boldly named Einsteinium, but is interest in this currency worth the trouble and is Einsteinium potentially good investment? Those are the most significant questions imposing in front of this digital coin cleverly known as EMC2. It is sometimes difficult to determine which digital coin is worthy of attention and which coin is just a “one-hit wonder” doomed to disappear from the map of successful and famous digital currencies that are currently available on the market. To help you follow up with Einsteinium and the way things are with this cryptocurrency, we are analyzing this digital token starting from the basics.

To determine whether this digital coin represents a good investment or not, we first need to go through its purpose and find out more about this cryptocurrency. Einsteinium’s original intent as you can probably guess is closely related to science. This digital coin is launched and named Einsteinium with the purpose of having philanthropic, scientific and technological projects funded quickly and in a straightforward manner.

As you might guess, Einsteinium, as well as other digital currencies, is based and designed on blockchain technology with the idea of making collecting funds easier and much simpler, focusing on scientific and technological development. Just like some digital coins are created for funding art and artists or are prepared to promote original content and collect funds and organize crowdfunding for different purposes.

Einsteinium is based in Canada, Montreal where it was launched back in 2014, but Einsteinium didn’t get to see much action till after three years later in 2017 when this digital coin began to experience an increase in value and price.

With being launched three years ago, EMC2 also became the first research-based ecosystem in the community of crypto values and systems, making it one of the coins with hidden potential for investments and direct operations and utilization that can be done with digital currencies. The existence of Einsteinium consequently conditioned the development of Einsteinium foundation, having this platform focused on charitable and crowdfunding donations that are meant for funding different technological and scientific researching.

To make sure that Einsteinium would acquire potential of funding as many types of research as possible, the creators of this digital coin and supporting platform have even arranged that 2.5% of every mined and awarded blockchain is being donated for purposes of funding different researching ventures in areas of philanthropy, science, and technology.

Through different crowdfunding actions being organized through this platform, Einsteinium is making collecting funds a lot easier than it would be with popular crowdfunding platforms because all funds being raised for scientific purposes are not mediated by third parties, so there are only two parties involved which are characteristic for blockchain operating platforms. That way, raising funds and transferring funds for researching purposes becomes ever so comfortable and amazingly simple.

Einsteinium also promotes education and is working on spreading knowledge and educating interested people about blockchain technology and latest scientific and technological improvements, valuing learning as much as monetary value.

Along with promoting education, Einsteinium also represents an open source ecosystem that fosters code functionality and open source operations as vital to having a functional blockchain environment.

But, how Einsteinium community decides which projects are being funded first or funded at all? To understand the system of evaluation, we will need to define the term “Epoch.”

What is Epoch and how it relates to EMC2?

Whenever a blockchain is being mined with successful result of solving an equation and completing an entire chain, miners are being rewarded, and 2.5% of that reward goes for charity and funding scientific or technological researches. But how is it decided which project is being funded first?

Epoch represents 25 days, which is the timeline needed for miners to be able to complete 36.000 blocks. After completion of the epoch, the funds raised from the awards earned by having miners working on building blockchains is transferred to Einsteinium Foundation. The next step would be to include the members who are actively working on this platform, whether is it just holding the coins or getting involved in mining, to vote for the project they think is the most important.

The members would be asked to vote to have all projects presented in details so they could easily decide which project has the most potential and which project deserves the funds the most. After the votes are collected and counted, the chosen project with the most votes gets the funds. This process is being repeated after every 36.000 blocks are built by miners, that way creating a never-ending circle of funding projects that are potentially important for scientific and technological development.

Is it Worth It?

Einsteinium Foundation along with its crypto coin EMC2 is the biggest and at the same time, the first blockchain based open source community that is involved in collecting funds for scientific and technological projects that are focused on improving and developing science and technology as we know it. The coin is very functional and mineable as well, and if you add the fact that you are helping different potentially essential science projects, owning EMC2 and working on their platforms sounds pretty promising. Given the fact that EMC2 is currently valued at 0.9$ per one coin with a slight decrease in price over the first couple of days of 2018, regardless the decrease EMC2 probably represents one of the potentially profitable investments with a current market cap of 194.6 million dollars.

We will be updating our subscribers as soon as we know more. For the latest on EMC2, sign up below!

Qtum (QTUM): What Is Qtum And How Come It Is Growing So Fast?