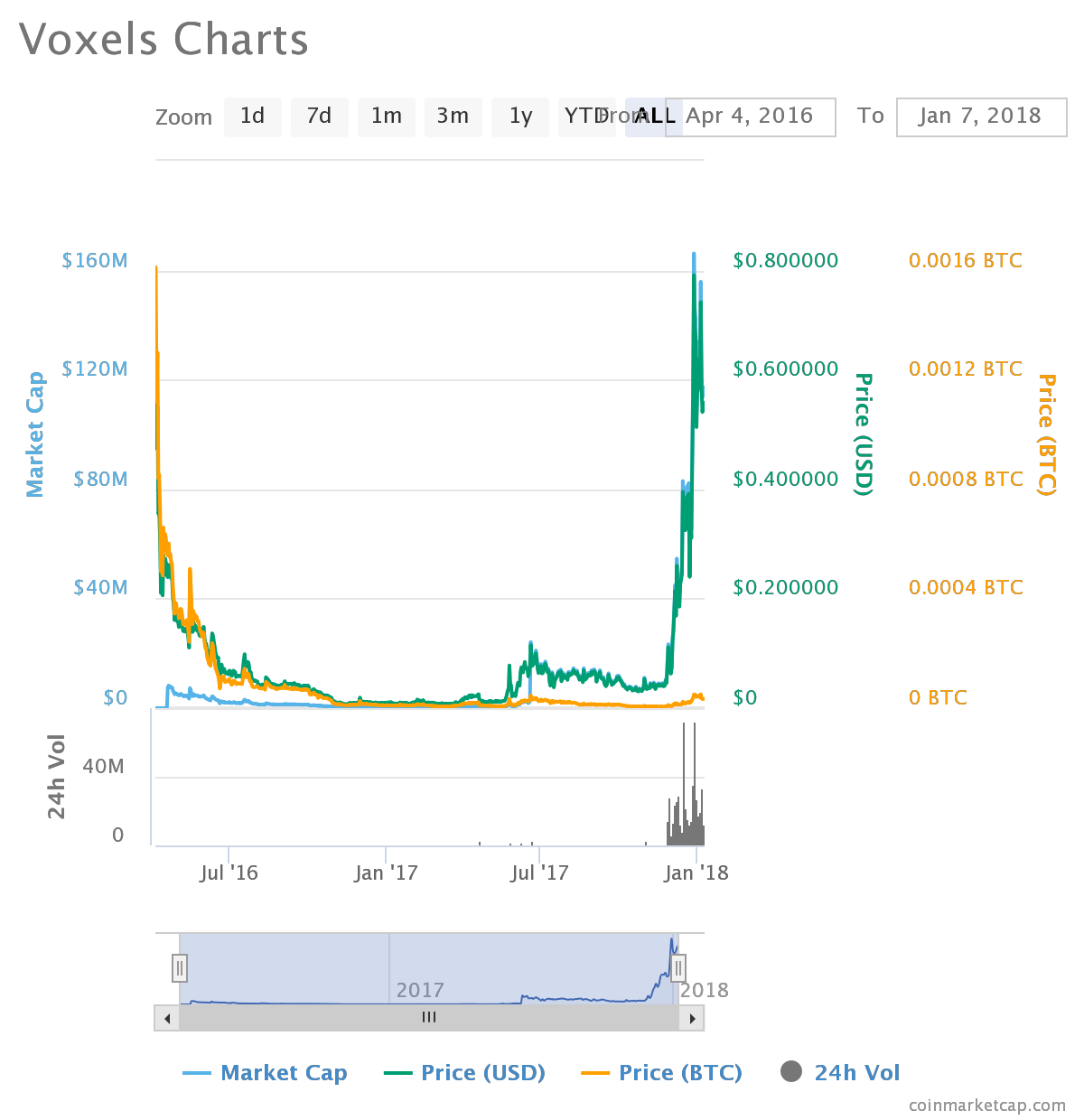 Even if VOX didn’t exist it would be only a matter of time when this type of cryptocurrency would appear. Virtual reality is grabbing as much attention as digital currencies are receiving, although digital coins are drawing more interest these days, especially with predicted value increases and crypto investment craze. Voxels is the first and most popular cryptocurrency currently dealing with virtual reality and VR, which makes it one of a kind in the world of crypto values. But, does it make it one of a kind when it comes to investing and where does Voxels stand on the list of most wanted and most promising currencies? Let’s find out what Voxels is and how it can compete with the big coins.

The Voxelus is a blockchain based platform that merges VR and cryptocurrency technology. The platform is made to enable all users to get easy access to VR and 3D games and applications. The best thing about this platform is that it brings a sort of revolution not to sound too dramatic because this platform allows users to create and use different VR applications and 3D games without even knowing how to code or program. All content available on the platform can be modified, shared, distributed, purchased, resold and played without a single line of code included from the party that is using the content, making access to VR apps and 3D games easier and simpler than ever. The platform also has features that include real-time applications that allow users to play content that is currently being used by the latest VR technology, like Samsung VR or Oculus Rift.

You can easily purchase any available game or application then use that game or app anytime you want as it immediately becomes available at all times after the purchase. To make purchasing and trading easier, the Voxels platform had to come up with a digital coin that would support the idea of having a decentralized community where VR and 3D game enthusiasts can enjoy different apps and games, creators of Voxelus have come up with a digital currency known as Voxels or VOX.

The Voxelus platform has a marketplace, called Voxelus Marketplace that allows users to surf and explore through the library that contains different games and apps posted for purchase by designers and d creators, having a variety of games and apps all in one place. With owning VOX and having access to the Voxelus Marketplace, you can easily purchase, store, share and play any game you like. Besides from games and apps, you can also purchase over 7000 different 3D models, images and graphics. Although purchases can only be made with Voxels, which is the only monetary value currently being used on the platform. Whenever you purchase something, regardless of what you have purchased, the bought item will be immediately available in the Voxelus Creator which is a part of your account that features anything you have on the Voxels platform, so you can easily access all of your purchases at any time.

The Voxelus platform is growing every day as new content, models, characters ready for multiplayer, games and apps are being uploaded every day, making 3D and VR content widely accessible. Especially from the time the Voxelus platform has partnered with Flatpyramid, which is an online network or rather marketplace involved in discovering and distributing new digital, 3D and VR content.

To make Voxels into a functional digital coin that would be enabled for operating across this platform, the Voxelus creators used Litecoin core for their coin, adding improvements in the form of extra security and upgraded verification. In addition to improved security, the coin is made to be functional and easy to use, tested for usage and having all user-friendly features checked before being let out in circulation for exchange. That way the Voxelus platform and 3D content exchange can work impeccably.

Voxels is also available for mining where miners are getting 0.1voxel mining fee utilized with every transaction, which makes this coin more desirable in addition to its original purpose within the platform.

Where is Voxels at Now?

Voxels is currently trading at 0.53$ per one coin with the latest increase of 9.18% which initially brought the price up for this coin. The price is still under one dollar, but this coin is undoubtedly and steadily going up in favor of the Voxelus platform. The thing about the Voxelus and its coin VOX is that this platform is the first blockchain platform to be dealing with distribution and promotion of VR and 3D related products, making the process of purchasing and building virtual reality apps easier than ever. So we can easily assume that this coin along with its patron the Voxelus Platform has a bright future installed for the time to come. As VR is getting huge pluses when it comes to popularity and general interest, we can assume that Voxels will obtain further increases in value as it will become more popular and consequently more interesting for investors in case the price per one coin continues to rise. But, with the current market cap of total 111.3 million dollars and with over 210 million coins in circulation, although slowly making progress, this digital currency along with the Voxelus Platform seems to be doing very well at the beginning of 2018. If this year is to be as fruitful for digital coins as predicted, Voxels is sure to join the team of potentially profitable investments.

We will be updating our subscribers as soon as we know more. For the latest on VOX, sign up below!

Einsteinium (EMC2): What Is Einsteinium And Is It Worth Investing In?