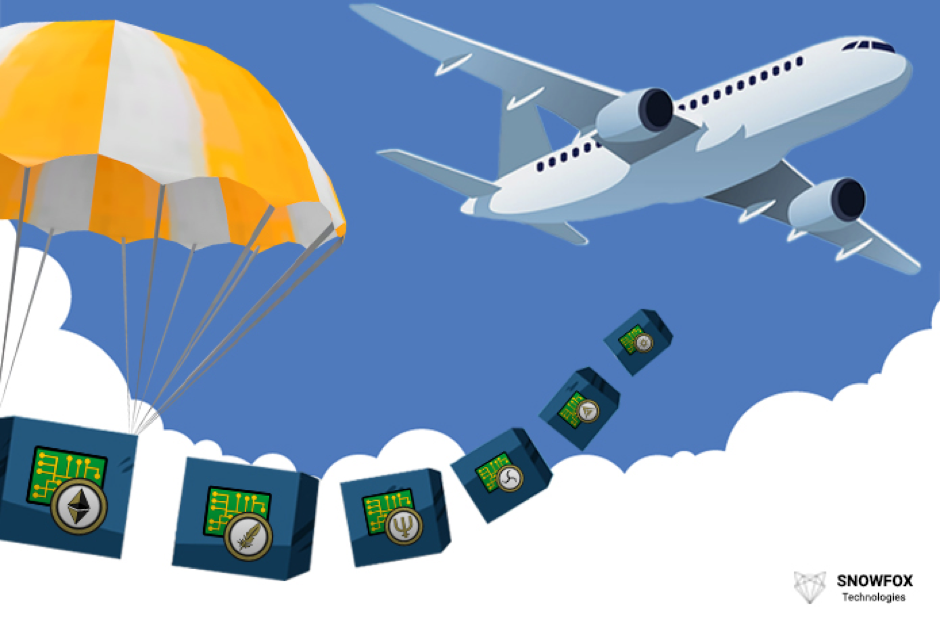 What is an Airdrop?

According to an ambassador of SnowFox Technologies, blockchain enthusiast and international entrepreneur Mike Raitsyn, crypto Airdrop can be defined in the following way:

“crypto airdrop is the way of distributing project tokens (or any other token) among a predefined group of participants. The distribution of tokens during airdrop can be carried out randomly within the blockchain network or on a predetermined basis”.

It is the distribution of free coins. Literally free coins. While it may sound too good to be true, there is a logical explanation why this is done. It is organized by projects mainly to reward users for their loyalty, to create awareness about their token, to create an initial base of token holders, to aid decentralization and even to generate a database of holders which can be utilized for marketing further in the lifecycle of the token.

There are two ways in which tokens are airdropped. One is where they are dropped as a surprise – without the recipient having to do anything – and second is pre-announced where the recipient might be required to complete certain tasks or sign up for the airdrop.

Airdrops usually create a bigger buzz in the community and spread awareness faster than just ICOs because of the inherent advantages, primary among them being no risk but unlimited upside to the recipient.

As projects these days go for a fully funded private sale for convenience as well as regulatory reasons, many projects also choose to avoid the public sale or ICO altogether. Regardless, an airdrop can be used instead of a public ICO or to raise awareness as a complementary exercise.

How does it work?

Airdrops are conducted in various ways. Some of the key differences are:

Airdrops that come as a surprise may be a result of a recipient just holding tokens from a certain blockchain in their wallets or even on an exchange. These tokens might be created as a result of a hard fork, as in the case of Bitcoin Cash and several other forks that were created last year. In such cases, a snapshot is taken at a particular date / time of all the wallets holding Bitcoin and then those wallets were credited with Bitcoin Cash. There is no action from the user’s side. Even exchanges support such airdrops and all a user has to do is hold. Another popular token, EOS has had over 10 airdrops.

Second type, where an airdrop is announced and the user has to take action. This is called a bounty. This could involve signing up on their website, submitting KYC documents, joining their telegram group or following them on Twitter. One such coin, Polymath airdropped 250 tokens for users who signed up on their site and completed KYC requirements. At its peak, these token were valued at $400.

Sometimes there is no hard fork but holders of a particular chain still get new tokens credited just for holding a particular token. For example, OmiseGo airdropped their tokens to Ethereum holders. Some coins do this as a one-time activity and some coins have recently started doing this as a regular activity. This is to encourage users to hold the tokens long term rather than buy it for a one-time event of an airdrop and then sell them back creating an artificial temporary pump in price.

An example of an on-going airdrop is OCN. OCN airdrops OCP, which is projected to be similar to GAS for NEO, every month by taking a snapshot and the average number of OCN tokens held by a wallet per month will be used to calculate the number of OCP tokens airdropped to a recipient wallet. This airdrop is spread across 50 months to ensure only loyal holders of the token get maximum benefit.

Some projects give away a fixed amount of coins per wallet / user / account whereas some peg it to the percentage of the tokens held. For example, ONT airdrop was pegged to the number of NEO tokens held by a wallet where for each NEO you would get 0.2 ONT.

While there is no harm in free money, some airdrops are etched in our memories as some of the biggest ones. While we already discussed Bitcoin Cash hard fork which was one of the most famous airdrops, here are a few others:

Callisto token (CLO) was distributed to ETC holders (1:1) in March and there was a lot of excitement because CLO is a Cold Proof of Stake token. ETC price surged to a 6 month high in Satoshi terms.

Stellar Lumens held an airdrop of 16 billion tokens last year where every holder of Bitcoin got a proportionate amount of Lumens. The amount each recipient got was pegged to the percentage of total bitcoins in circulation owned by the recipient at the time of the snapshot.

Why do projects conduct these airdrops is a question often asked.

Airdrops are a good way to incentivize loyal holders to keep holding the token in face of price volatility. In fact, airdrops that have a dispersed frequency of snapshots are very effective in this as they do not reward short-term traders but only the long-term holders.

Some projects view this as a way of distribution and adoption that is better than an ICO. ICOs are risky for investors and losing trust due to various scams. They also have a long period of token distribution when the investor funds are locked. Lastly, the token value in an ICO is arbitrarily decided by the project team whereas in an airdrop it is decided by the free market once the token is traded on an exchange. Airdrops can be a good way to reach out to more users and expand the base with or without a public ICO.

The main reason for the rising popularity of airdrops is the marketing side. It creates awareness since more investors sign up for an airdrop that provides not downside but an unlimited upside rather than an ICO. When bounties such as social media sharing are attached to airdrops, projects can easily go viral. And if users sign up on the project website, it creates a database of leads which can be used for marketing further down the road.

Some of the interesting projects holding their airdrops in the near future are Everipedia, Biotron, Prandex, Kava, Fast Invest.

While there are always projects to look out for, sites like http://airdropaddict.com/ and https://airdropalert.com/ that are useful to track interesting airdrop opportunities.

How to launch an Airdrop?

A lot of decisions need to be taken into account while launching your own airdrop. It is wise to have a software to handle the airdrop. SnowFox Technologies provides an airdrop platform that is designed to spread the word while complying with regulatory requirements with their in-built KYC verification feature.

Snowfox Technologies has developed the Promo Token technology, which allows fast and efficient token distribution to potential investors so that up to 1,000,000 addresses can receive tokens at 5-10x cheaper compared to other solution on the market.

And for corporate entities who wish to integrate and create tokens in their businesses to increase the efficiency and customer trust, they help them design and set up a customized solution.

While there is no research or no statistics about the number of airdrops and the value created through them, it is apparent that airdrops are getting more popular than ICOs. With hundreds of them every month, this trend has just started.

Scams are everywhere in the crypto community. Airdrops are no different. Keep in mind that you should never send your private keys for an airdrop nor send any money or crypto for the airdrop. If you follow these guidelines, you will be safe and make some free money on the side.

Is there a future for Bitcoin in the online gaming industry?