Bitcoin price has been in a consolidation phase as investors wonder whether a bear market capitulation has set in. BTC was trading at $17,000 on Saturday, a few points above the year-to-date low of $15,470.

The BTC/USD price has moved sideways in the past few weeks as investors focus on the collapse of FTX. At its peak, FTX was the second-biggest cryptocurrency in the world after Binance.

The collapse of the company has led to a significant contagion in the industry. Crypto prices have sunk while hundreds of crypto companies like Gemini and Genesis have come under significant strains.

However, on a positive side, the collapse has led to hopes that the regulators will set clear rules in the industry. I believe that a solution can be made to ensure that big exchanges have disclosure mechanisms.

A good model would be the stress tests that big banks like Goldman Sachs, Morgan Stanley, and JP Morgan go through every year. Such stress tests could be made while ensuring that cryptocurrencies maintain the privacy of their customers.

Another model is where companies provide more open-source disclosures on their holdings. Companies like Binance and OKX have already started publishing their proof of reserves.

The next key catalyst for Bitcoin price will be the upcoming interest rate decision by the Federal Reserve. Economists expect that the Fed will hike interest rates by 0.50% after hiking by 0.75% in the past four meetings.

The main concern is that the US has published strong economic numbers recently. The economy added more than 286k jobs in November while wages grew by 5%. Therefore, the Fed could point to more rate hikes in 2023. It could also point to rates staying high for a while. Historically, risky assets like BTC and ETH tend to underperform in a period of high rates. 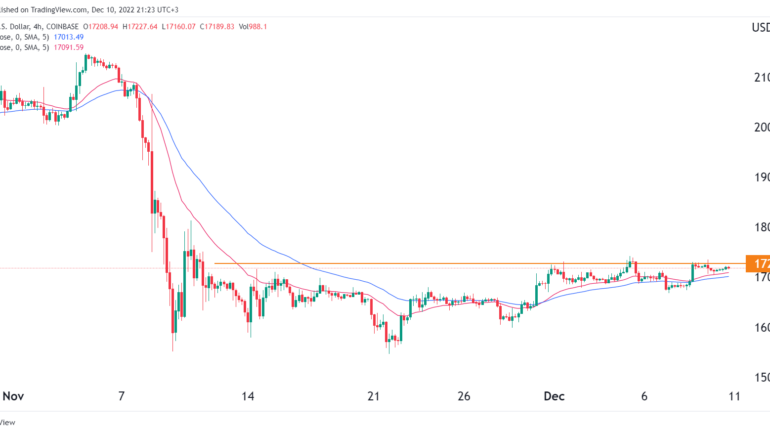 The four-hour chart shows that BTC price has been in a tight range recently. In this period, it has formed what looks like an inverted head and shoulders pattern. In price action analysis, this pattern is usually a bullish sign.

Bitcoin also remains slightly above the 25-day and 50-day moving averages. Therefore, the coin will likely have a bullish breakout towards the Fed meeting. If this happens, the next key level to watch will be $18,000.