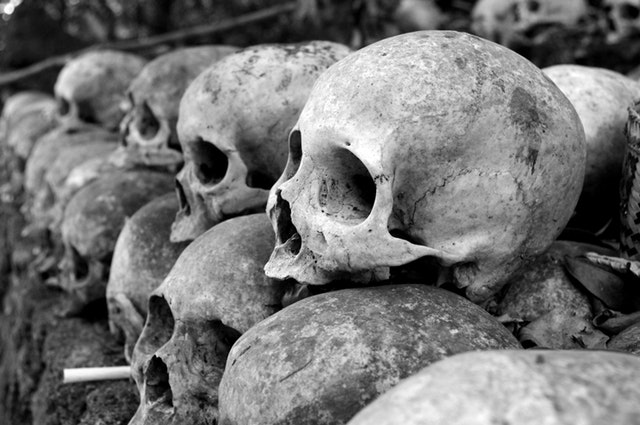 The fake news that Goldman Sachs has shelved plans to open a Bitcoin (BTC) and Crypto trading desk has been solely blamed for the crypto market turmoil that begun on the 5th of September and managed to sort of stabilize on the 9th. Many crypto-traders and enthusiasts were heartbroken that such fake news could be paraded as facts. They felt betrayed. Some pointed out that it was a lesson for thinking Wall Street will take cryptocurrencies to the next market Bull Run. It is with the above turmoil that many had declared Bitcoin is dead once again.

Turns out this is not the first time the King of Crypto has died. Forbes magazine managed to inform us that there is a tracker for the number of times Bitcoin has been declared dead by the media. Turns out that counter is at 309 times as can be seen in the screenshot below. 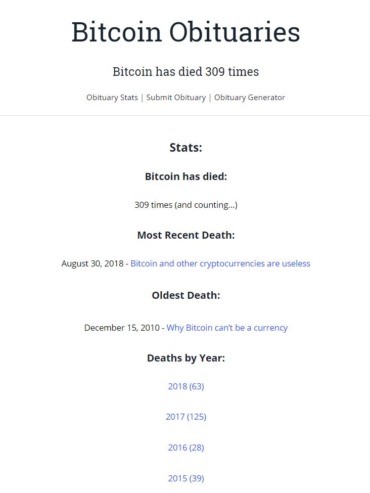 It is a bit hilarious when you think of it. After the smile, we realize that Bitcoin is not going anywhere. Neither is Ethereum, XRP or any of the other digital assets that have declined by large percentages in the last few days. As a matter of fact, if you are a seasoned trader, the current market decline is a normal occurrence from where you stand.

The author of the Forbes Magazine piece goes on to make light of the situation, for he too is a seasoned veteran of the crypto markets.

“The sense of urgency is everywhere I look. Bitcoin is dying, and it’s time to get a new job. The warnings are stark. Bitcoin’s price has lost 70% since its $20,000 peak last year, the Securities and Exchange Commission has rejected every bitcoin ETF it’s seen so far and Goldman Sachs has delayed its much-touted roll-out of bitcoin trading.”

Many of us crypto enthusiasts can be blamed for being too nostalgic with regards to last year’s Bull run that had BTC touch the sky at levels of $20,000. Yes, we wanted the gains to continue but with every peak in any financial market, there is bound to be a fall in value.

One needs to only look at nature and observe how ocean waves travel. The key in crypto trading is to become one with the market turmoil as a surfer does when he balances his board on a magnificent wave that would scare the living daylights out of any regular person. It is perhaps prudent to refer to ourselves henceforth, as crypto surfers!

Any BTC HODLer who has been around since the Mt. Gox saga of 2013 to 2014, knows that the King of Crypto had declined to as much as $0.01 due to a hack at the exchange in 2011. From April 2013 to early 2014, the exchange was at the top of its game as it was handing up-to 70% of all online BTC trading. But it all came crumbling down due to a news report that the customers of the exchange were experiencing delays in withdrawing funds from the platform. Some even had to wait a few weeks for the transactions to complete. (Where was Ripple back then to complete the transactions in 3 seconds?)

In conclusion, the current market turmoil is not new to Bitcoin and the crypto markets. One needs to look at the number of times Bitcoin has died for you to accept that it will die a few more times in the future as well. With such knowledge, we can easily recover psychologically from each dip rather than musing about totally cashing out and forgetting about that Lambo.

The Future of Cardano (ADA)