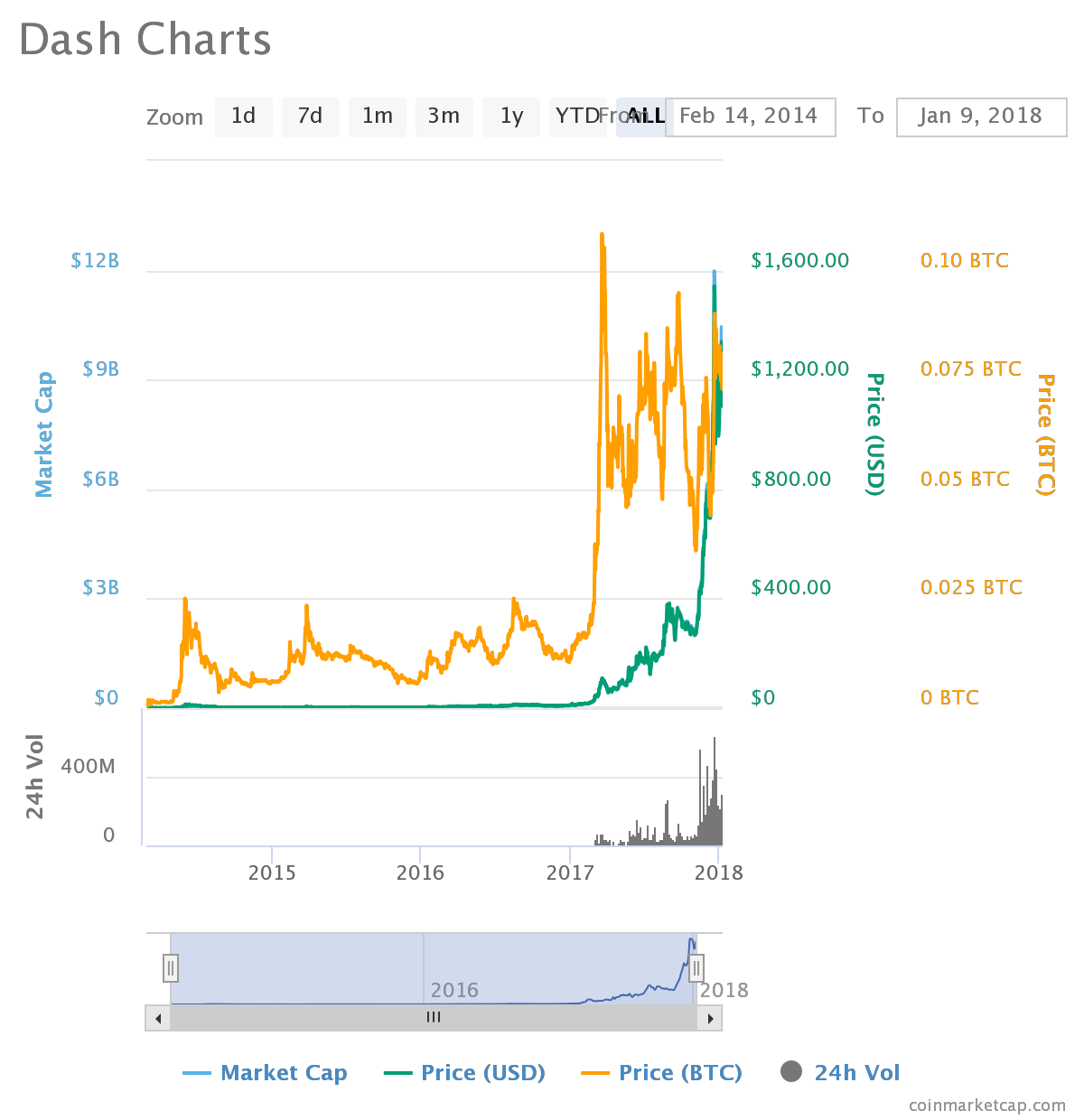 Things were going pretty well for Dash, having this cryptocurrency listed on top 10 most valuable and potentially profitable digital coins. It seems like Dash creators and investors had nothing to worry about. However, you must never get too comfy especially around competitors such as TRON. What happened and how did Dash come off the top 10 list?

Dash and Blast from the (recent) Past

Dash is doing pretty well even in the first few days of January as this digital coin received another increase. This time raising value for 5.91%, which brought in an amount of 1,325$ per only one coin – this is significantly higher than the majority of coins available on the market. So in case you have acquired Dash during its struggling years, you are probably going head over heels right now. But, regardless of the recent increase and the fact that Dash is stable with the acquired rising price per one coin, Dash lost a well-kept spot on the top ten list of best cryptocurrencies, now taking place number 11.

With a massive market cap of total 10,340,952,461$ and over 7 million Dash coins in circulation, Dash is more than profitable in the world of cryptocurrencies. Dash, short from Digital Cash, is one of the first coins to address the flaws in original digital coin, Bitcoin, that way working on implementing novelties that would make transactions even easier than it was with Bitcoin. Dash, of course, managed to do so, thus making it Bitcoin’s little brother that earns less but is worth more in practice.

When compared to Bitcoin, Dash has implemented novelties in the field of privacy, and quick transactions, where your transactions are untraceable by anyone and your address and amount of transactions are invisible, which isn’t the thing with Bitcoin. That is why Dash managed to jump up to the top 10 list of most valuable currencies available on the market of digital currencies.

But just like Dash made Bitcoin look less developed and even made it appear as a piece of old technology at times, now is Dash being pulled out from the top by a rather small coin, called Tron.

You have undoubtedly heard about Tronix (TRX) or otherwise known as Tron, a digital coin closely related to entertainment industry being operated on Tron decentralized platform that serves the purpose of supporting and helping the development of entertainment industry, making entertainment content easily accessible, more available for purchase and easily purchasable. On January the 4th TRX made it to the top 10 list, taking the 9th place while expelling Dash and sending it below the line. Now Dash is taking 11th place in the global coin rankings while Tron is collecting the glory of a newly established top-notch coin.

How Come TRX managed to replace Dash on the Top 10 List?

You might wonder how a small coin like Tron, only worth 0.17$ per one coin was able to replace Dash with its value of over 1000$ per one unit. The ranking, of course, doesn’t have anything to do with the price of either of mentioned coins. If we were to get by that sort of logic where top spots go to the coins with the higher price per one unit, Tron would be far from top 10 lists as it isn’t even worth a single dollar per one coin. So, what is going on?

Newer coins tend to address older coins’ flaws, continually striving towards improvements and coming up with something others didn’t think about, so you have different currencies promoting weed, gambling industry, art, science and technology and so on. Even though these coins are not as benevolent in price at the current moment, the purpose behind their existence is making those same coins more desirable, so at the end community and users who are believing in a new way of making transactions and exchanging goods are the ones keeping coins alive after all.

Since TRX is receiving more attention, interest for this coin has grown over time, so naturally, this coin is climbing up the ladder of top coins. Even though Dash is off the top 10 list, the newest ranking result doesn’t affect its value. Coins lose on value when something changes on the market, mostly when currencies are being more sold than bought or massively sold at lowest and sometimes under lowest price when 24-hour volume is taken into consideration. Hopefully, Dash investors won’t have to worry about that as Dash isn’t showing any signs of having potential meltdown and decrease in prices.

However, TRX is looking forward to new investors and partners, as although not yet official, Tronix founder has announced partnerships with several big companies that remain unnamed at this point.

All in all, 4th of January was a good day for TRX and Dash didn’t suffer as its price is still experiencing increases, making this coin even more worthy than it was the last year. TRX investors are looking forward to a successful year and Dash holders to take a break and enjoy as they are observing Dash coin rising and gaining in value.

We will be updating our subscribers as soon as we know more. For the latest on DASH, sign up below!

Related Topics:cryptoDASHDash cryptocurrency
Up Next

Monero (XMR): How Is One Of The Top Cryptocurrencies Doing After New Year?