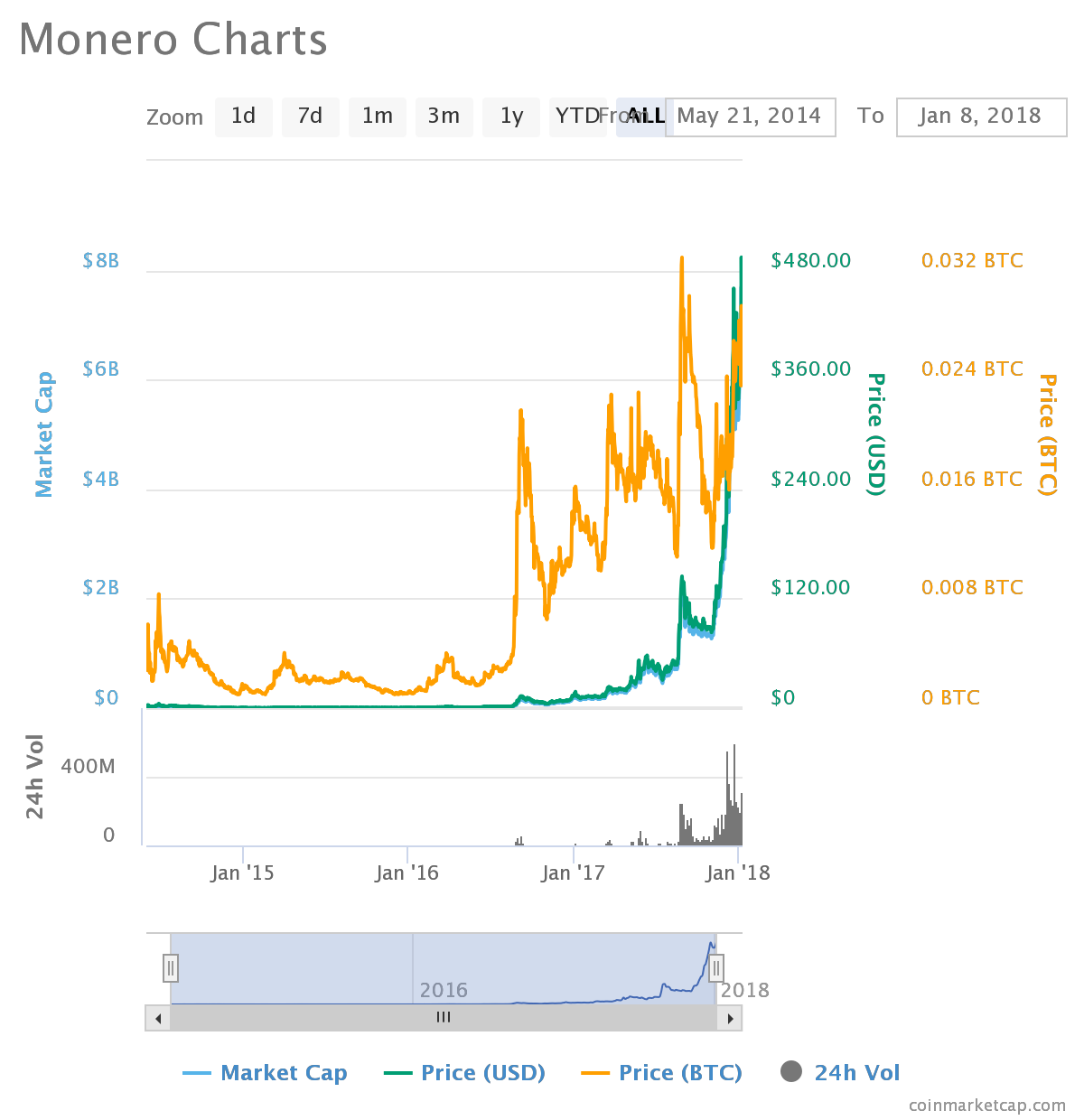 Even if you have only heard of cryptocurrencies like Litecoin, Bitcoin, and Ethereum, you must have heard of Monero somewhere along the way. Monero is one of the most significant and most valuable coins within the circles of digital currencies and blockchain based technology systems, promising to grow beyond its current value. But, how is Monero doing in 2018 after New Years’ eve and how this digital coin managed to increase to its present value?

Everything you need to Know about Monero

Monero was launched in 2014 and with its appearance, this coin changed the by far familiar blockchain system of protection and function. Although launching and previous design of this coin was inspired by Bitcoin that slowly started to grow during that time, Monero is operating with types of algorithms that are different than the way Bitcoin is operating. To get into specifics, Monero was designed and based on CryptoNight PoW, which is a derivate from CryptoNote system. This is very important for overall security and strength of protection behind cryptocurrencies and digital exchanges of monetary values. Thanks to this algorithm system, all coins that are suspicious and come from suspicious addresses can be banned and refused by other users that are getting involved with direct transactions with Monero, unlike the case with Bitcoin.

At the beginning of Monero, this digital coin had some flaws that were immediately resolved and modified into making a functional and valuable coin with the protection of all parties involved in transactions. At first, Monero had problems with recognizing transactions on both ends, so one of the parties involved in that transaction anonymously attacked Monero and the way they were operating at the time. Monero creators didn’t waste any time so they patched that flaw and improved the way transactions are being made, now having three layers of protecting privacy. One way of having your privacy protected when going through the process of transactions with Monero lies in the fact that you can refuse to exchange transaction in case you find it suspicious – the address with a proven suspicious address can also be banned. Thanks to the ring signatures, the sender is protected by having his transaction camouflaged with other transactions being simultaneously made by other users, making any specific transaction untraceable. Stealth address availability helps both parties by hiding the address of receiving parties, keeping the transaction anonymous for any side party that can be viewed as a third party and RingCT feature works on hiding the amount of transaction that is in the process of being sent. All these features combined make Monero very safe and practical to use so it’s no wonder Monero has grown to be one of the big guys in the world of digital currencies in a matter of only three years.

To start off with general value and functionality, Monero is one of the oldest and most functional cryptocurrencies that are not on the top of the top by accident. Thanks to its improved privacy where identities and addresses of senders and receivers are being protected and kept untraceable, Monero makes transactions done simply and quickly in only a couple of clicks with no third parties or excessive fees involved. That is at the same time the main reason for having Monero where it is today.

Unlike many other cryptocurrencies that started to grow in price only one month ago with the massive expansion of multiple digital coins, Monero managed to establish its stability a long time ago probably thanks to its privacy and improved functionality based on PoW and untraceable transactions.

Another important factor for having Monero grow to be as large as it is today is the fact that this digital coin was stirring up the market with privacy innovations long before crypto coins acquired popularity and increased demand. That is how Monero had enough time till the current date to expand, improve and establish its functionality taking the top charts among the crypto community.

Today, experiencing an additional increase in value as of the beginning of 2018, Monero is worth the amazing 474.61$ with the market cap of over 7.3 billion dollars and with over 334 million coins in circulation which make it one of the most valuable coins currently available on the market.

Monero is still worth investing for anyone believing that this coin could easily overpass Bitcoin’s and Ethereum’s price altogether. With stable growth this coin has now, it is expected that the coin might grow to be worth a couple of thousands of dollars by the end of the year. Of course, that would be the expected result in the best case scenario where Monero would continue with value increase at the same or faster pace it had at the beginning of January of 2018 and in December of 2017.

In case you had run across Monero long before the big bang of digital coins, back in 2014 and 2015 when Monero was far from being the next great thing, you probably feel lucky at the moment, seeing this golden coin getting on popularity and consequently having its value increased.