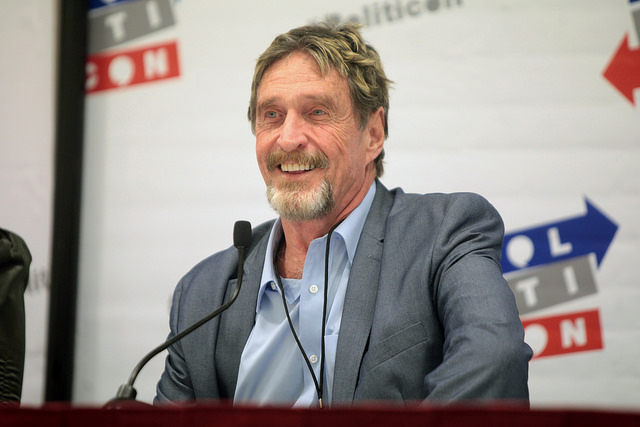 John McAfee, the founder of the McAfee antivirus gave his thoughts about various cryptocurrencies last week, including Verge (XVG), Monero and Zcash through Twitter’s microblogging platform. However, his tweet about Verge seems to have been quite weighty because the price of the altcoin ended up doubling overnight.

“I am inundated by people asking me for recommendations on cryptocurrencies. If you would use your heads you would figure out that the privacy coins (anonymous transactions) will have the greatest future. Coins like Monero (XMR), Verge (XVG), or Zcash (ZEC) cannot lose,” stated McAfee in a tweet.

I am inundated by people asking me for recommendations on cryptocurrencies. If you would use your heads you would figure out that the privacy coins (anonymous transactions) will have the greatest future. Coins like Monero (XMR), Verge (XVG), or Zcash (ZEC) cannot lose.

The cybersecurity guru’s tweet seems to have created a big impact considering the fact that the price of Verge went up by 100 percent. It also highlights the fact that McAfee has some influence in the cryptocurrency community. He has been known to be quite vocal about cryptocurrencies and is especially biased towards digital currencies that are focused on Privacy, such as Verge, Zcash, and Monero.

Zcash and Monero are top performers in the cryptocurrency game as far as market cap is concerned. The fact that he mentioned them together with Verge seems to have encouraged a positive investor outlook on Verge. The price of the digital currency went up from $0.009367 on December 13th to $0.131282 on December 20th. Verge currently has a market cap of $1,897,663,154 and is currently holding down the 20th position in the cryptocurrency ranking.

It is interesting that McAfee believes that cryptocurrencies that focus on privacy will emerge on top in the future. Such currencies have been growing more popular but then again the future is full of uncertainty. It is also a bold claim especially considering that governments from all over the world are trying to get some degree of control over cryptocurrency transactions. This is one of the reasons why some digital coins focus on privacy.

Meanwhile, the security guru also described XVG as one of the best altcoins to purchase currently. However, he also advised investors to be careful when selecting the altcoins they want to invest in because there is a lot of risks involved. As for Verge, its recent surge was quite impressive but it is also worth noting that it also tanked slightly after that. However, investors are watching keenly to see how the digital currency will behave especially now that it has been tossed into the spotlight by McAfee.

McAfee has also talked about Bitcoin in the past and even went as far as stating that the price of bitcoin will go up to $1 million. However, a lot of people believe that that forecast might be too ambitious.

Augur (REP) Soars To New High After Its Price Doubled