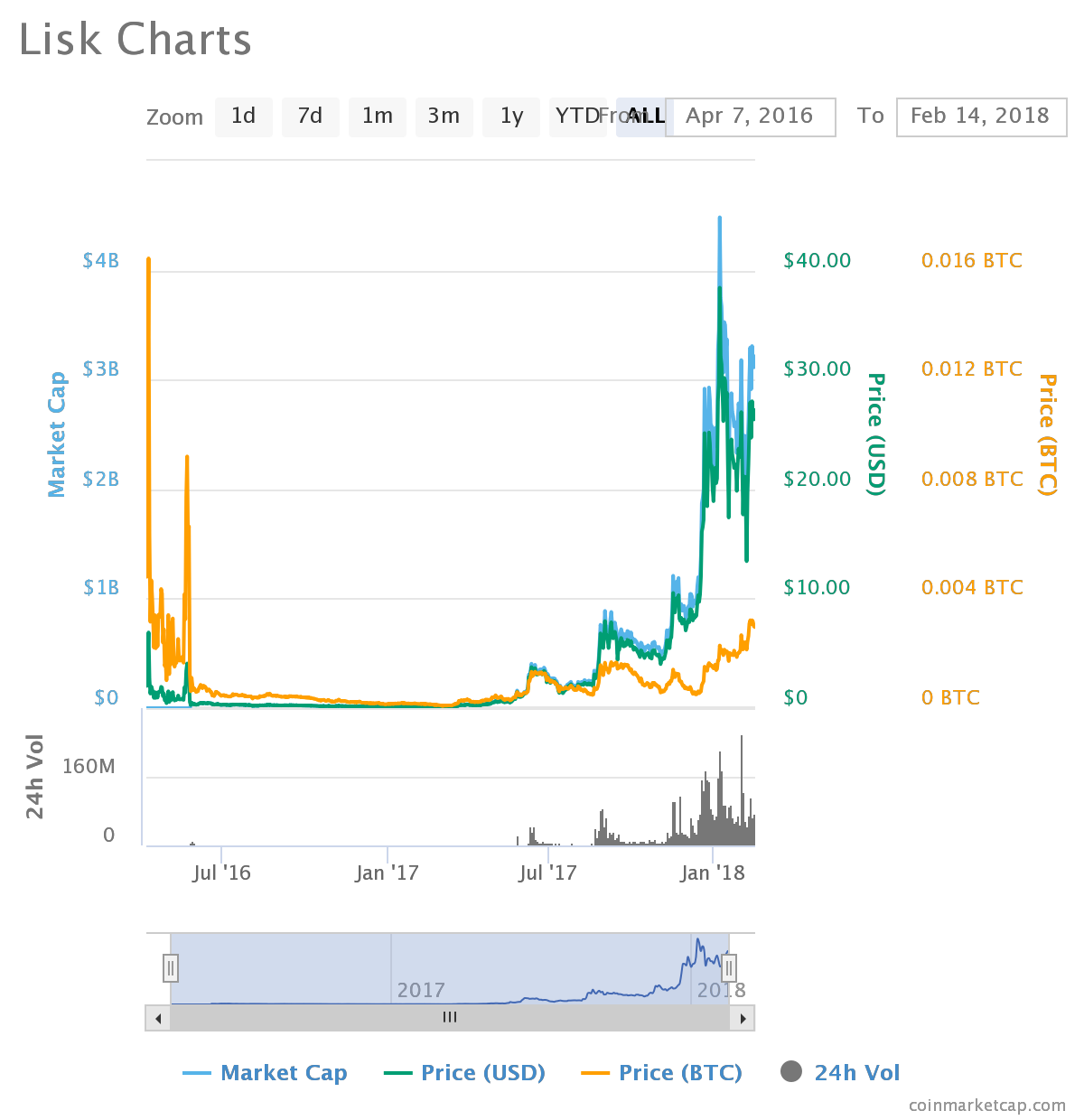 Lisk has been climbing up dizzily, going for increases one after another in a row. Thanks to the recent announcement of having LSK re-launched on February 20th in Berlin, the token started to grow, openly showing investors that Lisk represents more than an exciting coin – it makes a good solid investment. That is why we decided to dig out as much as we can about this token and see if we could predict what will happen to Lisk in the following months.

What is Lisk and why does it Matter?

Lisk can be viewed upon as NEO’s and Ethereum’s little brother. If you compare to any coin or decentralized platform out there, you will surely notice that Lisk still has the most similarities with these two platforms. This is the case because the main idea behind LSK tokens and Lisk network is to enable all users that are interested, to develop and launch their own application within the Lisk network.

The network is based on blockchain just like it is the case with any other decentralized digital tokens and platforms. But, unlike many other tokens and platforms, similar to NEO and Ethereum, this token supports a large network that is set to enable all users to make their own apps, upload them and put them to good use.

Regardless of what type of app you have in mind, in case you know how to work in JavaScript, you are free to program your own application. In case you would like to upload it to the Lisk network, you would need to make an account, download Lisk wallet and buy some Lisk coins and you would be good to go.

For all of those who have no clue what to do with JavaScript, you can still become a part of this network as a user and investor. Only, buying LSK tokens in bulks won’t be that easy now after February 6th.

Lisk and the Announcement of Re-launch

Things started to really work in favor of Lisk when the developers of this network with LSK as its main token announced the re-launching of this promising decentralized platform. New changes, as announced, should bring in more investors and even more users and app developers that could contribute to the development of this token and its platform.

The announced changes should be applied on February 20th, when the developers should represent new Lisk network with renewed and improved features. The great event will be hosted in Berlin in only 10 days from now and it should mean a great deal for all Lisk developers, investors, and users. The changes are said to be focused on improving the general user experience, which may easily be the reason for having Lisk progressing so fast when it comes to the interest of new investors and the increased number of LSK token users.

After the announced date, LSK tokens along with its mother platform should be known under a different name. There will also be the presenting of the new logo, interface, wallet and a couple of improved protocols. All these changes should improve Lisk and get it ready and all set up for new members, developers and hopefully lots of new investors and partnerships.

How is LSK Doing Right Now?

In case you are an LSK holder, user o investor, you surely know than Lisk is doing more than exceptionally well. After February the 6th when 40% of the total market cap of all digital tokens was lost due to extensive and radical decreases, only a day after the original massive drop, Lisk was brought back from the dead with amazing increases coming its way.

So, in case you have bought Lisk during the selloff on February the 6th when this currency was only worth somewhere around 11$ per one unit, you are probably feeling pretty lucky now.

After only a single day after a great loss of 40% in total market capitalization of all coins, Lisk had a major increase, which initially made this token worth more than 19$ per one unit. That wasn’t all from LSK, as this token continues with increases. With all increases combines, LSK is now worth 27.66$ per one coin and it looks like the increases won’t stop here.

The latest decrease made LSK trade on all major exchanges for 7% up against the dollar and 3.21% against BTC. So, basically, LSK investors and holders are probably going wild right now.

The reason for having LSK tokens grow so quickly is probably connected to the latest announcement of changes being applied within Lisk blockchain system, where it is also said that operating with side chains will also be possible. If everything goes well after the changes, Lisk is “threatening” to become one of the big coins with a large operational platform and growing members and investors.

As far as the market capitalization concerned, Lisk is ranked at 13th place, while it is settled at a 14th place on the global coin ranking list. Can it get any better? It can and it probably will as Lisk is literally pumped up and ready for new victories. The best time for buying Lisk at low prices has probably gone by a couple of days ago, but there is still a chance for all serious investors to buy LSK tokens while tokens are still worth less than 30$ per one unit. In case this token would continue with growing at its current pace, Lisk will be going to the moon. And, in a matter of only several months, this token could easily hit 100$ per unit and even more. This would be the case only if the applied changes would go as a success and in case there are no major drops in price.