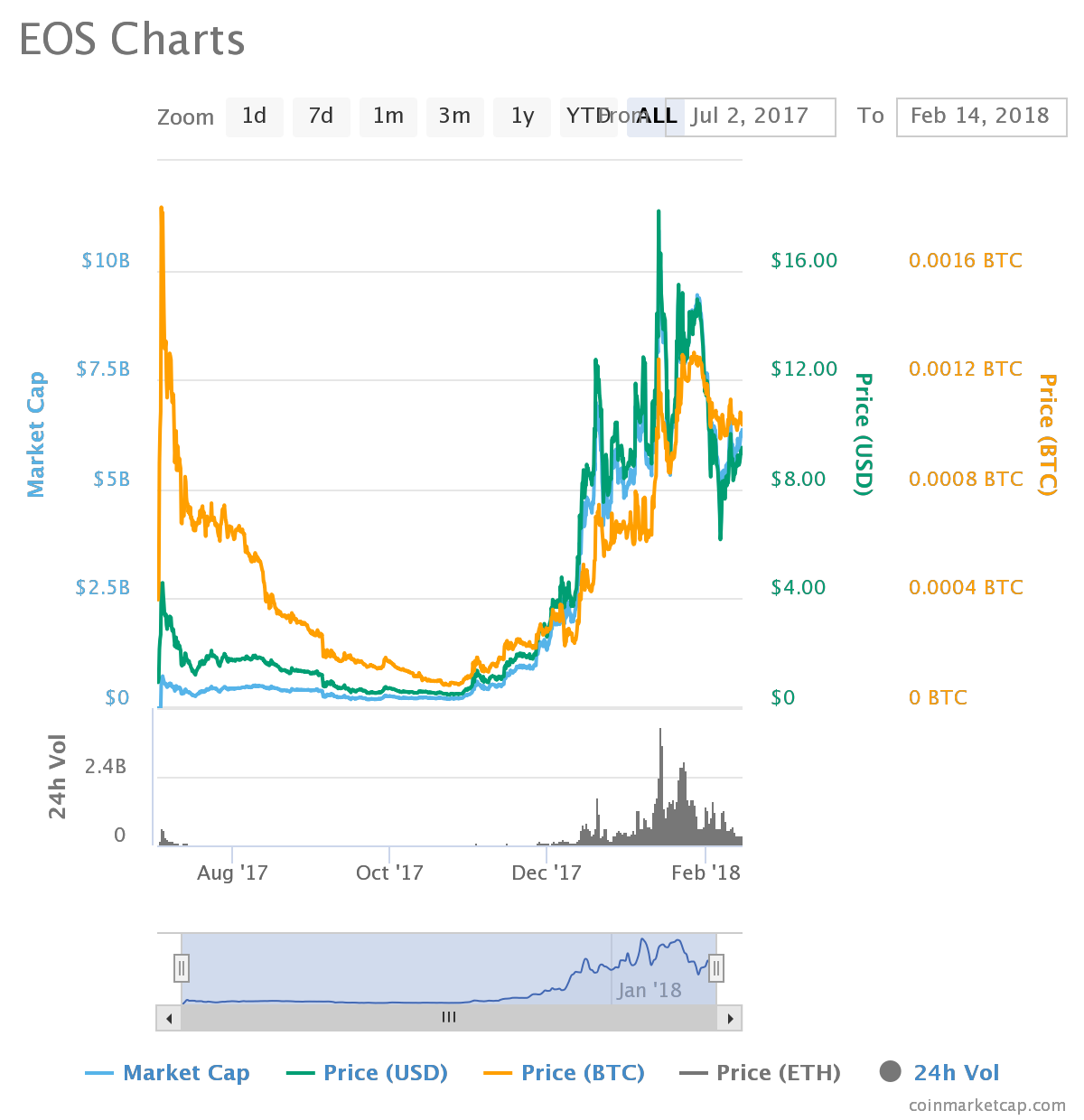 EOS seems to be doing pretty well even though lots of big currencies out there are dizzily dropping. From being launched less than a year ago, this coin is said to be progressing pretty rapidly, already ranked the 9th coin on the global coin ranking list. This case poses the question: Is it possible for EOS to “take down” Ethereum in the following months?

What is EOS all about?

When talking about EOS, it is probably the easiest to compare it to Ethereum. This digital coin functions similarly to one of the biggest decentralized networks in the market, which is perhaps the reason why this coin is getting so much for its popularity.

Just like ETH, the main Ethereum’s currency has Ethereum as its parental platform, EOS has Block.one. Block.one is a decentralized platform based on blockchain technology with the ability to host multiple different applications that can be easily uploaded by developers who are also EOS token holders. The platform enables fast transactions with full encryption and with a warranty that all transactions are made to be safe, secure and without having third parties earning on the transactions that members of Block.one are making. The idea behind this platform is to create a patchwork that can be programmed.

What is probably the most interesting thing with EOS is the EOS.IO blockchain software that developers behind this platform are working on. The initial software should improve the network and make it even easier to use, offering a user-friendly experience. The system is intended to improve the bandwidth of the network, which means faster CPU, storage, RAM, enabled voting and enabling multiple block creators to easily change and improve the system software.

This should result in faster transactions and overall faster operations within the network, as well as the ability to vote in favor of or against the changes being announced.

Another thing that most possibly influenced the rapid progress of this coin is probably the recent meet up of Korea’s EOS.IO and Block.one platform. Korea holds the 5th place in the world as one of the best countries with most advanced knowledge in Information and Communication Technologies, so it is no wonder that EOS is progressing at the current pace given the fact that they have plans for implementing some very flattering solutions.

The main idea behind this meet up is to have new companies and industries joining the network of EOS as well as implementing another token of value that would be accepted as well as EOS within Block.one decentralized platform. Some of the solutions intended for implementation lie in scalability and flexibility of this decentralized platform as well as adding Richard Jung as a leader in Korea’s community of developers.

If everything goes well with the new systems and protocols being implemented, it is expected that EOS will most likely have another series of massive increases in the following months.

EOS set to take down Ethereum?

Many people are speculating that a platform like Block.one with EOS as its main token of value could easily take down Ethereum. Can this case scenario be true?

Most probably, yes. Given the fact that EOS is being traded at 9$ per one coin while Ethereum costs nearly 100 times more per one unit against the dollar, investors are more likely to be focused on buying EOS rather than investing in Ethereum. This is a perfectly normal scenario – let’s imagine that you walk into a store and see two jackets: now the jackets may be a bit different in color, but they are made out of the same material and in the same way. There is one difference though: one of the jackets costs 9$ while the other costs 800$. Which jacket do you buy?

The answer would probably be redundant.

Now that EOS is rapidly progressing with reaching the price of 8.73$ even after a decrease that went up to -6% against the dollar, Ethereum seems to be “threatened” by another similar platform that does the same work – only at an improved pace.

It is said that EOS is now even having faster transactions that can be easily done in no more than 1 to 10 ms of runtime, which probably adds to its value.

With its current state, EOS with its platform Block.one is enjoying the perks of being listed at 9th spot of the global coin ranking list, now being side by side with big coins.

If we take into consideration that EOS has managed to make exceptional progress in only a couple of months of its lifetime, this digital coin is already carrying a promise to become one of the top coins on the market, and not just a top ten coin on the list.

If you add the fact that Ethereum is falling to despair with constant decrease that has made this coin drop for over 400$ per one coin, which is a pretty tough loss, EOS can easily take Ethereum’s place by the end of the year. This would be the case only in case Block.one would perform flawlessly, that way inviting new investors and making old investors stick around without selling off the coins.

The way things are working for EOS now, tells us that this digital coin is on the road to increase its trading volume, also increasing the price per one coin possibly to 20$ by the end of March. This would be the case only in a scenario where this token wouldn’t be experiencing massive and often decreases. All in all, it seems that 2018 is going to be more than favorable for EOS.

Lisk (LSK): Why You Should Definitely Check Out Lisk

Cardano (ADA): Reasons Why Cardano Might Be Your Next Big Investment