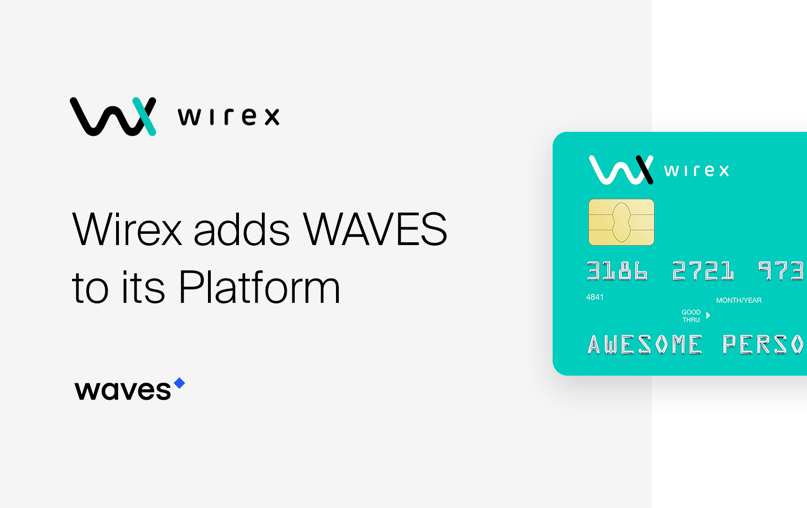 London UK, January 10th2018 – Wirex, the UK FCA-licenced digital money platform that facilitates the seamless conversion of cryptos and traditional currency, has joined forces with Waves to add the in-demand WAVES token to its platform. The WAVES token holds a unique place in the cryptocurrency spectrum because its underlying utility addresses some critical hurdles that hinder the mainstream adoption of blockchain technology, such as scaling, interoperability, and security.

Sasha Ivanov, CEO and Founder of Waves Platform, says, “We see Waves as the bridge that will facilitate the transition from web 2.0 to web 3.0. The goal of our team is to put tools in place that will allow both enterprise and individuals to easily implement their own blockchains while improving the UX of DApps and blockchain infrastructure.”

Like Wirex, the Waves Platform was purpose-built, and since its launch in 2016, Waves has become one of the fastest, most secure and user-friendly public blockchain platforms available.

In terms of its underlying protocol Waves is closer to Ethereum than Bitcoin. Ethereum is used to develop various DApps, but it can be expensive due to its Smart Contract language complexity and Gas fees that can grow dramatically over time. Waves Smart Contracts are simplified – they are a plug-and-play solution with fixed fees. Another improvement is the Waves-NG protocol with throughput of up to 1000 TX/s.

Pavel Matveev, CEO and Co-founder of Wirex, comments,“ While the Waves Platform is a bridge between the web and blockchain, we are a bridge between traditional and digital currencies. Together we solve many pain points in the industry. Our platform provides extra liquidity for cryptocurrencies and gives investors the ability to convert and spend their crypto instantly with our Wirex Visa card. Investors who buy WAVES through our platform will know they are with a safe, agile, cost-effective service. In addition, our existing users will have another strong and popular token to add to their portfolios.”

The Waves Platform also has benefits for miners. Individuals who want to mine WAVES tokens don’t have to run a node themselves; rather, they can lease their wallet balance to someone who does. It basically offers built-in mining pool functionality that gives users even more flexibility.

Dmitry Lazarichev, CEO and Co-founder of Wirex, says, “With our aim to collaborate with the best companies to produce innovative solutions in the crypto space, we recognised Waves as a highly professional and cutting-edge project and look forward to growing the relationship.”

Wirex is a UK based, FCA-registered international digital money payment platform that forged new rules in the digital money arena. They are a payment platform that offers five cryptocurrency wallets – BTC, ETH, XRP, LTC, and WAVES, as well as traditional currencies. They gave the world their first ever Wirex Visa card that lets users convert and spend cryptocurrency instantly – from USD to Bitcoin, from XRP to Sterling. Wirex also launched Cryptoback™ – the world’s first Bitcoin rewards programme. It pays users 0.5% of their transactions back in Bitcoin, every time they tap, swipe or use their card at a point of sale. Now Wirex has over 2 million customers in 130 countries.

Waves is a global blockchain platform launched in 2016. Waves’ mission is to build a blockchain ecosystem that allows users to address a wide range of real-world problems. The Waves team is creating a blockchain infrastructure with easy-to-use tools for individuals, developers, and businesses. In April, 2017, Waves successfully launched its DEX (decentralised exchange), a fast and safe tool for trading the most popular cryptocurrencies. In late 2017 Waves-NG protocol was activated, enabling unprecedented throughput of up to 1,000 tx/s, whilst reducing transaction confirmation times to just seconds. In September 2018, Smart Accounts became available on the Waves Platform as the first stage of Waves Turing complete Smart Contracts launch.

Lost Money When BTC Plunged? Here is How I Earned Back!