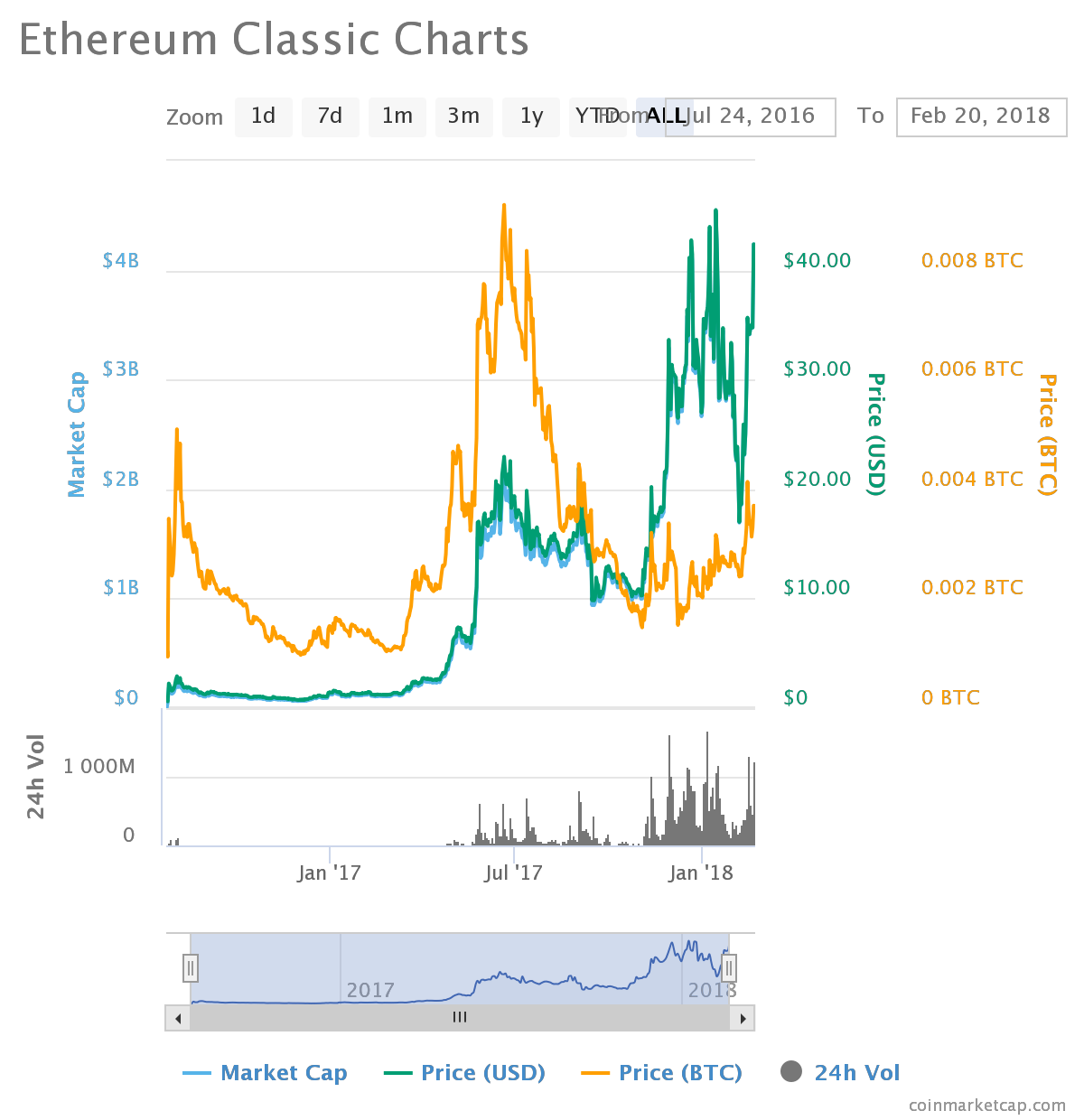 Ethereum Classic is one of those crypto “offsprings” that we weren’t sure would make it far, at least not over the long run and with all the fuss about having ETC potentially existing on illegal terms in the future. However, the last couple of days are telling a different story about ETC as this token was hitting the roof with its rising price. Many have expected that, but in favor of those who have not, we are compiling a reminder on what Ethereum Classic is all about and how come this token could potentially become illegal in the future where decentralized platforms could be possibly regulated. And, of course, we are all interested in predicting ETC’s future progress.

A little about Ethereum Classic

Ethereum Classic wouldn’t be possible to exist if it weren’t for that infamous stealth that wiped away over 3.6 million ETH. In case you don’t remember, the stealth happened thanks to the flaw existing within the core system of DAO. DAO, abbreviated from Decentralized Autonomous Organization, was created to allow users to easily fund projects through Ethereum platform, but since there was a flaw within the system, there was a loop that allowed the anonymous hacker to almost effortlessly take the money stored within DAO. How did this happen?

DAO was used to fund different projects easily through the model of smart contracts Ethereum is famous for. All members of the community could thus fund DAO account to help out the projects they liked. However, the thing about DAO funding is that the developers allowed all participants to retrieve their donations in case they would change their mind about supporting a certain project. That wouldn’t be trouble if DAO didn’t have a safe period policy, where the retrieving money had to stay within the system for some time before being returned to the owner. During that time, the money being retrieved didn’t belong either to the project or the original owner but existed in sort of an escrow ecosystem, which initially created the loop that the hacker could easily take advantage of.

Since that infamous occasion, Ethereum platform decided to go hard fork and change the entire system, making it impossible for all coin holders and members to use the platform normally unless they have accepted all applied changes in the form of updating their system. Lots of people found that case favorable, so they switched to hard fork, but other didn’t want to change anything, so they remained as users of the previous model of Ethereum platform. That is how Ethereum Classic was born, which leads us to the fact that in case there would be some serious regulations brought into the light in the far or near future, Ethereum Classic would be considered to be illegal. How come?

Ethereum Classic doesn’t run on its own platform – it exists on top of Ethereum’s original platform before the hard fork was implemented, so many experts believe that this case could be considered to be illegal in the future.

This can, of course, be prevented with more regulations, but the guess is that we will have to wait and see since this is a purely speculative presumption, although based on a factual case.

For now, Ethereum’s “offspring” seems to be doing pretty well within its newly developed community of people who chose to remain faithful to the soft fork.

How is Ethereum Classic doing at the current moment?

The ones that chose the soft fork as a more favorable option are probably getting excited as their token of choice is hitting the green field of rises when all other currencies are seeing bad days.

Even though Ethereum Classic has still a long way to go until it reaches the price ETH has at the current moment, ETC is doing pretty fine by itself.

Even after the latest drop, ETC has a price that is encouraging ETC holders’ decision to stick with the “old ways” and deny going under the hard fork. Ethereum Classic is currently among the top 20 cryptocurrencies, holding the 16th place on the global coin ranking list and judging by everything, this coin is here to stay.

What 2018 Could Bring to Ethereum Classic?

You can’t ignore the fact that Ethereum Classic holders might be some of the most faithful crypto coin users (besides maybe the DOGEcoin community) as this fact might give you an insight into the circulation of ETC. You can easily conclude based on that fact that ETC users and investors would rather buy more of these tokens than sell the ones they have, so ETC seems to be immune to selloffs – at least for now.

If Ethereum was to continue at the same pace, by the end of 2018, this token could easily get close to being worth at least a 100$ per one unit, which would be a major success for Ethereum Classic and its users.

However, we must always have in mind that drops and rises are pretty much unpredictable to the core so that anything can happen in the following months. Still, one remains for sure – Ethereum Classic is doing great at this moment.

Related Topics:ETCETHEthereum Classic. rising
Up Next