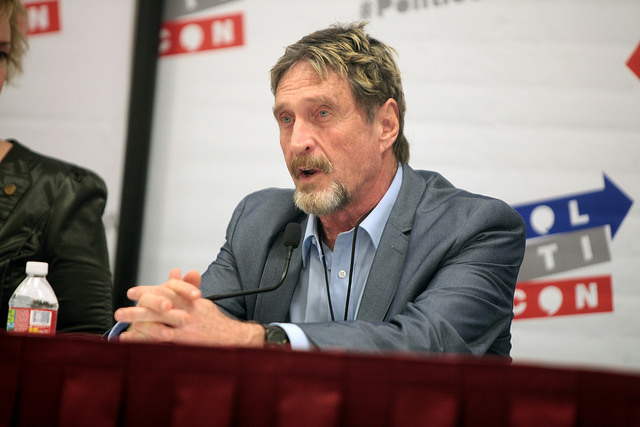 Known for his well-timed predictions (and their explosive results) within the cryptocurrency community, John McAfee is in the headlines again, going underground as the Securities and Exchange Commission (SEC) attempts to silence his voice. A vocal critic of the SEC, McAfee has taken to Twitter to update his followers on current developments as the SEC has allegedly infiltrated his property, disturbing McAffee’s peace and forcing the hand of a man most famously known for his wild Bitcoin predictions.

Perhaps the most vocal and angry critic of the SEC, McAfee has spoken out numerous times concerning the commission’s actions to destroy value in the market. Now, with an increase in suspicious activity happening around his home in Tennessee, his twitter feed has lit up with the dramatic unfolding of this newest dilemma. With the entire story unfolding via social media, we need to look no further than Twitter and Youtube for updates. The official story, however, has been told by Rob Loggia on his increasingly popular website.

While easily passed off as paranoid by the mainstream media, McAfee’s security detail sees current developments differently. As an example, Jimmy Watson, a former Navy Seal hired by McAfee for protection has stated,

“All of my instincts point in one direction. We’ve had a white single-engine plane circle the property at low altitude for almost an hour. It has visited us several times. That’s not normal.”

Other abnormal instances include vehicles with passengers trying to obscure their faces as they take off at high speed, and apparent human activity leaving traces in the tall grass surrounding McAfee’s home. Needless to say, McAffee has felt it necessary to leave the safety of his cul de sac, and reveal his truths from an undisclosed location, traveling via armed motorcade.

While there is no direct connection to the recent visits and the SEC, McAfee is again speaking out against the commission and its overwhelming intrusions into our civil liberties. Having been targeted by the commission in the past, McAfee believes it is them making life difficult once again.

The SEC has made headlines recently with their meddling into the affairs of a few big-name cryptocurrencies. Ripple (XRP) has now been targeted and is quickly mounting a defense (or at least creating a new logo) to distance the currency (XRP) from Ripple the company. The SEC is waiting to make up its mind as what truly constitutes a security in the crypto-universe, and the fate of Ripple’s (XRP) value is again held in limbo to the consternation of hodlers across the market.

While the SEC intrusion makes waves through the daily headlines of our favorite crypto news sites, its decision (either way) speaks volumes to McAfee’s discussion on the commission’s overreach. And while the verdict is yet to officially come out, the damage is being done in front of our eyes, as the SEC once again affects the value of Ripple (XRP) and the market as a whole.

Cardano big bag of tricks Capable of Obliterating every other Blockchain