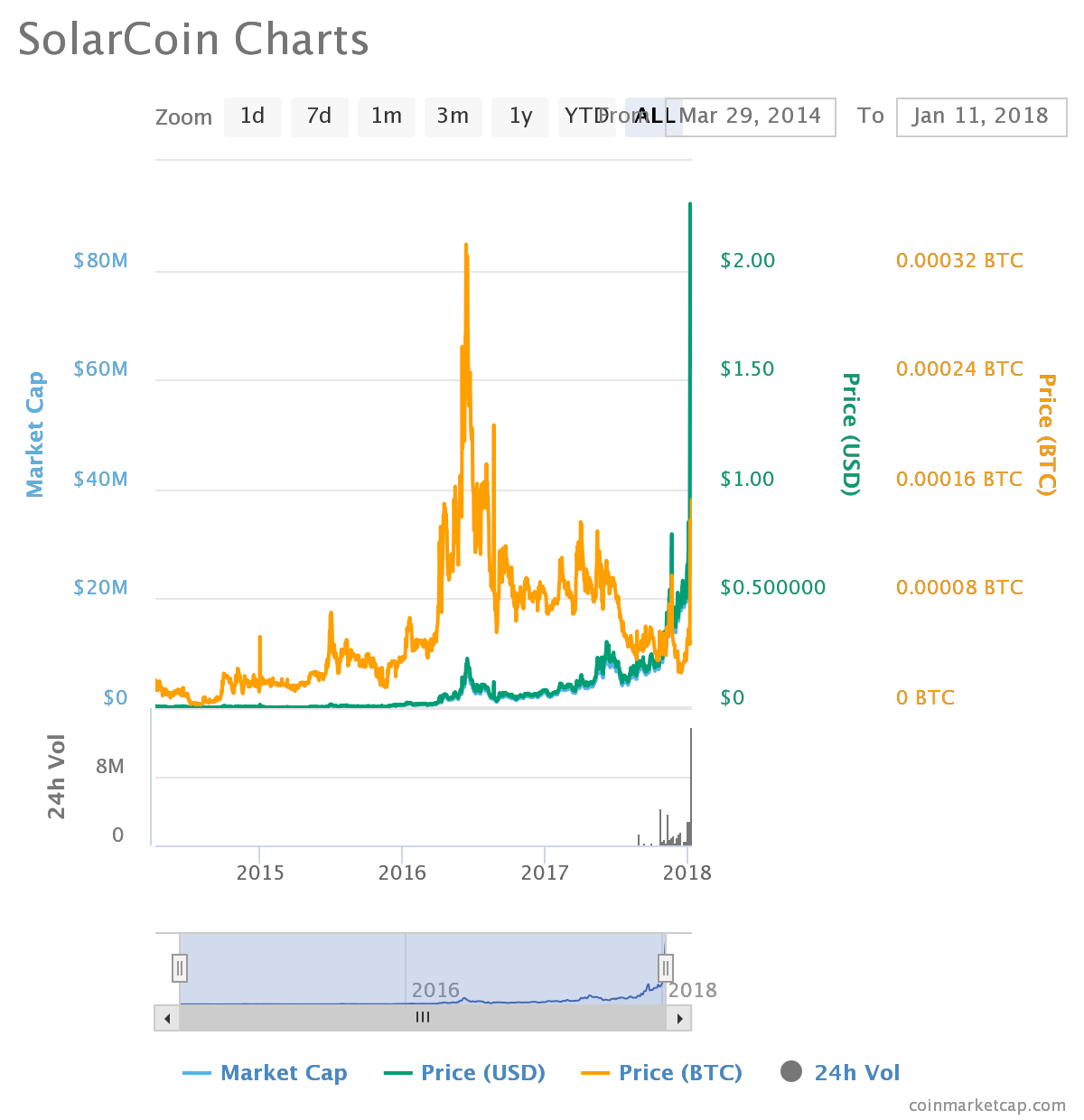 With the recent decrease in price, SolarCoin is now worth 1.71$ per one unit, which is still a success when compared to prices of multiple coins in circulation. To present SLR better to the public and all of those who have just heard about SolarCoin, we are writing about everything that makes this coin specific and standing out from other cryptocurrencies.

As you can probably conclude based on the name of this coin, this cryptocurrency is closely related to solar electricity. This coin was launched and generated in 2014, which is the year when many different coins went into circulation. As well as all other coins, this coin is also based on blockchain technology, although it operates in two different ways. SolarCoin uses two types of proof of work, where one proof of work is related to the part of SLR that represents digital currencies so that the coin can be operated in performing transactions. The other type of proof of work system is related to the feature that makes SolarCoin unique and helps it stand out from the crowd of different digital coins. The second type of proof of work works in a way that allows the system of reward to function correctly. SolarCoin is made to reward 1MWh of solar electricity that is generated through the usage of SLR.

SLR system is made to support environment and the most cost-effective and environment-friendly source of electric energy – solar electricity. To make the “deal” even more interesting for users and investors, “solar” rhymes with “dollar.” It’s a joke, yes, and not a particularly good one.

To get back to the point of discussion, which is SLR, SolarCoin is made to generate solar electricity with SLR usage for the next 40 years where users would be awarded solar electricity. The second type of proof of work includes a third party, which is not the case when making transactions with SLR as all transactions are done by the model of encrypted blockchain technology that allows privacy and cost-effective transactions with only two parties involved. But, for the second type of proof of work, the third party is used for verification purposes when awarding MWh. The amount of solar electricity to be generated over the course of 40 years is set and limited to 97.500 TWh. SolarCoin can be obtained and used only by people who have solar panels installed on their property because this coin is backed up with solar energy, that way promoting this cost-effective and environment-friendly form of energy production.

This coin is mineable, but mining is only available through solar energy production, and that is why obtaining SLR is only made possible in case you are supporting the promotion of solar energy by using solar energy and having solar panels installed on your property.

Features that make SLR different than other Coins

At first, SLR was using proof of work system, otherwise known as PoW, but after 2014, this coin is using Proof of Stake Time, PoST, which is contributing to the more economical use of this coin. PoST is supporting mining for SolarCoin although this coin is only available for mining through the production of solar energy. But what PoST does for this coin is contributing the increase in price per one unit, which is a pretty benevolent “side effect.”

Another thing that makes SLR stand out from the crowd is the fact that this coin is made with the purpose of supporting and promoting solar energy production, that way also being included in active promotion of environmental protection and general improvement regarding how people treat the planet we live. Their cause is supported by numerous researchers that prove that solar energy is the most cost-effective way of producing and using electricity, as well as making it one of the most environment-friendly methods of using and generating power because the sun is thought to be an inexhaustible source of energy. That is how you get a handy and cost-effective equation where blockchain technology paired up with solar energy production equals the monetary value that grows with the production of solar energy. That is how SLR managed to reach a price of over one dollar per unit, although it belongs to altcoin team.

Where is SLR at Now?

SLR is currently worth 1.71$ per one coin, which is the price after a recent decrease of value which was -12.74% in total. SolarCoin thus currently has 66$ million in market cap with 38.6 million coins in circulation.

Even though the coin has been through a recent decrease, the price per one unit is still over a dollar and even close to acquiring the value of 2 dollars per one coin, so it seems that SolarCoin is doing pretty well when compared to other coins and standing for itself.

It is predicted that 2018 will bring more increases for multiple coins, and if current users continue operating with SLR, its price, as well as solar electricity generated through coins, will surely come to more than several increases in price. After all, this coin is made in a way that would allow it to grow simultaneously with additions of solar electricity generated through rewards within the community that uses and supports SLR as their coin of choice, that way promoting cost-effective and environment-friendly usage of electric energy.

We will be updating our subscribers as soon as we know more. For the latest on SLR, sign up below!