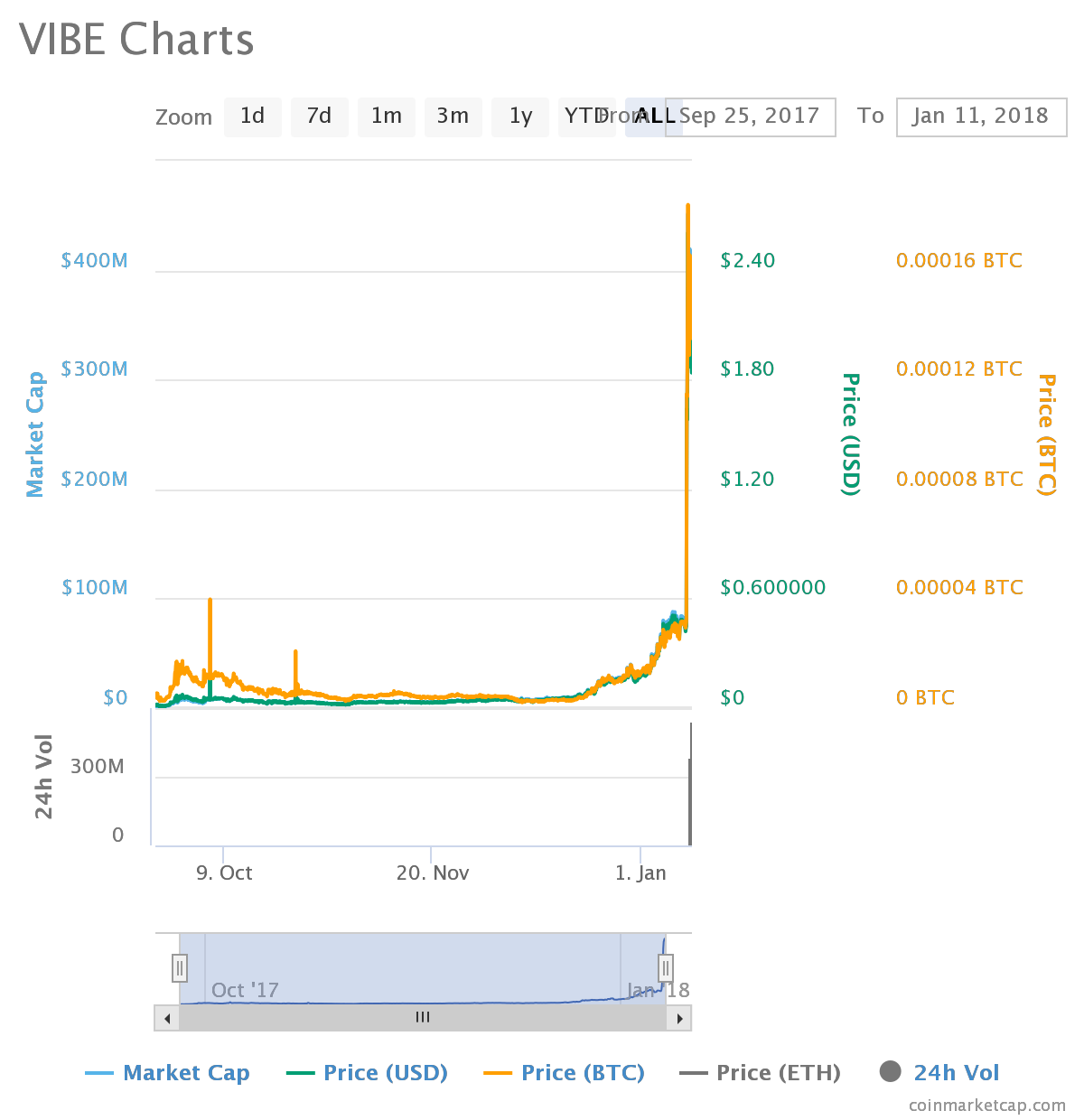 Amidst the frenzied rush in-and-out of Ethereum (ETH) last night, a new coin was added to one of the world’s most frequented exchanges. Vibe (VIBE) appeared on Binance less than 24 hours ago, and its popularity has rapidly increased since. With a volume only rivaled by Tron (TRX) and Ripple (XRP), investors in this fast-growing altcoin are giddy from the anticipation of their digital-wallets expanding with fiat value.

And they may yet be rewarded. After all, the virtual reality (VR) entertainment industry has been heavily hyped by enthusiasts as the way of the future. And it may come faster than any of us expect. The VR world grew leaps and bounds in the past year(s) as the public was introduced to products such as Oculus Rift and Samsung Gear VR. But the appeal hasn’t truly gone global (yet). And the future of this developing technology may be linked to the buy-in of a brand new global market-place.

Enter the Blockchain
The decentralized nature of the Blockchain has ushered in great wealth from institutions and early adopters around the world. The next step in the expansion of the crypto-universe will likely need to come from public buy-in. And it’s already occurring. As the public begins to speculate on the future, courtesy of Binance, et al., they will likely invest in a coin representing a technology they already understand. And if the next tranche of support comes into the market, as I suspect it will in the coming months, VR and VR companies on the blockchain just may solidify themselves as mainstay products.

So Let’s Check it Out
If you’re like me, you don’t jump head-first into a new altcoin just because of an exchange listing. So what makes Vibe (VIBE) different from its blockchain competitors? And what can investor sentiment tell us about the future of this potential gem?

Vibe (VIBE) is the world’s first crypto-based VR marketplace. Providing artists and educators a platform to reach their virtual-audience, Vibe (VIBE) allows content creators to monetize their products using what they dub as ‘volumetric video’ and other virtual assets. While other VR coins have been known to monetize virtual assets, Vibe (VIBE) creates a platform for multiple VR experiences. A one-stop-shop, if you will.

With a pretty hefty collection of partners, including PlayStation (PS4) and Microsoft HoloLens, not to mention the above-listed gear by Oculus and Samsung, we begin to see why investor sentiment has started to gain traction. Having captured their first volumetric performance (in line with their roadmap for Q4, 2017) Vibe (VIBE) is now looking to integrate their off-chain solution to microtransactions before hosting their first live VR performances (utilizing the VIBE currency, of course).

Virtually Guaranteed
Having dropped on a major exchange in the midst of an all-out brawl between investors fighting to secure their gains from the year, month and week before, Vibe (VIBE) surprised us with its resolve, as it looks to weather the storm that (temporarily) hangs over the market. As the clouds part, however, and the Ethereum (ETH) flows once again into our favorite holds, like runoff into our digital storm-drains, Vibe (VIBE) looks a solid choice for long-term gains. Sitting at US $1.80, a bit down from its highs over the past day, it may be ripe for some temporary action as well. The chances of one or the other happening don’t seem too hard to call. And as the crypto space expands its market-cap once again, the chances a number of our favorite altcoins benefit from a global cash-influx isn’t such a gamble. In fact, it’s a virtual guarantee.

We will be updating our subscribers as soon as we know more. For the latest on VIBE, sign up below!

Related Topics:cryptoMicrosoftOculusPlaystationSamsungVibevirtual reality
Up Next

SolarCoin (SLR): Everything You Need To Know