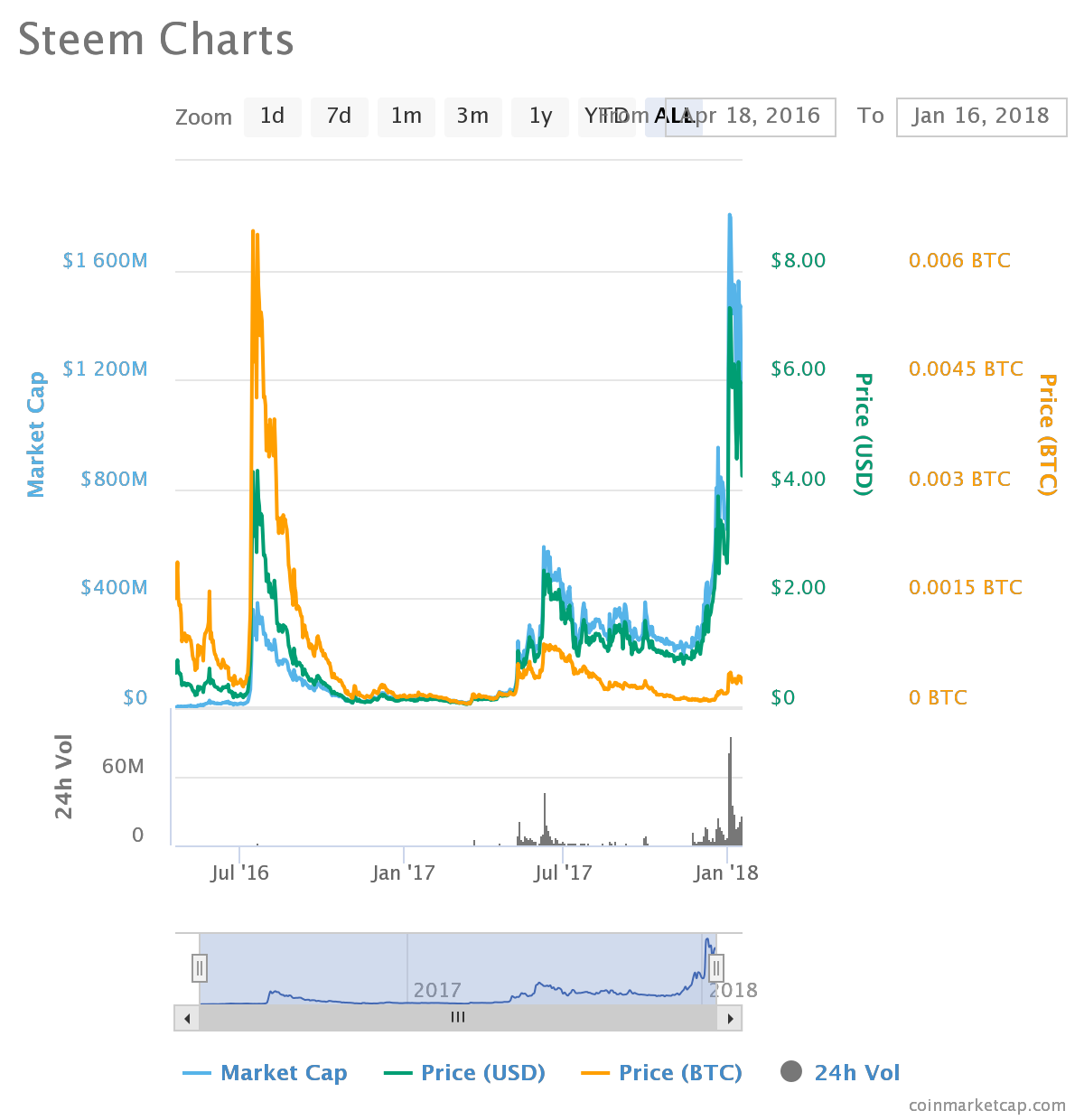 No wonder STEEM is going up steadily, going towards 7$ per coin and gaining on new increases slowly. Although STEEM is a blockchain based coin like the majority of coins, this neat digital currency is rocking with 1.5 billion dollars in market cap thanks to its purpose of monetizing content published on the internet.

How is STEEM working on monetizing content and turning it into $$$ and where does STEEM stand at when it comes to making investments and operating with this coin?

Media and information, given that the internet is the largest and the most visited database ever to exist, can be without any hesitation marked as a form of value that can be monetized. Media, as we all know, regardless of having information being broadcasted on television, internet or ending up in the newspaper, has a massive influence on people, creating targeted audiences and trading with information in exchange for attention – that attention can then turned into a monetary value.

If you think about it, you share content almost every day and even more than a couple of times per day when using Facebook, Twitter, Instagram and similar social networks. Many people are also paid to do so – but what if all people involved in sharing, distribution and commenting would be paid for their contribution to add value to content?

That is how STEEM is focusing on turning shared content across the internet, turned into value. This is without a doubt a fantastic idea given the fact that we rely on Google whenever we are looking for answers – whatever we need to know we can just type it in and see minimum 2.5 million results brought to us in the matter of a second.

Although we find this phenomenon not a phenomenon at all, having all that info available on the fly and at any time is a privilege. In order to show appreciation for content writers and people who are working on distributing and sharing original and useful content, STEEM is monetizing content by giving it value through a network called Steemit.

Steemit launched in 2016 during the beginning of summer with the idea of having community members with accounts on Steemit sharing and distributing content. Steemit thus became a global network for sharing, disseminating and commenting on exciting and engaging content and anyone who would like to join is invited.

The reason for having Steemit created and launched was to give a purpose to STEEM coins and tokens as these digital currencies are being used on Steemit to reward community members who are working on distributing, sharing and commenting in different content. By having the community members involved in these actions, they are earning money in the form of STEEM tokens that can be used for making transactions and purchasing different services and items where purchase with using STEEM tokens is possible.

So, in case you enjoy reading and commenting, or you like writing and sharing original content, Steemit might be just the right thing for you. Steemit is supported by blockchain technology and is powered up by official STEEM tokens. Besides from being able to earn through content and media, you can also make transactions and keep you STEEM coins safe in their official wallet.

Whether you like STEEM for its price or you would like to join Steemit and write your way towards filling up your STEEM wallet, the team behind this coin is undoubtedly proud of their purpose and the way this coin is made to work.

Where is STEEM at Now?

STEEM seems to be doing well even in 2018 as this digital coin has experienced an increase of value raising its price per one coin for almost 11% the last time a change was noticed in the value of this coin. The current price of STEEM coin is 6.19$, going slowly towards having 7$ per one coin and potentially promising that this coin might grow for a couple of hundred percents during the current year.

The total market cap of this digital currency is currently over 1.5 billion dollars with nearly 247 million STEEM tokens in circulation and use. This coin is presently ranked in 35th place on the global coin list and with constant rises in price and value, this coin might even join the top ten list in the future with big guys like Ethereum, LiteCoin, and Bitcoin.

Given the fact that STEEM creators have made an entirely functional social media network named Steemit, that is involved in distributing, sharing and creating original, useful and engaging content, the value of this coin will probably rise. With the rising number of Steemit community members, this is more likely to happen as sharing content and earning money for it has perhaps never been more accessible up until this point.

The purpose of Steemit is to create a massive database of sharable and exciting content while rewarding writers and community members involved in sharing and distributing information by providing them with STEEM coins they could later use for transactions, trading and making exchanges. If STEEM was to continue with walking this path, it could soon become one of the most interesting digital currencies on the market.

We will be updating our subscribers as soon as we know more. For the latest on STEEM, sign up below!

LiteCoin (LTC): All Ups and Downs

IOTA (MIOTA): IOTA and the Economy of Things