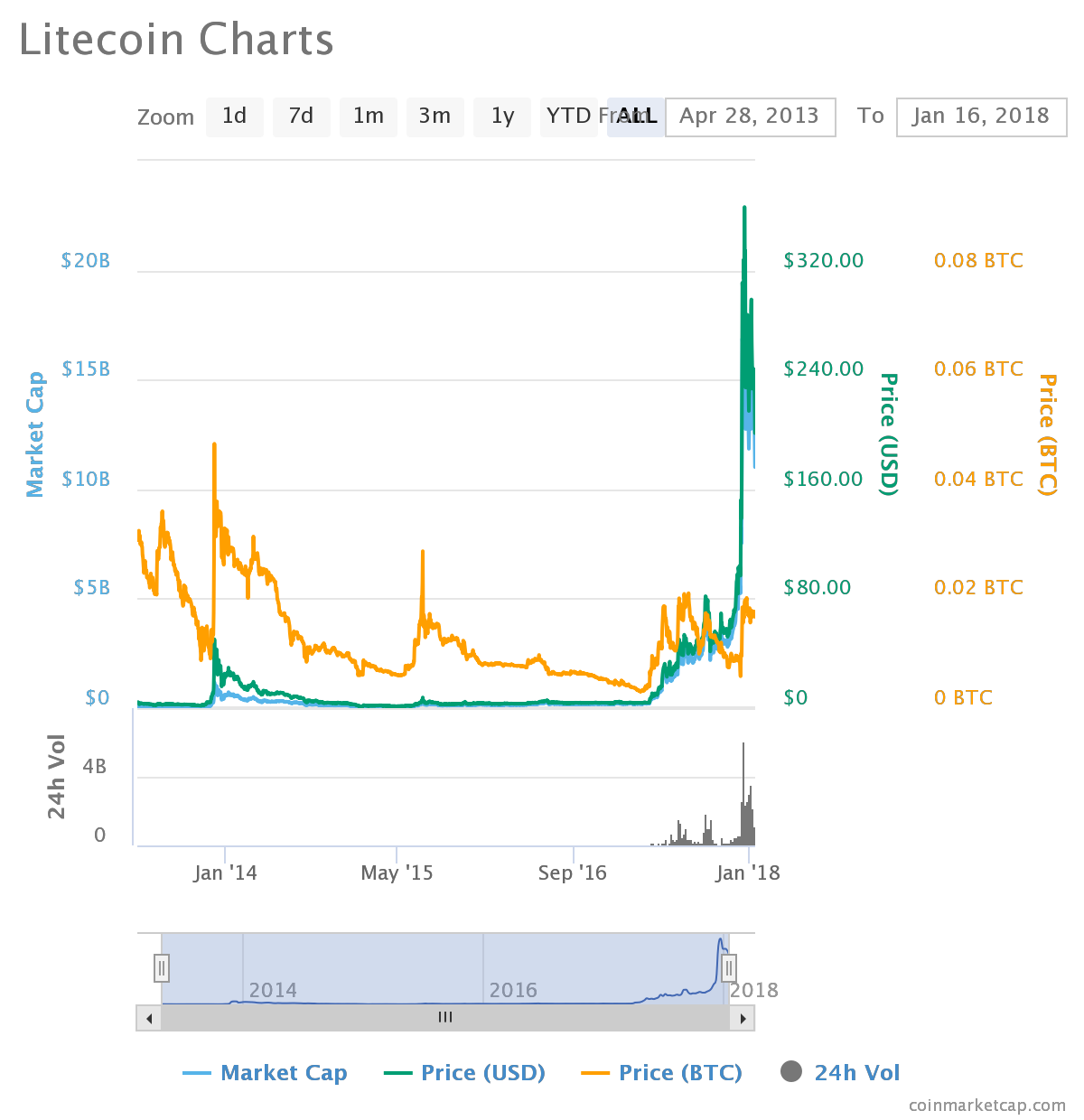 Over 1400 cryptocurrencies launched mostly around 2013 and 2014 when Bitcoin showed first signs of having crypto values categorized as potentially amazing investments. LiteCoin is keeping up with the big guys keeping the 6th place on the global coin ranking list, showing promising results in price, value and market demand for a long time already.

But, although LiteCoin is on the team with the big coins that are valued for hundreds and even thousands of dollars per one coin, this digital currency is still struggling to keep up. If anything, Bitcoin and massive decreases shoulder to shoulder with fascinating increases is a living proof that none of the coins, big or small, are immune to the changes on the market that often results in having cryptocurrency prices decreased.

Where is LiteCoin now after all ups and downs and is it possible to predict where this coin will be at when it comes to its price by the end of 2018?

The highest price LiteCoin has ever had was a result of the early December increase when hundreds of coins were also getting massive increases that sometimes even went up to over 600% of the increased price per one coin. The price per one LiteCoin token was around 325$ by the end of the first week of December 2017, but its price suffered a decrease later on by the end of the same month, leading to a total price of 267$ per one coin.

This was a significant decrease and a pretty cynical surprise for LiteCoin holders and investors. To make things even worse for the state of the price, the value of this digital coin went down at the beginning of 2018 and it wasn’t until the recent change in the market a couple of days ago when LiteCoin experienced a benevolent change in price, leading this coin’s value to 249$ after almost 7% of increase.

As you can conclude by the listed changes, the current price given after the last increase is still lower than the price LiteCoin had during its first significant decrease at the end of 2017.

What you can also conclude based on the price report is that LiteCoin might be having some problems. Why is LiteCoin showing strain and can the problem be traced?

LiteCoin with all the changes in price and value seem like it’s having some troubles as one moment this coin is on the top of the mountain while in the other it is suffering significant decrease showing signs of instability. This means that there is some issue that makes LiteCoin’s price going up and down rapidly and without warning.

Even in the beginning of the first week of 2018, LiteCoin holders and investors regained their faith when this digital coin went to a price of 297$ per one coin which was a real refreshment after the first decrease in December 2017. But later on in the same week, LiteCoin suffered another decrease, leading this coin to 224$ per one coin.

The next week, LiteCoin had another increase that made the price per one coin settle at 263$ per one coin, which further led to yet another decrease no one seems expected, and that is how LiteCoin ended up with the total price of 249$ which is its current price at the end of the second week of January 2018.

The current market cap held by this coin is over 14 billion dollars, but what may seem a bit strange is that around the time this coin was experiencing decreases in price, it was shown that over 2 billion dollars were being traded and exchanged daily. This was the reason this coin had experienced a decrease in price.

We have already mentioned in one of the previous articles that value of a digital coin can easily drop in case there is an increased activity in trading coins. That is how 24h volume reached over 2 billion dollars for LiteCoin, which resulted in having this coin’s value dropping.

Then at the end of the second week of January, LiteCoin broke through the decreases experiencing a rise in price when it was lead to a value of 249$ per one coin. During the rise of the coin’s value, you could easily notice that 24h volume was halved to 1 billion dollars. Even then when the situation seemed to have settled, the regular fee of 0.26$ for trading increased to 0.35$.

The raised fees are not doing any good for LTC reputation as increasing fees means that you are constraining decentralized community that is of now probably growing smaller  – many other crypto values are offering far cheaper fees for transactions and many are still focused on providing users with a no-fee policy which is a pretty tempting offer.

If LiteCoin developers don’t come up with a solution, many investors might turn their backs on LiteCoin for good.

We will be updating our subscribers as soon as we know more. For the latest on MIOTA, sign up below!

NEO: Everything You Need To Know About China’s Largest Coin