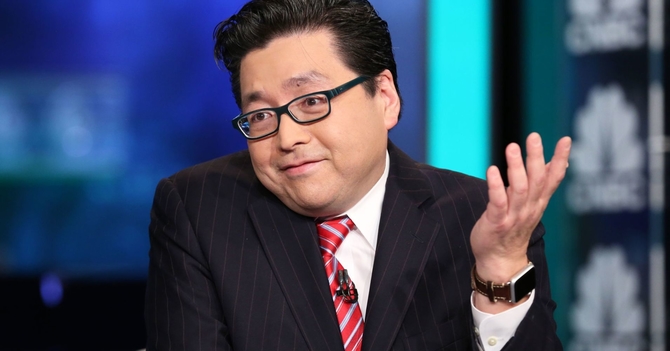 Tom Lee is a cryptocurrency expert at Fundstrat Global Advisors. He’s made name for himself by correctly predicting all kinds of markets many times over. Earlier this year, Mr. Lee made waves in the cryptosphere when he forecasted Bitcoin’s price to end the year at $25,000.

Not too long ago, Mr. Lee appeared at CNBC’s “Squawk Box” to talk about Bitcoin and other crypto topics and if you missed it, in this article we will give you the gist of it.

The interview opened asking Mr. Lee about Bitcoin. That was unavoidable in the coin’s currently calamitous state and the hash wars with Bitcoin Cash. While the red numbers in the market seem apocalyptic to many, Mr. Lee explained that the outlook is not as bad for several reasons. First of all, Bitcoin is currently more of a commodity than an actual currency, so tragedy will hardly come up of the current low market.

He also explained that crypto has two main players: users and speculators and that users will ultimately dominate the market because there is a new wave of users coming soon in the form of institutions. New regulatory clarity will give institutional investors and users the confidence they’ve lacked so far to adopt Bitcoin (and many other digital assets), come into the game and make the market mature at last.

The interviewer asked Mr. Lee explicitly about Bitcoin’s price by the end of the year, because the current trends make the $25,000 mark seemingly unreachable. Mr. Lee agreed that it doesn’t look so hot right now but he still said that $15,000 by year’s end is reasonable. When he was asked why he said that many different things could make this happen. He wasn’t specific about what could those things be, but he was very confident nevertheless.

He also explained that Bitcoin is currently seriously undervalued. In his estimation it takes $7,000 USD to mine a full coin so, being a commodity, it won’t stay under that price for much longer because commodities are never sold at prices that are under production costs. On further explanations, he said that as the world grows more digital every day, digital currencies can only become more relevant and accessible. That will make adoption easier, more common, and will rise value for the market.

When the interviewers insisted on describing the sorry state in the cryptosphere, Mr. Lee explained that it’s not as bad as it looks. XRP, for instance, is doing quite well and is quickly becoming a viable alternative for Bitcoin.

To take his point further, he compared how much money is moved around the world using Bitcoin and Paypal. Bitcoin’s piece of that market is superior by a factor of three, even as the price goes down. In his estimation, it will be six times bigger than Paypal in two years, more or less.

Next, he described resistance to digital assets as a normal feature of the generational gap.

During the interview, Mr. Lee was pressed to be a prophet of doom of sorts, but he never lost his ground. Not just around Bitcoin, his arguments on every point were rational, calmed and he offered data when it was needed.

Blockchain-based Human Resource Bank to Be Launched by Humans.net to Allow Over 200,000 Users Find Help and Job