The global focus on climate change has shifted dramatically over the last two decades. The industrial growth of corporations and technological advancements in transportation has caused the world’s consumption of fossil fuels to expand exponentially. The burning of fossil fuels releases Carbon Dioxide (CO2) into the atmosphere, which causes adverse effects on the global ecosystem. The graph below shows CO2 levels during the last three glacial cycles, taken from ice cores. It shows global distribution and variation of the carbon dioxide present in parts per million (ppm). This graph is a poignant reminder of how far we are pushing the limits of the world we live in. Today, we are currently at a level of 408 ppm. Which is 36% higher than the highest levels recorded, over the last 400,000 years. 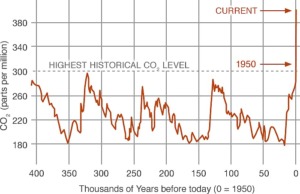 The overall consensus revolving around the topic is a nonchalant perception. Until an issue begins to directly affect an individual then most people are happy to take a backseat ride. To put on their blinkers, bury their head in the sand and generally hope that the problem will resolve itself. The Earth is protected by a thin Ozone layer which allows it to be unique and sustain life. We often take the basic gifts in life for granted and our planet is definitely one of them. Because of the actions we do or don’t take in this present, we can dramatically affect the lives of our families for generations.

An ambitious new project is taking major steps to reduce our global footprint. 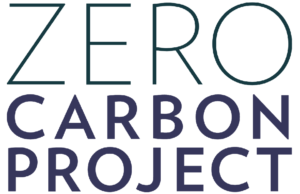 The Zero Carbon Project is an energy marketplace which utilizes blockchain technology and international carbon credits to tackle climate change. A carbon credit is essentially a tradable certificate which provides strict regulation over how much CO2 can be released into the atmosphere. The international carbon credits are used to offset carbon emissions and provide consumers access to cheaper energy contracts. This encourages a diverse range of suppliers to enter the market with their best zero carbon energy prices, tailored specifically to the consumer’s metrics.

The Zero Carbon Project is a climate change initiative created by the Beond Group, an award-winning energy consultancy which has been in operation for 15 years in London. Their team is made of 30 energy market professionals who are passionate about tackling global climate change, through the application of new technologies. Beond services over 600 energy consumers in the UK including Knight Frank, Capita, The Salvation Army and Salford County Council, and has received eight awards over the last three years covering innovation, green business, and consultancy services.

Private pre-sale – Begins May 1st and will run up until a week prior to the commencement of the public pre-sale or until 28,000,000 NRG tokens are sold.

Public pre-sale – Dates to be announced

A link to the Zero Carbon Project whitepaper

Where to participate in the Zero Carbon Project ICO

$PAC – The “Socially Active” Crypto Project that Rises Like a Phoenix