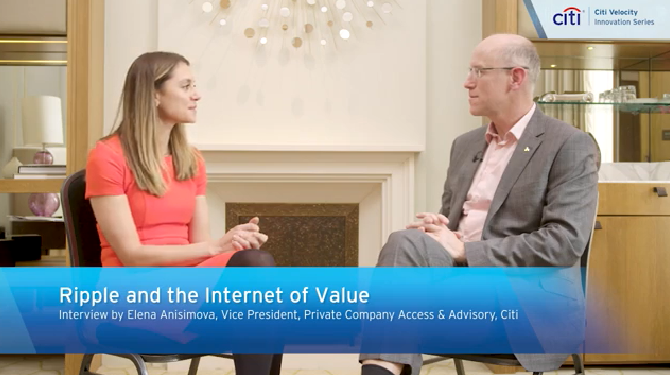 In today’s world, technology and intense rivalries play a vital role in the invention of new things that are refining the way digital money move from place to place. However, growing customers’ expectations and anticipations are also changing the outlook of digital commerce today. That’s exactly what Ripple has been doing lately (causing headache to the competitors).

Nonetheless, one question happens to come to the mind and that is, which of the financial transactions – be it cross-border transactions, government and customers’ disbursements – have the greatest possibility to be digitized? This has been one of the key points of the recent Citi Digital Money Symposium organized by Citi Bank.

It is important to know that banks of the future were also discussed and if the global financial world needs banks or just banking services. During the course of the Digital Money Symposium, Marcus Treacher, Ripple’s Global Head of Strategic Accounts, was interviewed by Elena Anisimova, the VP, Private Company Access & Advisory at Citi Bank.

As we know, Ripple is a digital asset and a real-time cross settlement platform created on an open-source internet protocol. Also, Ripple enables fast and secured cross-border remittances, which are almost free. However, Treacher also purports the fact that Ripple is making sure money transfer is changed. During the interview, he said:

“What we (Ripple) are trying to do is to re-work how banks move value between each other and we always work with banks. We have a strong partnership with the largest banks in the world which we are using to work with us to really build-out our solution to benefit the banks and Ripple.”

With that in mind, banks are more concerned about blockchain than cryptocurrency itself, and Ripple’s Treacher had this to say during the interview:

“Banks are focused on blockchain because that’s where the increase of the value that can be provided for their end customers in terms of efficiency, speed, accuracy, and awareness. It all kicks in using blockchain technology and in Ripple’s case, its net of value version of that creates a significant value of proposition for their customers worldwide.”

Strategic Accounts Global Head of Ripple further went on to say that,

“The digital asset element really comes into play in the financial services contacts for managing liquidity and flows between different value stores in different fiat currencies. What I mean to say is that, if you are moving Dollars to Euro, both currencies are very high liquid currencies and can move very quickly.”

“So there are two levels of value, one is the immediate payment, which is the blockchain value. While the second is the delivery of liquidity, which is really where we see one of the major value of propositions for the digital asset in the future.”

The creator and CEO of a cryptocurrency/decentralised project TRON, Justin Sun, has finally managed to meet with Warren Buffett over a charity lunch. The billionaire and chairman of Berkshire Hathaway has been in constant negotiations with Sun over a possible lunch but the two executives were constantly busy, which has resulted in numerous postponements.

According to Cointelegraph, the two of them decided to meet on January 23 in Nebraska. They were attending a private country club there, but it seems that they weren’t the only ones who made it to the gathering. Some of the other guests who joined Sun and Buffett were Charlie Lee, the founder of Litecoin Foundation, Chris Lee, the CFO of Huobi, Helen Hai, the head of Binance Charity Foundation, and Yoni Assia, the CEO of eToro.

Sun was rather excited about the event, claiming that it was ‘really an honor’ to meet Warren Buffett in person. Moreover, Sun stated that he was grateful for Buffett’s vision, wisdom, and dinner. Finally, he said he would always remember pieces of advice Buffett provided him with when it comes to making a better ecosystem for Tron and doing business with partners in the world of blockchain.

Why Was This Luncheon Organised in the First Place?

Those who are not from the crypto…

Although the idea of using cryptocurrencies and incorporating them into the modern world is not that new anymore, some people still don’t have a clue about the many options cryptocurrencies offer. The majority of people probably know about Bitcoin, but there are many other cryptos that have evolved in recent years. One of them is TRON, founded in 2017 by Justin Sun, who managed to make it quite famous in one year’s time.

If you are only getting started with Tron, you probably don’t know much about this promising cryptocurrency. That’s why we have done some digging for you and found all the predictions for TRON in 2020.

In this text, we will list all the facts brought up by cryptocurrency experts, so that you can see for yourself if TRON is something you would like to invest in.

Let’s start with the positive aspects of TRON. There are several good things that indicate how successful this cryptocurrency could be in the future, as well as how much its users could benefit from it.

As mentioned before, TRON was founded by Justin Sun, one of the most talented young people who got listed in the Forbes ‘30 Under 30’ section. Continue Reading

It is considered that the best place to buy cryptocurrencies exchanges. But this is a mistake. Let’s think about why we don’t buy fiat currencies on stock and currency exchanges or on the interbank market. Because it takes a lot of time, you need to have quite large amounts, and trading licenses are also a problem.

The situation is similar in the cryptocurrency market. Exchanges require a lengthy KYC verification process. the process of withdrawing funds through a merchant can take up to 5 banking days. It should also be remembered that before withdrawing funds, you must conduct trading operations.

What are the advantages of the brokerage service 365Cash.co?

You don’t need to go through a lengthy KYC verification process. This is a crucial aspect for those who worry about their anonymity.

Low limits and fast execution of the exchange order. If you need a small amount quickly – 365Cash.co is the best choice.

The ability to use payment systems like Perfect Money, Payeer, AdvCash to buy cryptocurrencies at the market rate. Exchanges do not provide this opportunity.

Low commission. We do not charge customers a fixed fee for the exchange. We work at the market rate and are completely dependent on the spread.