The Internet of Things (IoT) is one of the most promising technologies, along with the distributed ledger technology (DLT) – also called blockchain, artificial intelligence, and a few others. ANAPP Blockchain Technologies Limited, a blockchain-oriented startup, plans to merge IoT with blockchain for an innovative infrastructure that would allow users to mine digital currencies with the help of any electronic device and home appliance that can act as an IoT device.

IOTW, as the new project is called, will use blockchain to provide a better alternative to the popular Proof of Work (PoW) and Proof of Stake (PoS) consensus algorithms. IOTW proposes Proof of Assignment (PoA) – a completely new approach that solves some of the main problems inherent in the traditional algorithms. The ecosystem is fueled by IOTW coins, which allow high-speed micro-transactions.

Some may find IOTW quite similar with IOTA, a popular project that combines a distributed ledger system with the IoT concept. However, IOTA doesn’t use an actual blockchain system but an architecture called Tangle, and more importantly, it doesn’t perform as well as IOTW.

Bitcoin is by far the most popular and oldest cryptocurrency, and today most of the miners would target it given its high price. However, the competition became fierce and retail miners don’t find it profitable to generate new Bitcoins, which has led to the formation of a monopoly where companies like Bitmain are dominating the market. Besides, the PoW algorithm used to mine BTC requires much electricity, which has negative consequences for the environment, especially when the electricity comes from coal-based power stations.

IOTW proposes a new approach to mining. The Proof of Assignment (PoA) algorithm requires less computational power and less memory capacity compared to PoS and especially PoW. With the new method, those who have more IoT devices connected to the IOTW ecosystem have the chance for higher profits. Thus, typical home appliances can generate IOTW coins without significantly impacting the electricity bill. You can think about it as micro-mining, as it doesn’t require advanced processors like those found in the ASIC devices. However, the potential profit is worthy of consideration. IOTW blockchain solution will be open-SDK so that any IoT and connected device can download their app to join the ecosystem and start mining. However, the devices don’t have to download the whole blockchain to become eligible nodes, so no significant memory capacity is required. 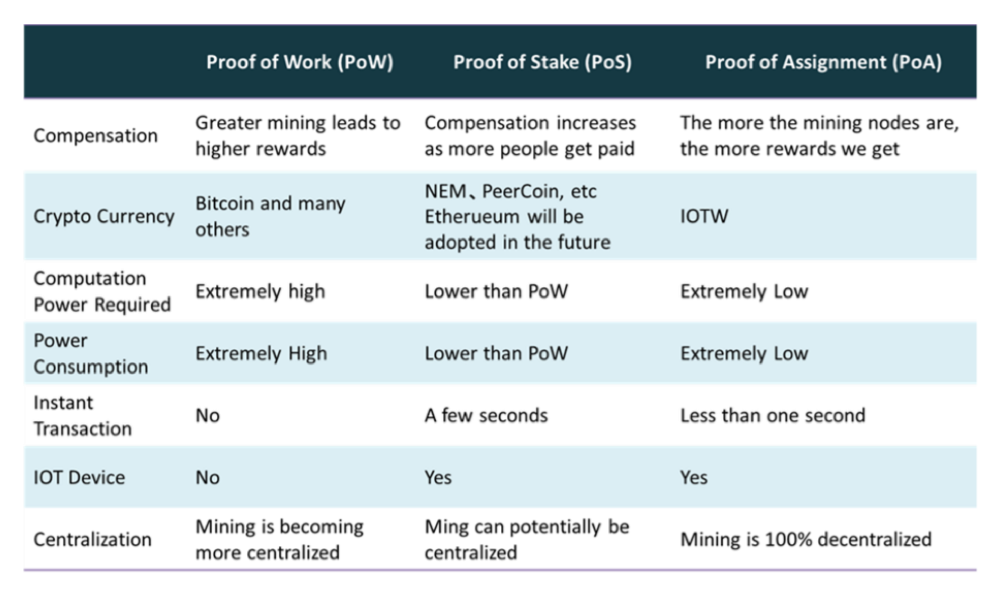 If a mining equipment unit to generate new Bitcoins can cost you over $2,000, then IOTW lets any IoT device become a miner. Besides, the system allows typical electrical devices become suitable for the IOTW ecosystem by integrating a special DPS chip that replaces their traditional analog power systems. This procedure would convert the appliances into IoT devices that might be used for mining.

The system proposed by IOTW has some clear benefits over the mining approaches used by Bitcoin and Ethereum. Some of the advantages are as follows:

The IOTW team will work to promote the project and make the coin be accepted for as many business cases as possible. The team will have to partner with goods and services providers to make the IOTW token work as a payment method. Besides, the ecosystem will be used to collect and sell data for device owners, which will represent another use case for the token. Last but not least, IOTW coins can be conveniently used for peer-to-peer transactions between members.

The IOTW project is at its nascent stage, but it definitely has a great potential for the future. The ecosystem, which is backed by an expert team, can literally reach millions of users around the world by allowing their home applications to generate profits through the new concept of micro-mining. The blockchain community would rapidly adopt IOTW given that it addresses some of the key issues that are characteristic for the PoW and PoS algorithms.

As of July 31, 2018, the IOTW project has raised about $4.14 million, and the testing version of its system hosts over 200 micro-mining IoT devices. The token sale is still continuing, so potential investors are free to apply to join the whitelist.

NEM (NEM) or Ripple (XRP), which cryptocurrency is the best bet right now?