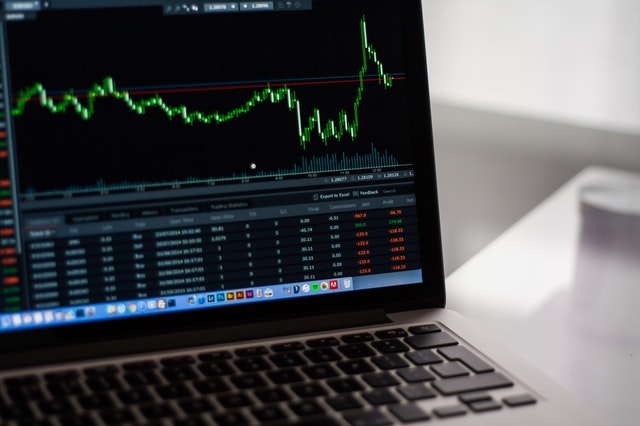 The entire cryptocurrency sphere is once again finding itself under selling pressure with the landscape littered a sea of red in today’s session as well as resuming its primary trend lower. While the space had found some relief in the past week or so and managed to stem the bleed, at least temporarily, it appears as though sellers have once again reasserted themselves and are now in the process of taking control of the action once again.

Although we managed to spot a nice entry and subsequent 80% + run this past week with DGB, and hope that many of our readers participated, such set-ups remain far-and-few between with risk management remaining paramount in a very difficult tape within the larger confines of and ongoing bear market that has persisted now since late December- early January.

While we’ve spent considerable time and effort with regards to the short-term movements of numerous names over the course of the past several months, particularly with an emphasis on the action surrounding the 20 – day moving average seeking evidence/clues with regards to direction, we want to expand our horizons and time-frame in this piece as we feel it is imperative to garner as much information as possible in attempting to get a ‘Big Picture’ view of what is and may be transpiring.

With that said, let’s take a look at the Weekly charts of both LiteCoin (LTC) as well as XRP to see what the intermediate-term action may be foretelling. 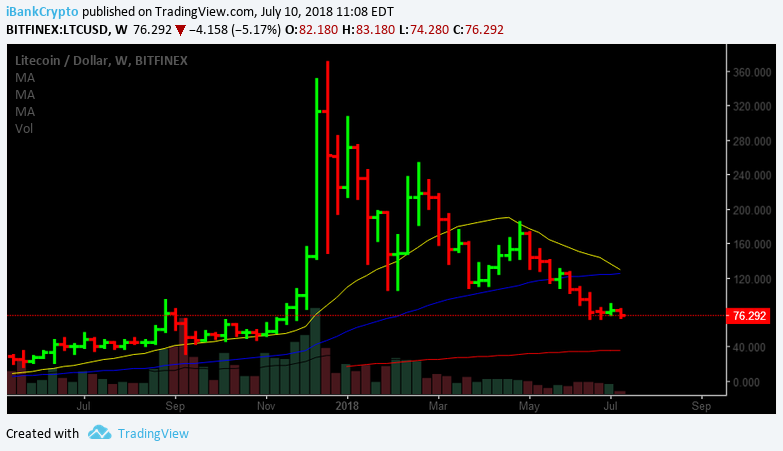 As we can observe from the weekly chart above, LTC finds itself trading below both its four week (yellow line) as well as its ten week (blue line) SMA’s. In addition,we can also observe that the 4WK moving average is nearing a potential cross of its 10WK and should such downside cross materialize in the days/weeks ahead, both investors/traders may want to take notice as such would likely suggest additional selling pressure may ensue.

Furthermore, LTC appears to be building-out a potential bear flag pattern (on the Daily Time-frame) and should such pattern resolve to the downside, we could be looking at a significant move lower in the not too distant future.

Thus, moving forward, both investors/traders may want to utilize the following levels as a guide as well as providing further clues/evidence with respect to direction.

If at any time in the days/weeks ahead, LTC violates the 70 level and is unable to recapture/recover that figure within a 48-hour period, such would likely suggest that lower levels are in play where we could envision a potential move into the 5 handle (50’S) zone down the road.

However, if LTC is capable of holding the line at the 70 level and more importantly, capable of moving topside of the 82 as well as the 87 and then 90 levels, such development/s, should they occur, would more than likely suggest that the worst is behind and in the rear-view mirror.

Nevertheless, although LTC has not broken down completely thus far, it certainly finds itself in a vulnerable posture requiring close attention moving forward. 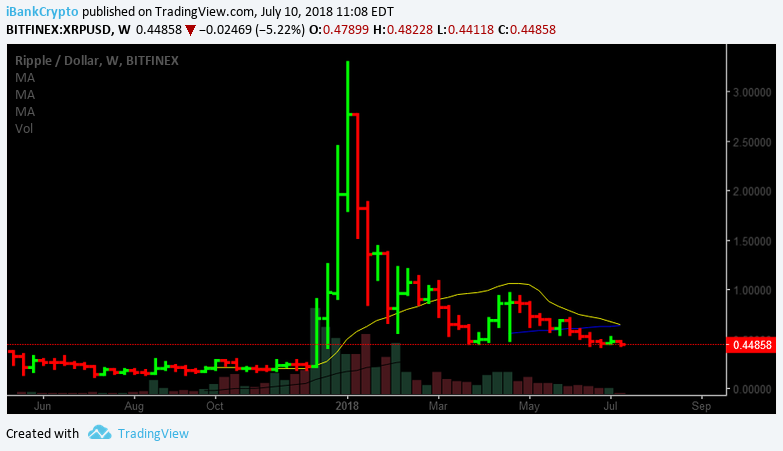 Much like LTC, Ripple finds itself in a similar technical position on the weekly time-frame with XRP trading below both its 4WK and 10WK moving averages. Also, we can see that the 4WK is moving lower towards its 10WK and appears that we may witness a cross to the downside in the days/weeks ahead. Much the same as we noted with LTC above.

Furthermore, XRP is also building-out a potential bear flag (on the Daily Time-Frame) and should it resolve to the downside, such would likely suggest lower prices ahead.

Thus, both investors/traders may want to monitor the following levels for further evidence/clues with respect to direction moving forward.

If, at any time in the days/weeks ahead, XRP should violate the .42 level and is unable to recapture the figure within a 48Hr time period, such development, should it occur, would likely suggest that a move into the .20-.30 zone would be ‘In Play’.

However, if XRP can turn the tide and go topside of the .50 as well as the .55 levels, such action would be a positive and perhaps stave-off the potential for much lower levels, for now.

Nonetheless, while neither LTC nor XRP has violated critical potential intermediate-term support thus far, both remain in a vulnerable technical posture, both Daily and Weekly, whereby investors/traders would be wise in continuing to monitor the action with a close eye moving forward.

Here Is Why Ripple Separating itself from XRP, the Coin, is a Good Thing