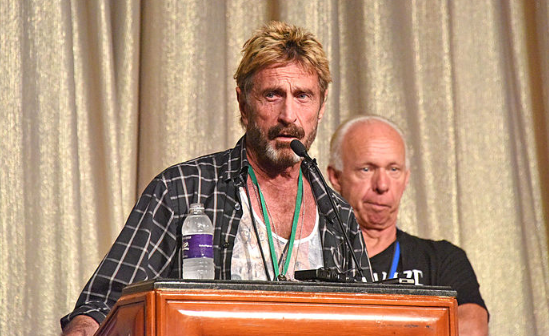 One of the particularities of the crypto sphere is that in many cases it is moved by the opinions of experts of the industry, people that generally are associated with the finance world and have a strong influence in the community. The views of these figures in several occasions lead to a reaction of the cryptocurrency users, which at large end up either favoring or causing harm to a particular coin.

In this matter, one of that figure without a doubt is John McAfee, the businessman behind the McAfee company, an organization providing cybersecurity solutions for the industry since 1987. Mr. McAfee is not affiliated to the McAfee antivirus by any means now, though.

John is characterized being an active influencer in the crypto world, who even widely benefits specific coins in the industry by just commenting his thoughts on them over his Twitter account. There are speculations that McAfee has managed to make changes in the industry of more than 100,000 USD, the fact that proofs how influential he is for the crypto world.

In this sense, it all seems to the point that Mr. McAfee is not planning to change its presence in the virtual coin market, in fact, he recently gave declarations on his Twitter account stating that in 26 (24 now) days the sector would see the launch of his coin.

It’s predicted this coin would be actually printed so that it will be a physical asset in the form of fiat but backed in crypto. Let’s see how it goes!

A couple of ago McAfee published on his Twitter account the first clues on what it will be the coin he will launch in 26 (again, that means 24 now) days. Although he didn’t share that much of a detail, he said,

No hoax. The "McAfee Redemption Unit" is real and coming in 26 days. The graphic is low res – don't want to give much away yet. Printed on currency paper, holographs on both sides, serialized, linked to the blockchain, redeemable, convertible, collectiblehttps://t.co/ySUwkDuW7s pic.twitter.com/75xTje39X8

Even with the short description, McAfee accomplished to seek our attention already, and the truth is several expectations are now put on the project. Counting on his influence in the industry we cannot be less than sure this will be an important invention for the crypto sector.

Just recently, McAfee sent out another Tweet in which he gave an interview to Crypto-News.in to explain a little further how will the coin work, but he specified that the community would have to wait until the 25th of June to get all the details of the project.

The initial idea how McAfee Coin is going to work

Patience. You will see. You're just glimpsing a shadow of a shadow of what I'm doing. Young people!????

In an exclusive interview to the Crypto-News.in, the 72-year-old businessman said,

“A coin identifier or list of coin identifiers is distributed with the note as a separate, collectible document – a paper wallet. It is expected that this paper wallet will be then stored in a different location from the note. None of the coins are initially “activated” however.”

“Coins become activated if and when a note holder chooses to “convert” his or her Fiat note through a process of reverting the note(s), through the mail or other means, to the MRU Foundation – the organization responsible for archiving and caring for the physical notes. There may be a processing fee for conversion.”

With this, we have a clear perspective that John McAfee is very committed to the crypto industry and its development.

In fact, not so long ago, McAfee, the crypto dad (yes, that’s how people call him now), tweeted a video in which he notes his message regarding the war between banks and cryptos.

The looming war on the horizon. pic.twitter.com/j86e2xEXP8

As per the tweet, he called on the community to require banks the possibility to buy cryptos using their platforms; the fact that he suggested should come along with a threat of switching to other banks on the contrary case.

As McAfee himself published, we will all have to wait until next June 25th to get the final details, but for this moment the project looks bright and exciting. If it all goes as expected this will be another success for the nick-named crypto dad. So stay tuned!

Tron (TRX): Holders will reach the top of the mountain of success soon