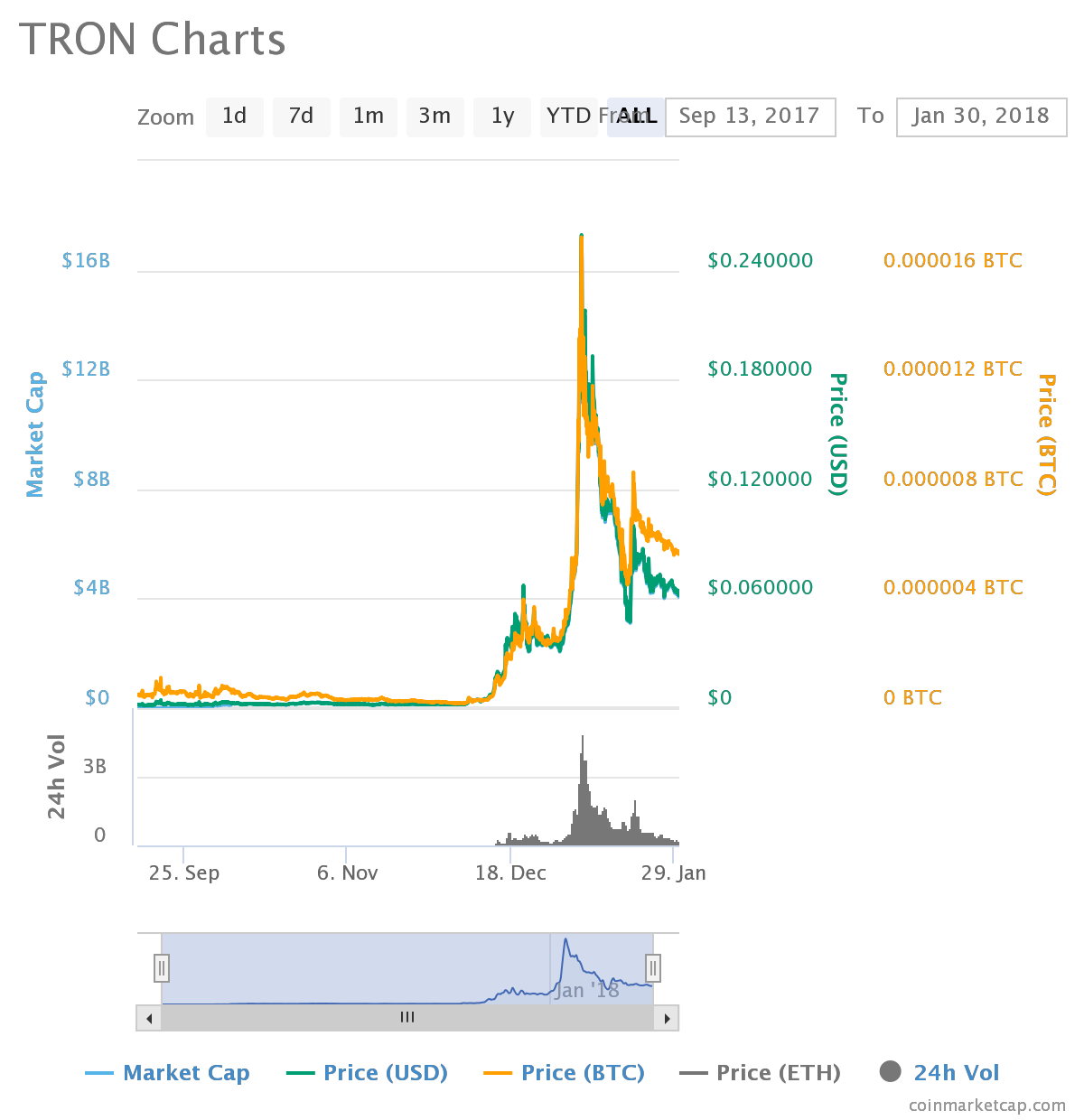 Tron (TRX), a coin still available for under a dollar, seems to be working on getting new opportunities and implementing some novelties to improve their ratings. As this coin is slowly progressing, we can quickly conclude that all innovations are closely related to newly acquired partnerships towards obtaining a status of a mainstream coin. How is TRON doing in 2018 and what is set for this coin in the upcoming months?

A couple of words about TRON

In case you haven’t heard of TRON, although this coin has been on the market for a while, this digital currency is focused on content and promoting content. Its platform works based on rewarding all members that are involved with sharing, owning, creating or commenting on the already published material. That way, all members of TRX community can contribute to the decentralized system running on blockchain technology and get awarded for their contributions. The rewards are given in the form of TRX tokens that are being rewarded by the involvement of all members working on promoting digital content.

At the same time, Tron is working on creating a massive decentralized database that will be functioning in favor of quickly accessing any published content with the ability to promote, share and comment on any public material. Think of it like of digitalized Wikipedia – a massive base of differently categorized information and assets. The only difference between the two would be that TRON is running on thousands of different computers all connected through a decentralized blockchain system.

2017 was a great year for almost any cryptocurrency out there as many of the coins have managed to get their 5 minutes of fame with amazingly high increases in price and with fast game-changing coins that led to increasing the selling volume for over 600% in only a couple of months. Tron was also one of those coins that were slowly getting on its popularity thanks to the cleverly designed ecosystem that rewards involvement with creating and distributing content.

By promoting content, they have managed to attract many different investors that soon began to trade with TRON, also enjoying benefits of the rewarding program where you can earn by getting involved with creating and sharing content.

Over that time, Tron has managed to come a long way from having a soft price to having a decent value of 0.06$ per one unit, growing in a continuous pace with minor but valuable increases in price. So, this coin seemed to be a promising coin to hold onto in the upcoming 2018. Now when the first month of 2018 is slowly coming to an end, we see that predictions for TRON in 2018 were very realistic.

Although TRX has suffered a minor decrease in price in the past 24 hours at the time of this writing, this digital coin is still circulating the market with a promising connotation.

Apparently, besides from having been announced that TRON has entered a partnership with Global Social Chain, this coin has also announced the release of First Beta Version Exodus that should occur around March 2018. This means that TRON could potentially bring new investors and new holders to the table in case everything goes well with the project they are launching in March of the current year.

AS far as the joining with GSC concerned, this partnership will allow TRON to get back on the track with the price, as this coin became the coin with most massive Daap user base in the world. The beginning of January was especially benevolent for TRON as this coin managed to reach the price of 0.23$ per one unit and to get closer to the one dollar mark, but then the tables turned, and this coin suffered a major loss in the volume of the price. It fell to 0.05$ from the price mentioned above, that way suffering from massive losses in the total market cap.

The main catch with TRON however, seems to be the devotion of TRX users, holders, and community members, along with their trust in this digital currency. In the last couple of days, TRON has experienced an increase, followed by an immediate decrease of -2% which led to a current price of 0.06$ per one coin.

TRON is all about having a robust decentralized community running on blockchain technology that would enable secure functioning in an open-source protocol. This community would also allow all users to contribute to the ecosystem, with having the opportunity to perform smooth and straightforward transactions and exchange of content. TRON is made to represent this exact model, so in the spirit of working in favor of upgrading their system to match even higher standards, TRON developers are launching Beta Version Exodus.

Beta Version Exodus will be launched on 31st March 2018 and should be the next significant upgrade to the TRON network after starting their open-source ecosystem. Given that TRON platform is targeting the trillion dollar entertainment industry, if all goes well with Exodus, we can freely expect to see this coin’s price hitting the moon.

We will be updating our subscribers as soon as we know more. For the latest on,  sign up below!

Related Topics:digital coinexodusTronTRX
Up Next

MeshBox Is Trying To Connect 3.5 Billion People To The Internet