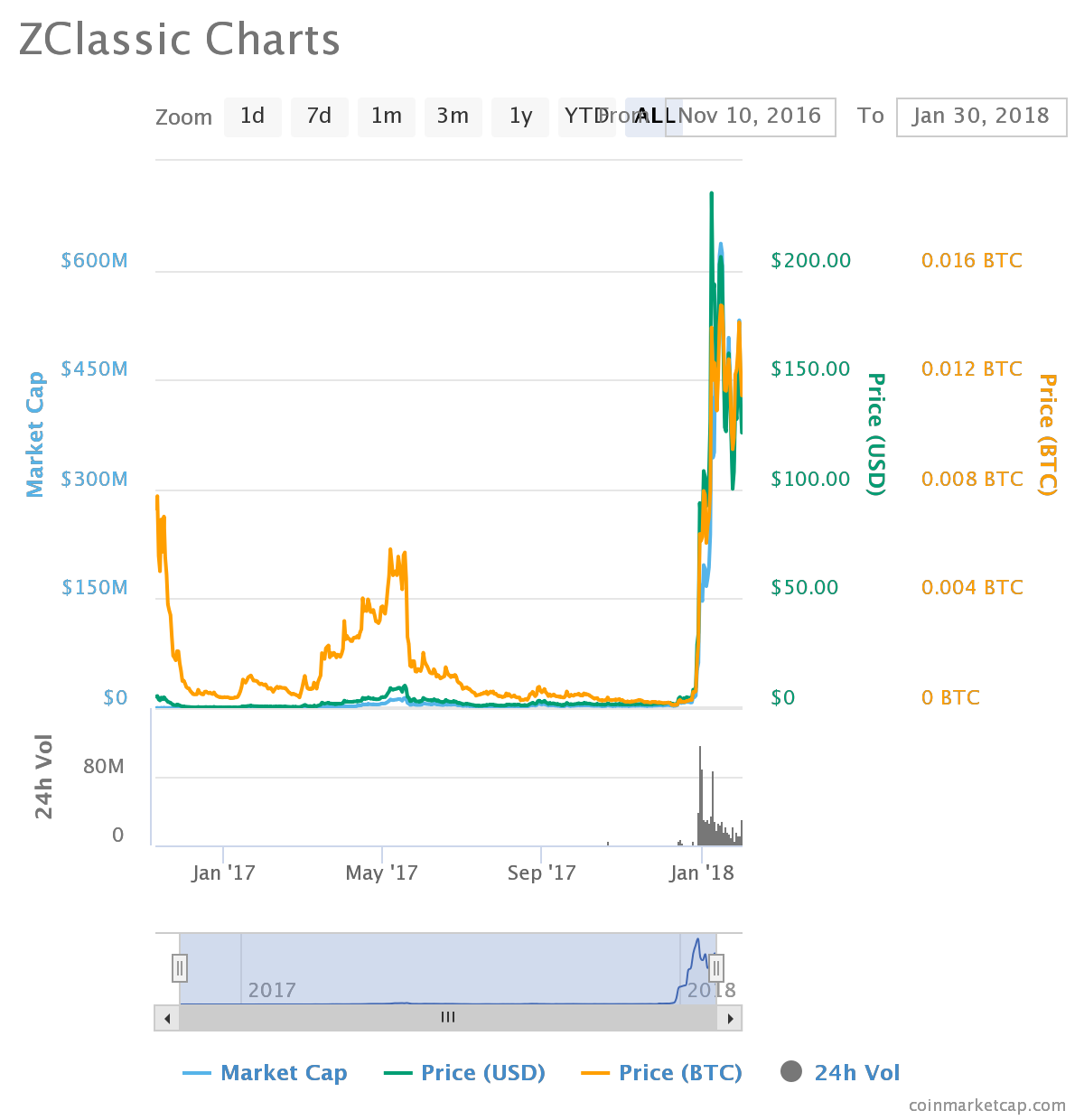 The last couple of days were thrilling for ZClassic (ZCL) holders and investors, but not at all times positively exciting. ZCL often showed changes in the volume of selling as well as in the price, starting with changes from January 21st, 2018, still leaving everyone wondering what will happen next.

Trading at its all-time high just a couple of days ago, from that moment things got pretty turbulent for this cryptocurrency as it had its price going up and down day by day, keeping everyone expecting and even cautious. Another thing collecting the general interest of holders and investors is the case of Hard Fork. When will ZCL get its fork and will this currency come to a safe point with continuous increases in price?

When talking about ZClassic, the best currency to be compared to would surely be ZCash. In case you have heard of ZCash, you surely know that these two cryptocurrencies are closely related. So, to explain what ZClassic is, we first need to follow up with a couple of facts that describe ZCash.

ZCash is thought to be one of the most significant currencies on the market. It is even believed that this digital coin will also replace Bitcoin very soon. ZCash is created in a way that would make you think that its creators wanted to address everything that wasn’t quite right with the original cryptocurrency – Bitcoin.

So, unlike Bitcoin, ZCash is covering all issues regarding general privacy when it comes to tracking transactions. ZCash is programmed in a way to represent a decentralized community where fast and cheap transactions are enabled, but unlike with Bitcoin, the amount of each transaction, the recipient’s address and all information about the sender remain private and kept on its own blockchain. That way, ZCash managed to solve what they thought was the biggest issue regarding the privacy during and after the process of completing transactions by using blockchain.

ZCash thus managed to earn its place on the global coin ranking list, fair and square, also acquiring a stable pace of increases in price, which led this coin to a fabulous price of 472.58$ per one unit.

Now, you are probably wondering (in case you don’t already know), what ZCash has to do with ZClassic? Well, ZClassic is an implemented value existing simultaneously with ZCash on ZCash’s blockchain.

What is interesting about ZClassic is that from the moment of its launching, this coin didn’t have a “soft start” like other coins do – meaning that every coin when released and launched must go a long way until it gets the opportunity to hold any value. The market is always dictating that price.

But, with ZClassic, this just wasn’t the case at the beginning when this coin was first launched. So, instead of having ZClassic starting from a soft price, dealing anywhere from 0.000001 to 0.1$ which is the usual case, ZClassic started with an imaginary price that wasn’t even roughly determined. That way you had a chaos on the market where some people were buying 1 ZClassic at the price of 3000 BTC, which is a ridiculously high price for a new coin.

The only difference between a regular new coin and ZClassic was the fact that ZClassic had a history of being related to ZCash – a coin that was doing pretty well as at that time, just as it is doing great at the moment of this writing.

Although ZCASH and ZClassic story is a whole different story from the story about Ethereum and Ethereum classic, most people were still cautious, and some still are, when it comes to buying and investing in ZClassic.

ZClassic and ZCash are working together, simultaneously solving the problem of privacy during and after transactions and complementing one another. Developers even use ZClassic to improve ZCash, following up with bugs and potential issues and working on fixing everything. That way, a large community of people with the same goal is working together to create a decentralized ecosystem, ZClassic, that peacefully coexists with ZCash, somewhat its patron network and the original Z-coin.

But, what makes most holders make up their mind for ZCL over ZCash, especially miners, is the fact that ZClassic doesn’t take 20% from the miners. The miners involved in mining this currency, get all they can mine and keep their rewarding chains.

The case where ZCL came down from its all-time high of over 50% in only a matter of a week, might have something to do with the long-awaited hard fork. In case you are not familiar with this term, Hard Fork represents a complete renewal of the blockchain system and protocol that affects nodes into making transactions valid if previously invalid.

This occasion also goes vice versa. Hard Fork then represents a radical change within a protocol of blockchain technology where all users must upgrade to the latest software to be able to still participate in the blockchain ecosystem.

The announced hard fork was responsible for having ZClassic go from a bit over 10$ to over 200$ per one unit, as investors expected all new changes to be applied within the given deadline. When the announced changes weren’t applied, the price dropped as investors started to sell their ZCL, that way affecting the price to drop down to 50%. Now, ZCL is trading at 164$ per one unit after rising 11% in the last 24 hours.

The most recent change was probably the result of having developers confirming that the hard fork protocol is already prepared for implementation, but the announced date was moved four weeks after the original announcement.

In case the hard fork is implemented as announced, and all changes are put in practice, ZClassic will most certainly continue with increases, getting back to its all-time high and potentially going beyond that price within a short period. And, in case hard fork implementation fails, it is certain that this coin will suffer from many decreases.

Related Topics:Crypto MarketZCLZClassic
Up Next

TRON (TRX): On the Top of Its Own Game