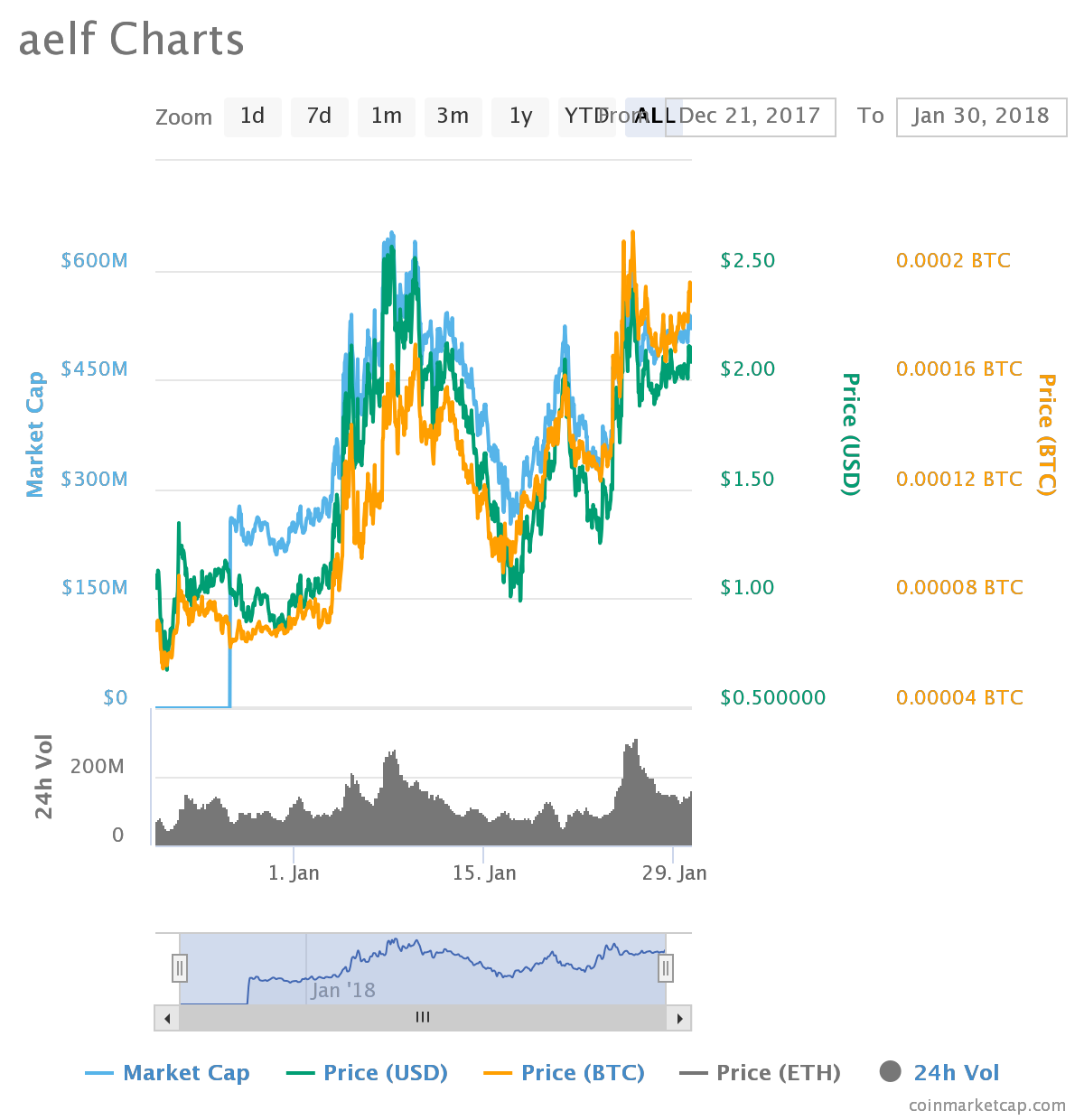 Although Aelf (ELF) is on large trading platforms such as Bitfinex and Binance, this digital coin had its glory stolen by other popular cryptocurrencies stealing its spotlight the most of 2017. But, with the arrival of a new year, there came new solutions, and that is when we heard about ELF again. But, as ELF has new solutions upcoming as well, in the form of a private sale organized to sell as much of this token as possible, we are witnessing a change in trending on behalf of this digital coin.

To keep up with this digital token, we first need to explain what ELF exactly is and which idea it represents. ELF or Aelf is a digital coin launched and created to serve a decentralized platform which would allow utilization of Blockchain in the physical world of business. That means that developers behind this token have the idea of increasing scalability within blockchain technology so that the current model of business doing could be modified and improved.

To solve the problem of scalability within blockchain technology, the developers have concluded that the best option for reaching their goal would be to create a blockchain ecosystem that would be decentralized but working in a similar way operative systems like Linux do.

So, while there would be transactions being processed in one group, other groups would be able to simultaneously perform different transactions within their network, but unrelated to other groups. The idea behind this type of system is to ensure that the groups for transactions are organized by similar “interests.” That means that different businesses would be organized in different groups, that way creating a well-organized ecosystem that would enable easy business doing and turn-key solutions.

So, Aelf has the main goal to become a blockchain decentralized platform that would meet business and mainstream institution needs with each smart contract running on its own network in the form of nodes, which would at the same time solve the scalability issue most platforms have.

The Goal and the Aelf Team

The goal of this project is to revolutionize the way people are doing business today, but at the same time, creators of this platform are looking into efficiency and security problems that have to be solved. In that spirit, each smart contract and each transaction group will run on separate chains, that way posing a new business model and revolutionizing several mainstream markets.

The idea is to accept any type of business and create a versatile community that will be able to obtain a self-sufficient status. Think about it as a reality within a reality where virtual world is actually connected to the physical world. The result would be simplified business ventures, safe and fast transactions and low fees. The ecosystem supported by this token should take on the announced novelties pretty soon, potentially creating an incentive business ecosystem that would be ready for several business types, models, and scenarios with a turn-key solution.

To make this project more desirable and boost ELF sales, the team has organized a private sale where they managed to collect 55.000 ETH on behalf of ELF token, that way boosting the price of this coin along the way. Another project with the idea of promoting ELF was recently launched when the team behind this coin invited people to join a project called Azeroth. The launched project is supposed to reward anyone who applies and registers with free ELF tokens in a way known only to the registered parties that are participating in this project.

All these projects, including the private sale, probably represent a way of making this no longer forgotten coin, well remembered and running across mainstream waters. It seems that this strategy is working pretty well as ELF is experiencing increases in price, leading from the original major increase in 2018 that happened on January 18th when a whole lot of different tokens were actually suffering from major decreases. And, on January 26th, ELF had another jump marked at 21% of increased price thanks to the launching of Azeroth, a free rewarding program.

Look for the team behind ELF to have all the announced changes implemented into a functional community. Once implemented, the price will most certainly rise.

We will be updating our subscribers as soon as we know more. For the latest on,  sign up below!

TRON (TRX) Won’t Be This Cheap For Much Longer