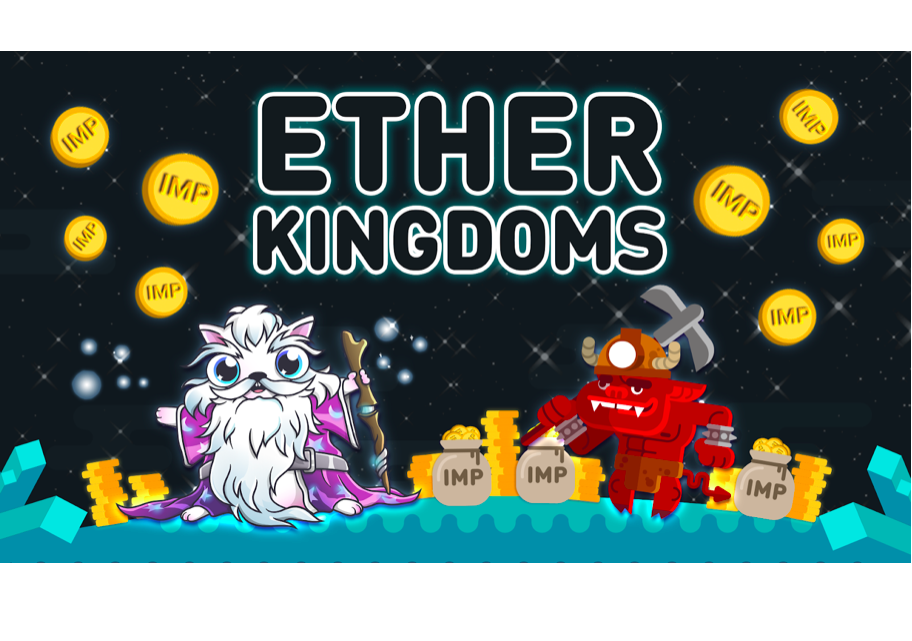 Ether Kingdoms, the world’s first free-to-play crypto mining game that focuses on Proof-of-Stake mining, has completed its beta testing phase. Ether Kingdoms presents players with an opportunity to earn significant mining rewards through gameplay, which is highly visual and fully realized in a game environment.

The goal of earn Imps, which are both the fundamental token in the game as well as important characters that can earn players real money. Through gameplay, players can earn up to 1%/day (which can be achieved by sending the maximum amount of imps to the mine – 10,000). This can be accomplished by receipt of a master node, which assures the player of a constant state of profitability.

The IMP token is also a real token traded on cryptocurrency exchanges. At this stage, the token is traded on Forkdelta and Mercatox, and developers are hard at work to facilitate the involvement of more exchanges over time.

Ether Kingdoms also involved combat of a sort. In addition to sending your imps into the mine as a mining force, you may also send them into battle to fight another player’s imp regiment using a special “Fight” button with information as to force size.

Once the provocation is accepted, it’s on!

In addition, Ether Kingdoms has a collectible component in the form of ERC721 tokens that take shape in the game in the form of “artifacts”, which can be bought and sold on special platforms such as OpenSea, or exchanged with other players in trade. Players can also integrate their CryptoKitties tokens into the game as animal companions.

With the completion of the beta testing phase, Ether Kingdoms can continue to expand and develop, with new features set to roll out, including rechargeable ERC721 tokens, clan battles, reduced mining rates, global and local opponent bosses, special locations for groups of players, and a new PvP fight mode.

Looking ahead, developers are committed to releasing a fully-functional mobile version of Ether Kingdoms during the first three months of 2019. While the token will not be supported in this version due to policies of mobile stores, artifacts earned in mobile mode will be accessible back in the world of the browser-based version of the game.

Ether Kingdoms has been cultivated without the need for an ICO token presale. 13 million tokens will be released over time, and will be divided up as follows: 75% is available for mining in gameplay, 10% will go to leaderboards and airdrops, and 15% is reserved for team members and the future development fund.

Players can access the tokens through airdrops, by mining them, or by purchasing them on an open exchange.

Because so many coins are available through free airdrops, the game can be considered free to play for anyone interested. The second round of the airdrop process got underway on August 24 and was released as a quest chain. Players will receive a loot box containing a pool of IMPs and potentially an artifact as well upon completion of a quest.

Anyone interested in playing the game right now can simply join the Ether Kingdoms channel on Telegram or Discord. Upon doing so, you will receive 10 IMPs and be set on several simple quests.

In total, the second round airdrop is expected to hit its 350k IMP limit fast, with 220 tokens extended to each participant.

The game has a number of new features out in August, including over 25 new artifacts, full support for 120+ levels, the potential to buy loot boxes, several new quest chains, and other features as well. The integration of ERC721 tokens and CryptoKitties is also new in August.

Chat with the team on Telegram – https://t.me/imptoken