While some of the major large market cap coins have managed to weather the recent storm with their primary 2018 support levels left still intact, a quick glance at the charts for IOTA and Tron (TRX) will make clear that these two are not among them.

However, if we see an inflection in this space over the following week, both of these coins may be capable of putting in relatively important bottoms. And our job as technicians at this point is to remain objective and listen to the signals being broadcast from the patterns and indicators that we see. 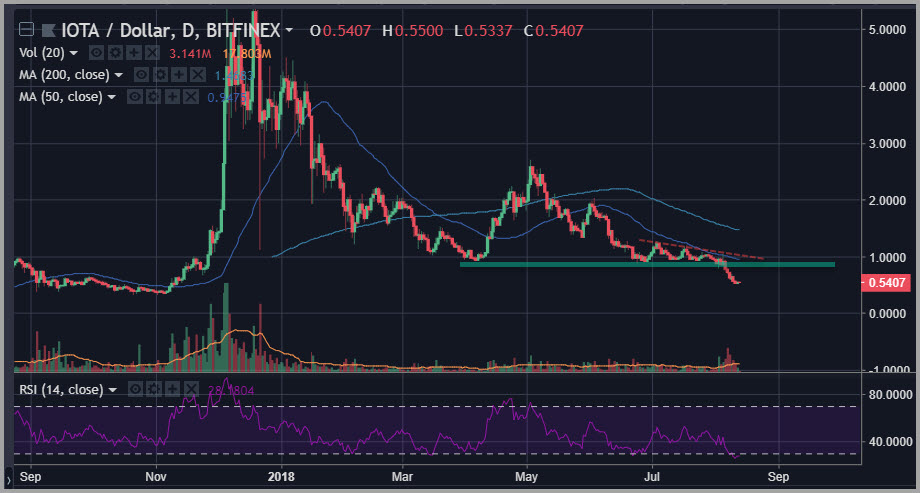 As we noted last week, IOTA has been breaking down out of a very clearly demarcated bearish descending triangle on the daily chart.

The most recent leg – the one that triggered this pattern and sent this coin spiraling lower – came off of a glancing blow ricocheting off of contact with a declining 50-day simple moving average.

The move that has resulted in is a brutal one, knocking IOTA off the edge of the table for losses surpassing 40% just over the past seven days.

This move has resulted in some striking oversold readings for oscillators on both the daily chart and the hourly chart, with a minor bullish divergence now appearing in the hourly MACD.

However, if downside were to resume from here in IOTA, the most obvious major zone below for clear support would be all the way down at the $0.32 level. 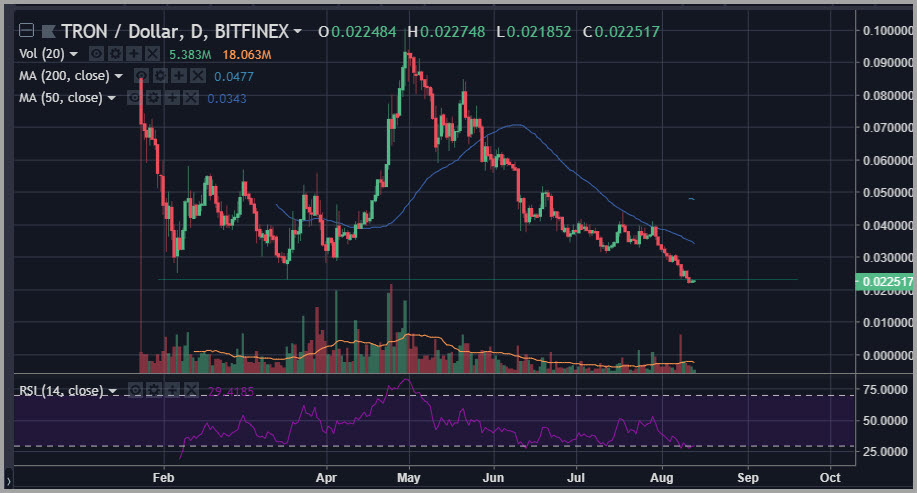 Tron (TRX) presents us with another example of a chart implosion over the past seven days, with the coin undercutting its 2018 lows in recent action on a sharp rise in volume that suggests a major run of last-ditch stop orders.

That means there aren’t any other support levels below that one can hang a hat on. However, the fact that volume surged on the break of the March lows suggests the possibility of a capitulatory low now within reach.

In addition, the breakdown that we have seen in TRX off of the pivot high logged on July 30 has taken the form of a possibly completed Elliott wave impulse move.

In other words, Tron (TRX) is badly oversold, and triggering some positive readings under the surface from major oscillators, but still within the confines of a highly directional downward trend that no longer has any clear support levels below as a technical safety net.

That means we have to watch the tape for a shift in tone.