John McAfee is undoubtedly the most candid man you’d ever follow on Twitter. I bet those who know him personally can attest to this quality of the Crypto Crusader who has nothing but best intentions for all Crypto enthusiasts and the crypto-verse in general. His candidness can be seen when he openly admitted that the famous software AntiVirus named after him is a piece of crap. This admission was a precursor to his announcement that he now has an unhackable hardware wallet available for his ever growing fans.

“For those of you unaware, know that McAfee Anti Virus is the biggest piece of crap on the planet; however, can you not cut me some slack, for having nothing whatsover to do with that company in more than fifteen years. My unhackable wallet, is unhackable.”

This wallet he is promoting is known as Bitfi. The wallet is said to be the most sophisticated instrument in the world and according to the product’s website. The first batch of the wallets has since sold out with the next batch being available in the next one day or so. This means that you could own one of these wallets as soon as June 4th. 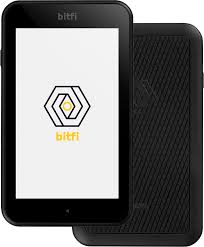 McAfee would reiterate the ‘sold out’ statement via the following tweet.

The first batch of my unhackable wallet sold out in twenty two minutes. The second batch sold one hundred fifty units until the site crashed for keeps! In three days, my third batch of Bitfi will be released. Keep your crypto hundred percent safe with https://t.co/ATFaxwUzQC.

John McAfee is also knee deep in a new crusade against popular cryptocurrency exchange of HitBTC. He claims that the exchange has continually oppressed the ‘little guys’ in trading by making its services unavailable through numerous buy-in fees as well as sometimes locking up the coins and tokens of users without a clear explanation. His most current tweet against HitBTC goes after the exchange’s CEO.

36 hours and not a single response from HitBTC. Please God …. does this not tell you something about the character of their CEO? Please see what is happening here.

McAfee seems to have a valid point for many of his Twitter followers are continually airing their horrible experiences with the exchange. Some have completely boycotted the exchange with some planning to do so as soon as their crypto assets are unlocked on the platform. This follows a similar battle McAfee had with the American SEC. McAfee has also not held back his opinion that Bitcoin has been intentionally manipulated to current low levels. He is truly a crypto crusader!