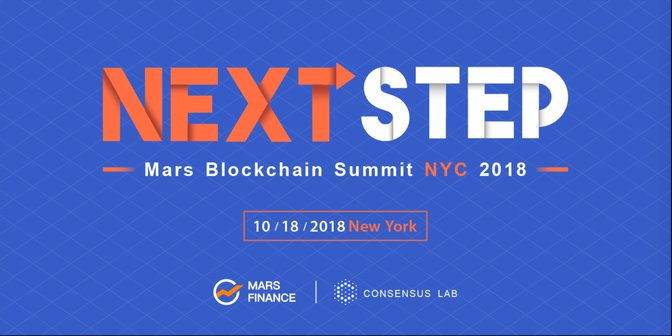 The cryptocurrency market is not predictable as inevitable changes develop continually. But one blockchain project that’s become the talked-about pet of the market and has been consistent in making headlines lately is Ripple. Of course, the credit goes to its team and the head – they tend to stay engaged and build trust as it should be done.

Now, Ripple has come to the lights yet again. Mars Finance, in collaboration with Chinese investors, is set to hold a Blockchain Summit on Oct 18, 2018, in New York. It is important to know that the upcoming Summit will host great Fintech companies, global leaders in the financial sector of the world from Wall Street, China, and the investment industry.

Moving forward, the Summit might include a discussion with Ripple, Morgan Stanley, NASDAQ, Standard & Poor’s, Barclays, and Digital Galaxy. On a relevant note, the founder of Mars Finance, Fred Wang, is aiming at increasing the reach of Mars Finance to other parts of the world by creating a Mars Finance US Edition that will also be unveiled during the Summit.

On that view, Mars Finance will not only be featured in China alone but also in the United States, as this will further boost the importance of blockchain and link-up blockchain enthusiasts in the crypto-sphere.

Invited personalities from China that are going to be available for the Mars Blockchain Summit include: Dao Yuan, Chairman of Zhongguancun Blockchain Industry Alliance; Shuoji Zhou, a well-renowned personality in China’s blockchain Industry and the CEO of FBG Capital; Chuanwei Zou, Chief Economist at Bitmain; Tianyuan Wei, Partner of Sharp-Eye Capital; and Feng Han, of Elastos.

Other notable personalities that are expected to attend the event also include, the CEO of Ripple (XRP), Brad Garlinghouse, CEO of Coinbase, Brain Armstrong, Winklevoss Brothers, Katina Stefanova of Marto Capital, Danny Aranda, an executive at Ripple (XRP), and Eugenio Gomez, a Financial Professional at Harvard Law School.

Subsequently, the upcoming Mars Finance blockchain Summit is expected to be a bigger-scale event, and companies such as DFG, Sharp-Eye Capital, Consensus Lab, EUB Chain, and Crypto Capital will also co-host the event together with Mars Finance. Another attractive side-event that will be added to the Summit’s theme is an all-night cocktail party, which will attract investors to exchange pleasantries.

That aside, the Chinese cryptocurrency frontrunners (as well as others such as the head of Ripple) will get to meet great investors and FinTech institutions from WallStreet. There are no doubts that the upcoming Mars Finance Blockchain Summit will be another important event in the blockchain world.

It could set a new landmark in the blockchain industry. Will blockchain be implemented in the traditional finance system soon since things are catching a good bit of steam now? Well, only time will tell on that, and as the Mars Finance US Edition is set to be released, the event might play an essential role in that cause.

But one thing is for sure, the CEO Ripple, Brad Garlinghouse is on a mission to revolutionize how the world deals with finance currently. And, he is trying not to miss a single opportunity to boost the awareness and mass adoption of the blockchain platform he leads.

After a significant dip experienced by the market last week including XRP, Ripple is recovering gradually. At the time of writing, XRP is in the green and has increased by 5.84% over the previous 24 hours. At the press time, Ripple’s digital currency token is priced at $0.465 with a market capitalization of $18,609,913,871. The crypto is the best gainer among all top digital currencies if we take last 24 hours’ price performance in the account.