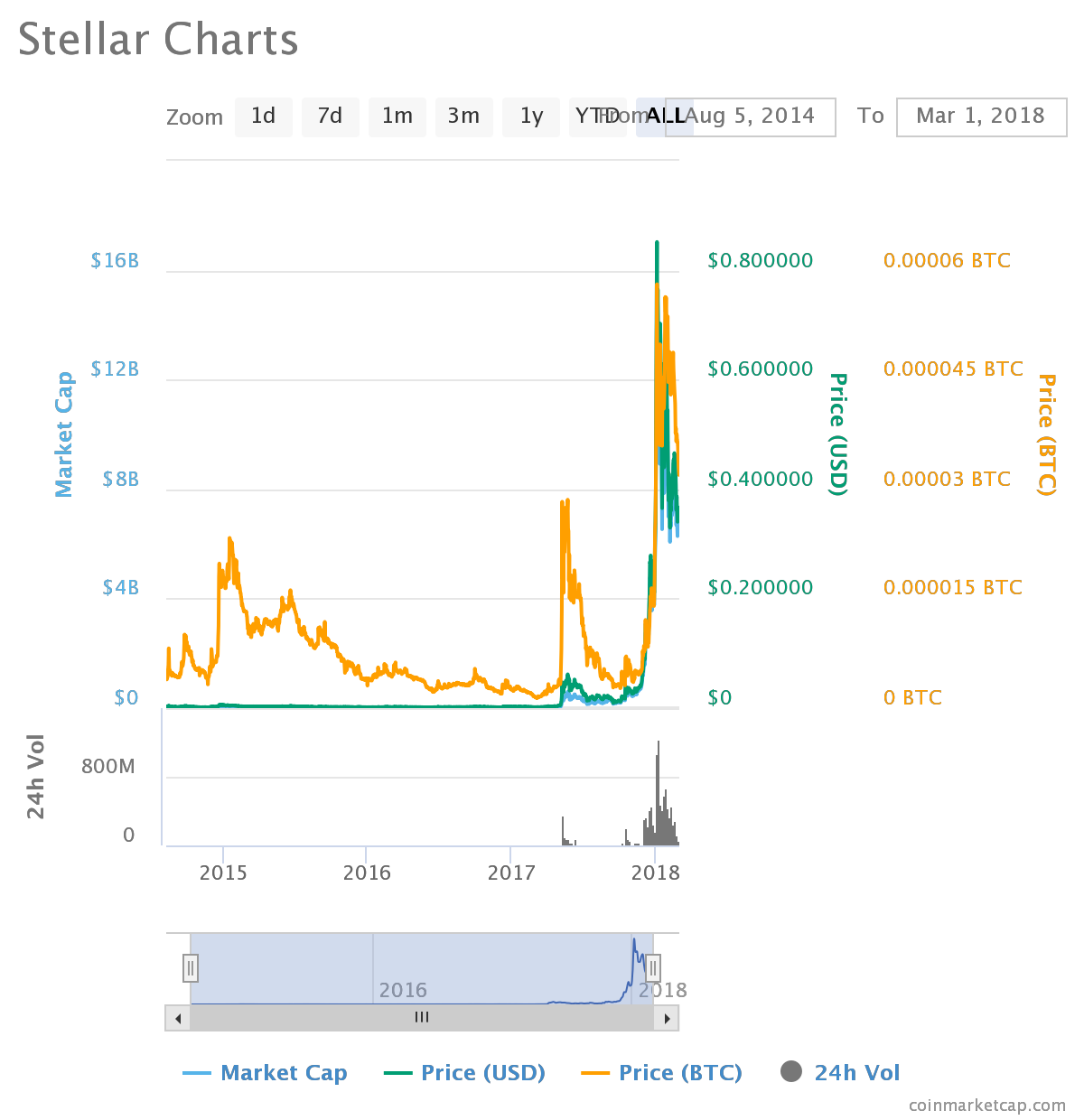 Although the beginning of January 2018 went on pretty smoothly for Stellar, it seems that this currency is now among top 10 currencies that lost the most of their value up until the last week of February. What is going on with Stellar and will the recent 20% dip end up affecting XLM in the long run?

A Little About Stellar

Stellar is a decentralized blockchain-operating value founded by Jed McCaleb. McCaleb was also a co-founder of Ripple, so these two currencies share more than just a couple of similarities.

Stellar is a payment technology that aims at creating an easy way of making transactions between multiple users set on a decentralized ecosystem. With this idea, XLM is even using the same protocols as Ripple. However, the similarities between the two make different ways after 2014 when Stellar launched SCP, which is a protocol that changed the way Stellar works.

Now, Stellar is an open source system, Ripple is dealing with a closed source, which is at the same time the main difference between the two. Moving forward from the story about the differences between Ripple and Stellar which were both developed with the help of McCaleb, Stellar is focused on the idea of enabling fast and cheap global payments for the developing countries as well as for people who don’t own a bank account.

Unlike many other altcoins, XLM is not taking advantage of miners for their need of approving transactions. So, instead of having miners within the network to approve transactions, XLM is using the FBA protocol.

With FBA algorithm, Stellar has enabled fast transactions and prompt transaction approvals. This is the case because this algorithm uses only fragments of the network at the time.

Since Stellar has the required technology to support these demands, it is no surprise that this currency had an amazing rise in its price at the beginning of January 2018. At that time Stellar was dealing at over 1$ per one unit, which was at the same time a value multiplied 15 times in oppose to XLM’s previous price.

What is going on with Stellar?

Unfortunately, the previous week was rough on Stellar as this currency got on the list of top ten loses on the crypto market. In oppose to 2017 when Stellar had an amazing progress in its price, XLM also represented the top currency when it comes to price gains.

Now, we are seeing a completely different story as XLM is trading at an almost underrated price of 0.35$ per one unit. Unlike the price this currency was dealing at during January, 0.35$ is pretty low for a coin like Stellar.

The most recent fall in its price that consequently brought it to the current value was market at -2.94% against the dollar.

In case you are looking for a solid good investment, at least you can take advantage of buying XLM at a pretty low price with the condition that you are interested in operating with this currency.

Stellar and Its Partnerships

If you are too concerned about the Stellar’s latest drop, you should probably consider keeping calm about it as Stellar is here to stay.

Given the fact that XLM is a combination of fast and cheap transactions, making online banking as simple as a piece of the pie, many interesting partnerships were sealed over the years since the first time of its launching.

One of the companies that believes in Stellar is IBM which is one of the greatest software companies ever to exist. IBM has mentioned their partnership with XLM back in October of 2017, also announcing that IBM itself is looking forward to using blockchain technology in their projects.

Thanks to their partnership with IBM, Stellar is actually being used in their blockchain banking protocols.

Another partnership worth the mention is their agreement with ICICI Bank, which is the biggest bank in India. Since banking in India is still in the developmental stage, ICICI’s partnership with Stellar has enabled this bank to operate with transactions through XLM’s blockchain system.

Since Stellar is successfully operating with blockchain cross-payments between the users, Deloitte, which is a private consulting company, also sealed a partnership with this currency.

If you pay attention to the way Stellar is operating, its technological capabilities, adding these partnerships to the table, it is more than obvious that this currency will most certainly find its way back to dealing in green on the long run.

For now, this amazing currency can be purchased at a pretty low price, which could make up for a solid good investment.

W3Coins (W3C): The Multi-Dimensional Crypto Solution for All Industries