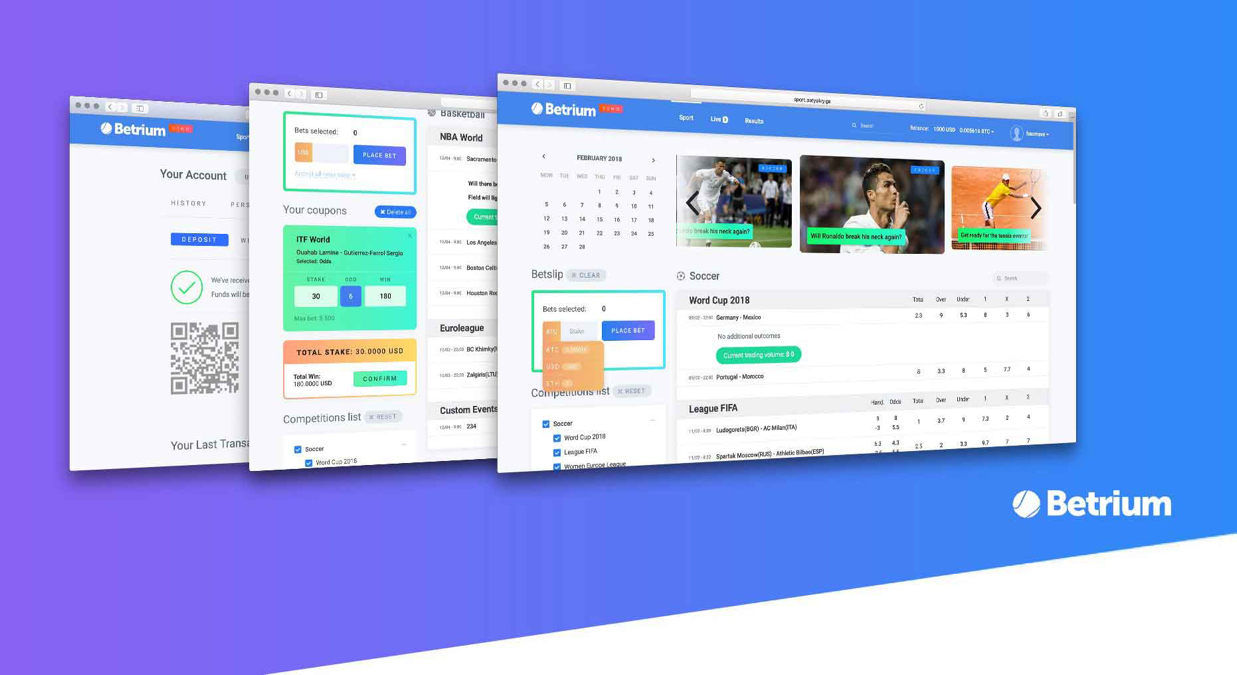 The project is supported by Kevin Dolan, World Series of Handicapping 2015 champion, the “The Complete Guide to Sports Betting” book author. Kevin acts as an advisor in the project.

Recently, Betrium released the demo of the sportsbook, which is available on http://betrium.ga

During the next two weeks Betrium will release betting exchange alpha along with iOS and Android applications for sportsbook. In January, Betrium was a sponsor of Lamborghini team on 24H Series in Dubai.

Betrium has partnered with VAVEL.com, an international sports media with over 35 million of visits, which became an accredited media of FIFA World Cup 2018. https://www.vavel.com/en-us/journalism/871782-vavel-media-partners-with-betrium.html

“For VAVEL, this partnership with Betrium guarantees, our willingness to support and backup a project since its inception is called to revolutionize the sports betting industry from scratch given the brilliant idea of decentralizing the way to bet making it accessible globally without depending on different international laws and regulations. We believe in Betrium because of the ease with which its users can perform transactions through cryptocurrencies and their roadmap is frankly hopeful. VAVEL trusts Betrium simply because it is the future of betting in sports.” In the early March Betrium’s team began its roadshow, during 20 days the team will visit 5 blockchain conferences all around the world: — Betrium became a sponsor of the Money20/20 Asia conference in Singapore. The project will be among such companies as: Google, Paypal, Mastercard, GitHub, Toshiba, HSBC etc.

— Luke MacDonald, a well-known professional gambler with over $1.9 mil turnover, supported Betrium and entered to Advisory board of the project.

— Betrium was a sponsor of Lamborghini Huracan Super Trofeo on 24H Series race in Dubai.

— The project was an official sponsor of the TNABC conference, which took a place in Miami on 17-19th, where Betrium’s CEO Max Suvorov spoke and presented the project.

— Betrium is also a sponsor of the racing car on the Lamborghini Super Trofeo Middle East race in Abu Dhabi on 2nd of February.

Betrium’s mission is to expand and to become a global key-player in the gambling market. The Man Behind ICO Services, Inc. Advocates for Transparency and Community Building

LAS VEGAS, February 9, 2021 (GLOBE NEWSWIRE) – ISW Holdings, Inc. (OTC: ISWH) (“ISW Holdings” or the “Company”), a global brand management holdings company with commercial operations in Telehealth and Cryptocurrency Mining, is excited to announce that its revolutionary Pod5 Cryptocurrency Mining Pod will be powered up into full operational launch at the Bit5ive renewable energy cryptocurrency mining facility in Pennsylvania on February 12, 2021.

“We are very excited to finally be ready to launch full mining operations at a time when margins are at historic levels following further strength in the value of cryptocurrency assets,” commented Alonzo Pierce, President and Chairman of ISW Holdings. “But make no mistake about it: we are doing this because we have a fundamental belief in the long-term future viability of cryptocurrency systems as stores of value and legitimate platforms for global commerce. We started diversifying our cash into Bitcoin nearly two years ago. And we partnered with Bit5ive early last year and began the design for our Pod5 unit when Bitcoin was still under $10,000 per coin.”

The Company formed a joint venture partnership with Bit5ive, LLC, (“Bit5ive”) in May 2020 to build and deliver an elegant, powerful, and efficient data center pod design. The Pod5 Datacenter is the result.