Observers and experts across the domain of cryptocurrencies have noted two coins performing exceptionally well in a period of Bitcoin uncertainty. Bitcoin has over the past few years emerged to be the leading player of the cryptomarket. The performance of other coins and tokens are correlated closely to the performance of BTC. When Bitcoin pumps, every other coin and token reacts the same way. If Bitcoin tanks, the rest of the cryptomarket also takes a hit.

However, two coins have proved to be resilient. One of these is Litecoin, the gains of which can be accredited to two factors. The first is the supposed Litecoin cash (LCC) fork which took place on the 18th of February 2018. The second reason for Litecoin’s surge is the release of its digital wallet known as Litepay on the 26th of February, 2018. The other coin, which is showing remarkable performance in the cryptomarket irrespective of Bitcoin’s performance, is Ethereum Classic. It is currently trading at 27.10 dollars. 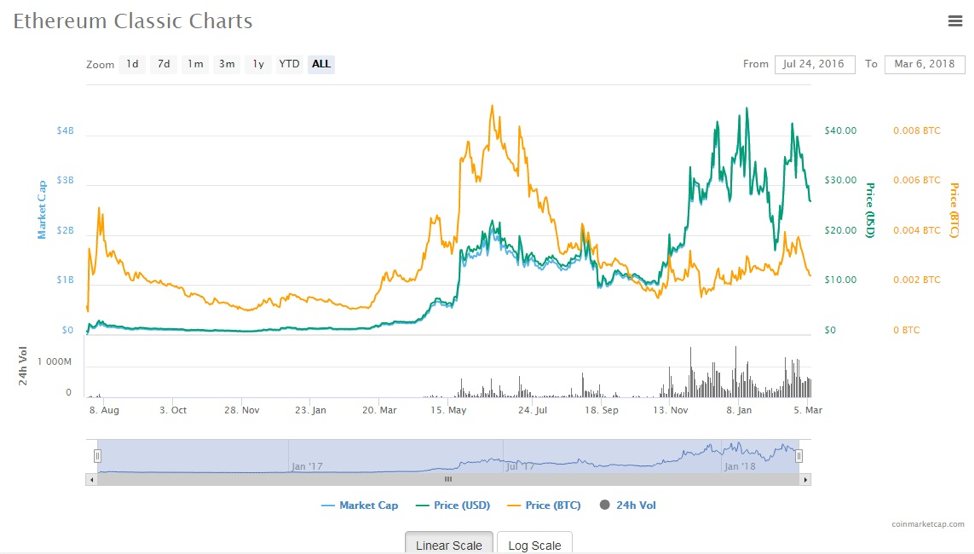 The reason behind the brilliant performance of Ethereum Classic (ETC) can be cited to be the Callisto (CLO) Airdrop announcement in January 2018 made by the coin’s development team which has been working on the Callisto Network Project. The ratio of the CLO airdrop is 1:1 for ETC holders, and is slated to happen after the targeted 5,500,000 block of the Ethereum Classic ledger.

The Callisto Network Project is an experimental change in the Ethereum Classic protocol which aims to establish a smart contract based on the chain-governance system. This system has a built-in transparent financial funding mechanism. The protocol will balance the interest in the network between the miners and coin holders.

Callisto (CLO) is a distinct token and its blockchain will be separate from that of Ethereum Classic. Callisto also introduces a cold staking protocol that provides nodes to coin holders as a reward for participating in the network. It is to be noted that a node is not mandatory for a cold staking protocol. Owners of CLO can lock their funds in a Callisto Treasure smart contract for 1 month or longer. Each cold staker account can submit a development proposal to the Callisto treasury smart contract or vote for or against pre-existing proposals. In this way, each cold staker account can participate in the decision-making process.

Now the question arises as to how you can claim your Callisto tokens. This should automatically immediately happen after the fork and depends on whether your Ethereum Classic coins are in an exchange or in a wallet like MyEtherWallet, ClassicEtherWallet, ClassicMask among others. In the case of the former, the exchange might not make the CLO tokens available immediately for the ETC owner. In the case of the latter, an ETC coin holder needs to configure the wallet to show Callisto Tokens and he will find it there.

Summarizing, the Callisto airdrop on block 5,500,000 is the primary factor that has been attributed to the upswing in the price of Ethereum Classic (ETC) in the markets. Many traders are rushing to buy ETC in the hopes of getting CLO tokens For free. This is a good strategy, especially if the Callisto project turns out to be a success and the value of token rises by a significant margin. If you are holding ETC coins right now, the blockchain snapshot will be taken at 5500000 blocks and you can claim CLO tokens as long as you have the private keys for your ETC wallet under your control.

As of 5th March 2018, the Ethereum has 600 blocks to go, before the snapshot for the Callisto airdrop is slated to take place. The current price was not the anticipated figure when the news was initially declared. A Bitcoin drop, an overall decline in the cryptomarket and a last-minute statement from Bittrex announcing its lack of support for the airdrop, cumulatively brought an adverse effect on the price of the Ethereum Classic coin.

When the news of the airdrop was declared, Ethereum Classic witnessed a surge in its price from around 40 dollars to 46 dollars. In February 2018; ETC reached a BTC price high – trading at about 420K Satoshis. It had not seen such a surge in price in about six months. However, this price high it did not sustain for a long time and now with Bittrex withdrawing its support, the ETC/BTC price stands at around 251k Satoshis range.

Very recently, Bittrex, which is one of the most popular exchanges, issued a statement saying that it was unable to support the ETC/CLO airdrop. The team at Bittrex blamed the development team for contacting them last-minute and not giving them enough time for a rigorous token review.

We will be updating our subscribers as soon as we know more. For the latest on ETC, sign up below!

Related Topics:CallistoCLOETCEthereum Classic
Up Next

Why NEO is one of the best performing coins