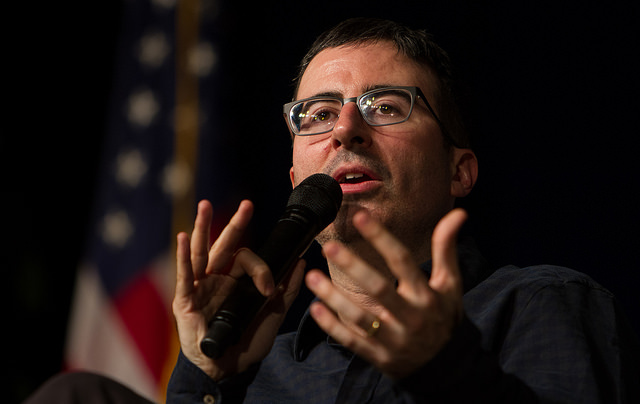 Block.one and their EOS.IO platform aim to supplant Ethereum as the blockchain of choice for smart contracts. Their massive Initial Coin Offering took place over the course of a year and raised nearly a billion dollars. This event alternately garnered both praise and criticism. Praise for their business success and solid roadmap, and criticism for being the height of the recent ICO craze. Ultimately, the EOS.IO platform is unproven, but is still on schedule and even ahead of some other contemporary blockchain projects. This made their singling out by John Oliver somewhat baffling, if not necessarily incorrect.

On March 11th, popular entertainer John Oliver devoted an entire episode of his show to cryptocurrency. The show, ‘Last Week Tonight’, often tackles political or technological issues that have captured the public zeitgeist. In a way, cryptocurrency’s appearance on the show is a good indicator of public interest. In fact, most crypto-savvy watchers felt that the segment was surprisingly neutral. Oliver admitted that cryptocurrency combines, in his words ‘everything you don’t understand about money, with everything you don’t understand about computers,’ He went on to say;

Oliver then turned his ire towards the EOS.IO blockchain platform. Most of his sharp comments were saved for Brock Pierce, a former child star, and cryptocurrency celebrity. Brock Pierce’s tangential involvement with EOS is enough, in Oliver’s eyes, to taint the project. Pierce has been at the center of a variety of impropriety scandals, along with several bizarre unrelated events.

Brock Pierce and his Involvement

Brock Pierce originally gained fame by acting in the first two Mighty Ducks movies, as well as First Kid. In the time since his acting career, he involved himself with a variety of entrepreneurial pursuits. During the original Dotcom Bubble, Pierce helped found the Digital Entertainment Network. Aimed at providing video entertainment over the still new Internet, DEN ultimately collapsed.

The collapse brought several scandals to light. Alongside the average Dotcom scandal of a non-solvent project that produced little of value and overpaid executives, darker secrets were exposed. Three of the founders of DEN were accused of sexual abuse of minors, including Brock Pierce. While the other two founders served time in jail, Pierce avoided this fate. It was these scandals that John Oliver focused on during his show. Pierce was then involved in a variety of digital start-ups before helping to found Blockchain Capital, which led to his involvement in Block.one and the EOS.IO platform.

In a show of excellent public relations management, Block.one responded in a lighthearted and conciliatory tone. They were quick to point out that they enjoyed the segment, and appreciated the mainstream media attention that it afforded. However, they did respond to some of the criticisms that Oliver levied against them – namely the employment of Brock Pierce. Of particular note, Block.one had already parted ways with the controversial figure. In fact, they had done so over a week before the segment even aired.

Many of the issues that John Oliver suggests in his diatribe against the EOS.IO platform are not unique. He posits that there is no product and no reason for the project’s current valuation. The same could be said of any cryptocurrency ICO, and even most crowdfunded projects. EOS.IO is a particularly confusing target, given their high profile development team and professional attitude towards the project. Block.one said as much in their rebuttal and included that their project is very visible on Github – where anyone can verify their progress.

The Market Effect on EOS

The EOS cryptocurrency, being the most visible sign of investor confidence, fluctuated over the past 10 days since the segment aired. It stabilized around the $6 USD mark. Once John Oliver’s episode on cryptocurrency aired, the price of a single unit of EOS tanked by 33% to just over $4. While this is obviously negative news overall, it is the next several days that provide a very positive indicator. The price recovered nicely and is now sitting at $7.20 – higher than before the episode aired.

Cryptocurrency investors know to do their own research – and they are confident in what Block.one intends to provide. The professional, lighthearted response provided to John Oliver’s criticisms furthers the positive image that most investors have of the new blockchain standard that EOS.IO represents.

Why Should Anyone HODL Litecoin in 2018

The Fall of Monero (XMR): Will It Recover?