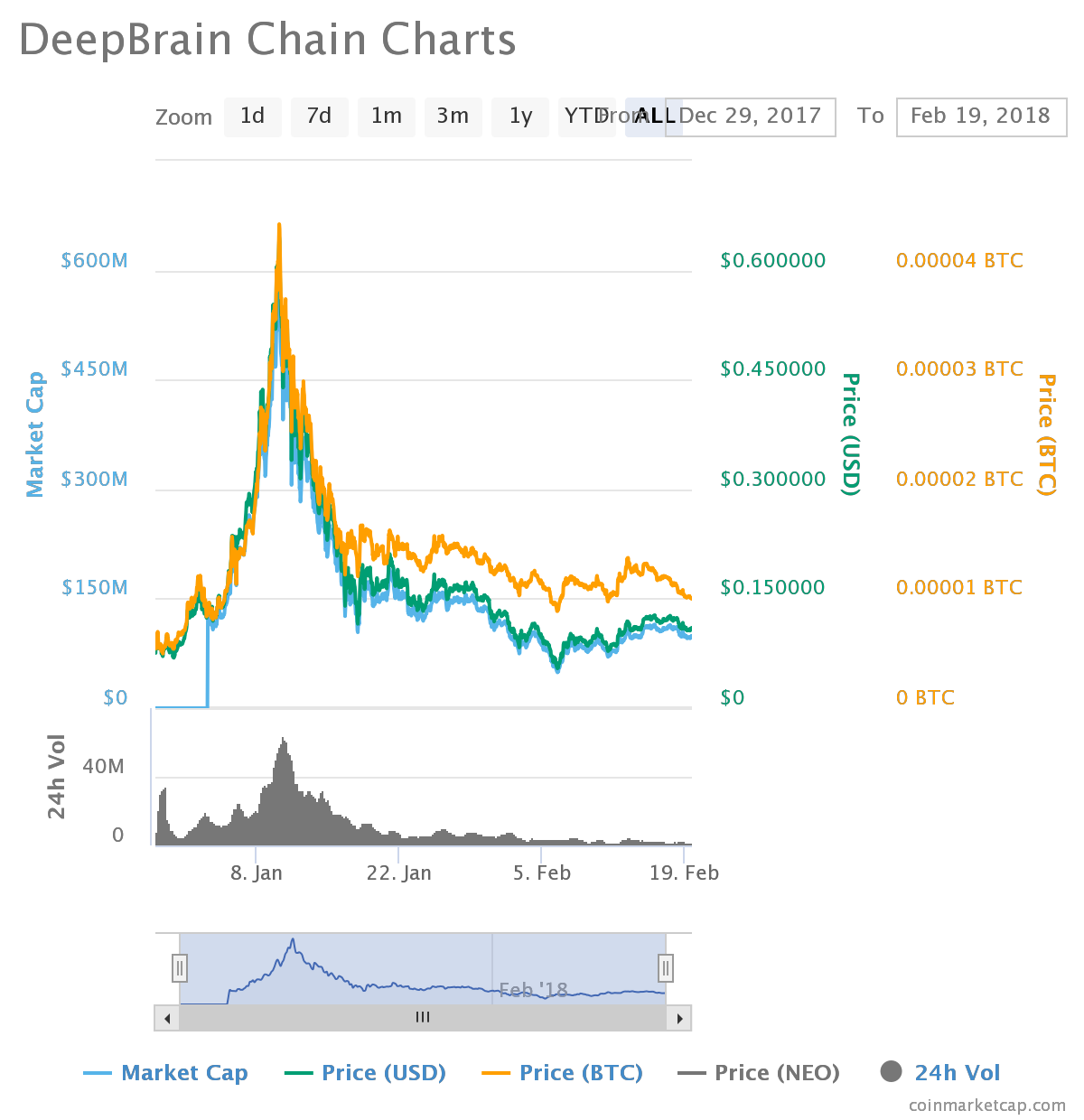 You have surely heard of DeepBrain Chain in case you are faithfully following up with crypto technology and artificial intelligence. In case you haven’t heard of DBC, you should know that this platform is the first Artificial Intelligence computing platform collided with blockchain technology. In the spirit of revealing more about this currency as well as to find out how well DBC is doing on the market, we are analyzing DeepBrain Chain and its AI platform.

What exactly DeepBrain Chain is?

Besides from having a neat rhyme in its title (NOTE: joking with irrelevancy of noted information!), DeepBrain Chain represents the first AI blockchain platform ever to be created. The DeepBrain Chain network is built upon NEO platform – one of the largest blockchain platforms in the world of cryptocurrencies after Ethereum. So, we can smell a huge story there already at the beginning.

The main idea behind DBC network is to help start-up companies that are inspired by Artificial Intelligence and everything related to this wonder of the New Age, to easily fund their project. The only condition a start-up must meet is to be interested in developing and implementing practical Artificial Intelligence products, services, and systems.

Since Artificial Intelligence programs and projects demand massive amounts of power, DBC network has come up with the idea to create a decentralized blockchain platform that would provide these start-ups with the needed energy by powering up the blockchain with a large network of computers. In this case, the computers being used for powering up this network belong to members of DeepBrain Chain that are keeping their computers running so the information related to AI and the start-ups could be easily “crunched” without compromising the system.

To make this power-sharing meaningful both for the start-ups that are using the energy and for the members providing the power, all DBC users that are a part of this computer network are being rewarded for their contributions. So, that is how DBC members are enabled to earn their DBC tokens simply by sharing their computers with the network, at the same time contributing to the “greater good” across the community.

Once the providers get their DBC tokens, they can sell them, use them or store them just as they would if the tokens were bought. So, there’s a neat way for earning some tokens for anyone interested.

How well is DeepBrain Chain doing at the current moment?

Given the fact that DeepBrain Chain entered 2018 with high hopes, the beginning of the current year wasn’t easy in this currency.

Only 30 days ago, DBC was down for over -50% and three months ago this token was traded as non-existent with the value of 0.00$ per one unit. On the bright side of the story, DBC did get a portion of the expected rise in 2018 as this currency jumped for over 15% against the dollar a couple of days ago. The rise was noted in volume, and the jump was surely seen as a positive change unseen in a long time for DBC.

But, then we had another drop today on February 16th, only a couple of days after the initial rise. The drop was marked within a 24h period, and it totaled a fall of -6.41%.

That means that DeepBrain Chain tokens are currently being traded at 0.1198$ per one unit, which is DeepBrain Chain’s all-time high within the past 200 days.

That being said, it seems that even after the most recent drop DBC has gone through, this token is doing pretty well in oppose to the previous state of its price.

The total market capitalization of this coin is 107 million dollars, which is a huge deal given the fact that this currency is still very young when compared to a mass of other coins and tokens.

DeepBrain Chain was launched in November 2017, so you need to take in mind that this currency is still very young, so having a value of 0.1198$ is a great step towards what is expected from DBC.

How well will DeepBrain Chain be doing in 2018?

After trading as non-existent only 100 days ago and with having a huge downfall just 30 days ago, 2018 finally started as planned for DeepBrain Chain, having this token traded at o.1198$ per one unit.

Since DeepBrain Chain is unique in the world of cryptocurrencies, related to Artificial Intelligence, you can say that there is huge investment potential in this network. If you add the fact that DBC is also operating on one of the largest blockchain platforms, like Neo, high hopes for this token are entirely and realistically justified.

If you also believe that DeepBrain Chain is destined to make a massive success by the end of the year, the time for investing in this network has never been better as you can still make bulk investments as the price is still reasonably low.