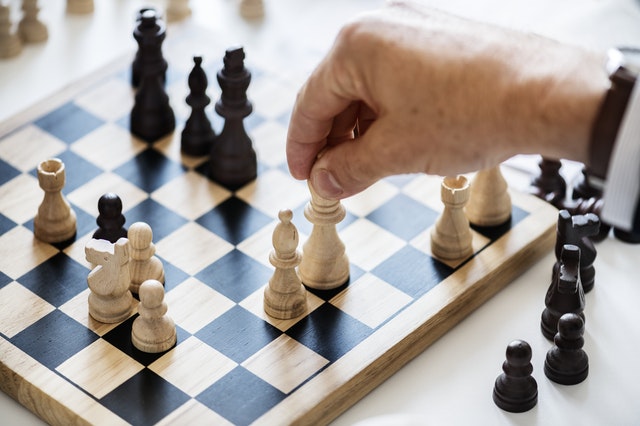 EOSIO (EOS) is a cryptocurrency token and blockchain that seeks to operate as a smart contract platform for the deployment of decentralized applications and decentralized autonomous corporation.

The aim of the platform is to provide decentralized application hosting, smart contract capability and decentralized storage enterprise solutions that solve the scalability issues of blockchains like Bitcoin (BTC) and Ethereum (ETH), as well as eliminating all fees for users.

The main native token, EOS, is a utility token that provides both bandwidth and storage on the blockchain, in proportion to total stake (owning 1% of EOS tokens allows for usage of up to 1% of the total available bandwidth etc…). EOS tokens also allow the owner to cast votes and participate in the on-chain governance of the blockchain, again in proportion to the owner’s stake.

With that behind us, let’s take a look at the technical picture of EOS to see what may be in store for both investors/traders moving forward.

Back in early April, EOS broke-out from the 5 handle (5.92) on 3X its average daily volume and proceeded to put in a massive move over a three week period which witnessed returns of 300% before exhausting itself at the 23.33 level as we can observe from the Chart below: 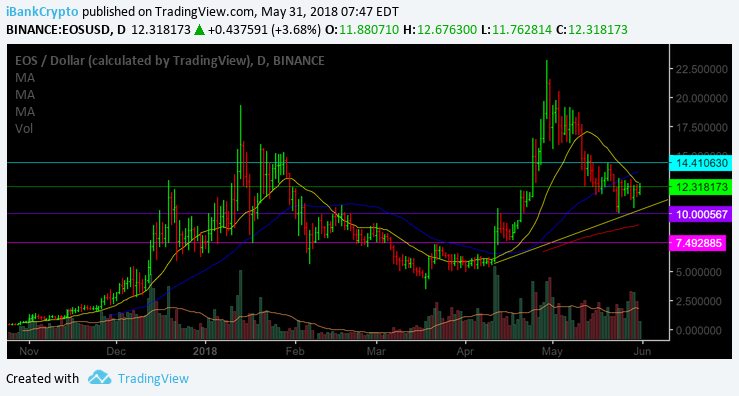 When observing the action above, we can see that after the massive move from early to mid-April, which produced enormous gains for those investors/traders involved, EOS has since found itself in pullback mode digesting/consolidating the run.

In addition, we can also witness that EOS presently trades below both its 20 (yellow line) and 50 (blue line) day moving averages, yet remains comfortably above its rising 200DMA (red line), which suggests that we have a mixed picture technically as well as some indecision from a time-frame perspective.

Thus, in order to try and wrap our arms around the overall action of EOS, when we zoom-out to the weekly time-frame, we get a clearer display as to what may be in store for both investors/traders moving forward from the weekly Chart below: 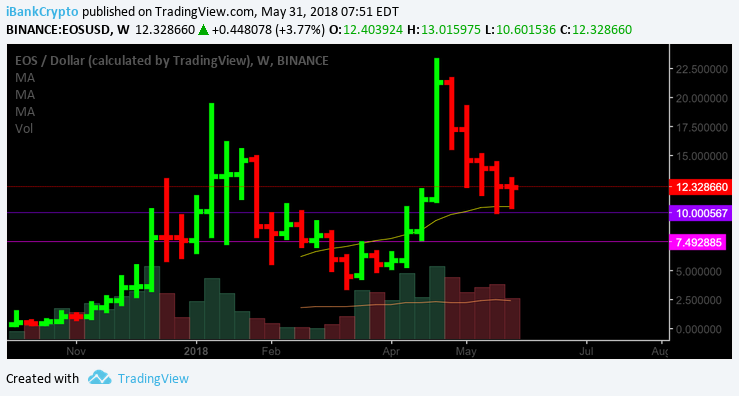 When observing the action on the weekly time-frame above, we can see that EOS remains in decent technical shape despite trading lower these past four weeks after the massive run in April.

In addition, despite the overall poor climate conditions throughout the entire cryptocurrency universe where recent selling pressure has been relentless, EOS has weathered the storm in relatively fine shape.

Thus, let’s take a look at some levels that may provide both investors/traders with some clues/evidence with respect to direction as well as clarity.

If, at any point in the days ahead, EOS  is capable of going topside of the 13.50 level and perhaps more importantly, the 14.40 figure, such development, should it materialize, would likely set the stage for an advance into the 16-18 zone and perhaps higher. On the other side of the ledger, initial short-term potential support can be found at the 10.20 level with more meaningful support located in the 7.50 area.

While EOS continues to display decent technical and relative strength in an extremely challenging and difficult environment, it appears that it’s awaiting its next moved via the mixed signals from a time-frame perspective.

Therefore, both investors/traders may want to continue to monitor the action in EOS with a close eye in the days ahead for further evidence and or catalyst with respect to direction.