Most blockchain projects and cryptocurrencies are making several developments behind the scenes. Tron is on the move and at the moment hardly a day or two passes without an announcement that the TRX enthusiasts can lick their lips about. Perhaps, all the steps by Tron are only to make the coin stronger and even the best among its competitors.

New Game on the Cards

After launching their first game, Magic Academy, earlier this month, we’re now about to see a new game on Tron. Coin war is about to get launched on the Tron entertainment system. The new game by the FCC team is all about the financial prediction scenario.

The first game Magic Academy has redefined the manner in which players interact with other players, their games, and game’s developers. Players buy, sell, or trade any game they wish with freedom. The new game, Coin War, serves a useful purpose too, let’s discover what’s that right below.

What Tron Enthusiasts Should Expect

Undoubtedly, Tron has entered the world of blockchain gaming, and players now have every reason to smile day after another. Coin war that is about to be launched will help predict the price changes in the mainstream cryptocurrencies as well as the future trends in major global stock market indexes for a certain period.

Basically, it makes the rigorous predication entertaining as it will be easier to accomplish even the most stringent things in entertainment and make the prediction behavior valuable. Getting the most critical encouragement in any game is essential to moving forward, and hence, that is precisely what Coin War has in store. 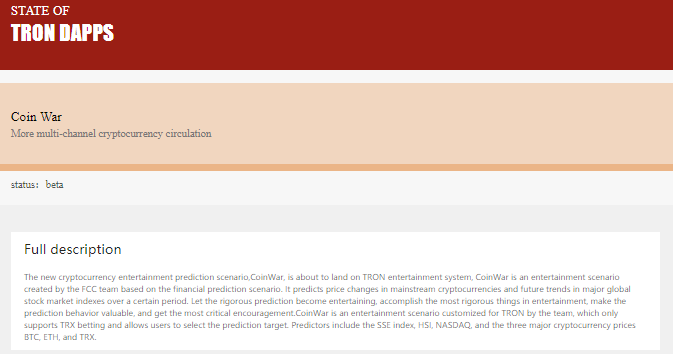 FCC team has customized this entertainment scenario for Tron that it supports only TRX betting and will allow the users to select the prediction target easily. The predictors here include the SSE index, NASDAQ, HIS, as well as three major cryptocurrency prices ETH, BTC, and TRX. We think at least a couple other cryptocurrencies like Ripple’s XRP and Litecoin might get added to it after the game make it to the public (it’s in beta as of now).

Will Coin War be huge for Tron (TRX)?

The gaming industry is without denial a multi-billion industry which is slowly but steadily getting disrupted by the blockchain technology. The DApps. At the forefront of this disruption is Tron with all technical capabilities which allow it for development of even more complex online games in a decentralized environment.

With the rate at which Tron is making developments, it may be just a matter of time before it overtakes the competitors. Massive usage of Tron (TRX) can only be predicted, and perhaps that may drive up the value of Tron. However, for now, we wait for the launch of Coin War and watch other news as they unfold.