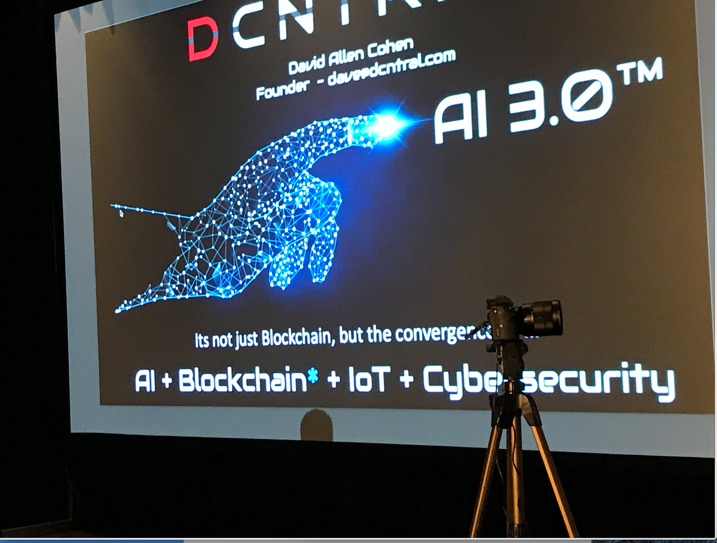 Distributed computing software and network engineers are taking a variety of approaches in designing and building secure, peer-to-peer transactions and distributed ledger systems that solve the lack of scalability and processing efficiency, as well as the tremendous energy consumption, that plague existing blockchain distributed ledger systems. Dcntral.ai founders David Allen Cohen and James Barry figure prominently among them. www.dcntral.com.

Having taken a deep dive into new variants on the blockchain theme, including Ethereum’s blockchain and IOTA’s “blockless,” Tangle-based means of authenticating, verifying and creating new blocks of transactions, Cohen and Barry are working with Hedera hashgraph specifially using the Hashgraph Consensys algorithms to develop what Cohen dubs “AI 3.0” and build out dcntral.ai’s Cybersecure Transactive Networks platform.

Akin to all blockchain distributed ledger systems, Hedera hashgraph offers a new means of achieving consensus among blockchain transaction system peers. That is to say it provides “a way for people who don’t know or trust each other to securely collaborate and transact online without the need for a trusted intermediary,” Hedera hashgraph’s creators explain.

Unlike blockchains based on Bitcoin’s “proof of work” method of achieving consensus, Hedera hashgraph, according to its creators, “is lightning fast, secure, and fair, and, unlike some blockchain-based platforms, doesn’t require compute-heavy proof-of-work.”

Hedera hashgraph released the results of a transaction processing speed test of its public distributed ledger platform alongside launching the public hashgraph platform. Fifty thousand transactions were processed in three seconds using a peer-to-peer network to which 30 computers spanning eight regions of the world were connected.

Analyzing the results further, that equates to 1.5 seconds across 2,000 miles (3,200 kms) or 0.75 seconds among peers located within a single region.

Digging a bit deeper into its technical aspects,Hedera hashgraph employs what’s known as Byzantine fault tolerance to ensure that transactions and communications are highly secure and tamper-proof. Consensus time-stamping of prospective and authenticated transactions and blocks is used to ensure fairness.

The founders of Swirlds, a permission- and hashgraph-based distributed ledger, launched Hedera hashgraph, a public use version of the platform, on March 13. Swirld’s hashgraph mechanism for achieving blockchain consensus, in turn, was created by Leemon Baird.

In order to achieve consensus among peers much faster and more efficiently, the gossip protocol makes use of “meta-gossip” — gossip about gossip. Essentially, “gossip about gossip” amounts to information regarding transactions exchanged by hashgraph peers that isn’t known across all network nodes.

The gossip protocol gathers critical information contained in the meta-gossip to do with new transactions, including via which distributed network peer it originated and how far and wide it traveled among peers. The entire history of messages associated with a new, prospective transaction to be added in the creation of a new block are consolidated, in temporal, ordinal sequence, into one hash.

Predicting how network peers will vote

“I can guess how you would vote, but you don’t need to vote, so you reach consensus for free. It’s the fastest way known to humanity to send information,” Baird was quoted in Stein’s article for TechCrunch…

Of vital importance when it comes to avoiding coming under the hammer of national and international regulators, Hedera Hashgraph platform comes equipped with anti-money laundering and so-called “Know Your Customer” peer identification.

These attributes figured prominently in Cohen and Barry’s decision to make use of Hedera Hashgraph to design and build out dcentral.ai’s “AI 3.0” functionality and the Cybersecure Transactions Network platform. Right now we are planning to use the Hashgraph Consensys algortithms for private permission-based network implementations but we will also consider using the Hedera Hashgraph public ledger in the future said Cohen.

“AI 3.0 combines the benefits of over 30 years of research on AI, machine learning, and multi-agent systems with blockchain and DLT technology to finally enable the emerging industry 4.0 where billions of devices will be connected to the internet and will need to coordinate in real-time at the edge of the network,” Cohen wrote in a Nov. 30, 2017 post for Hedera Hashgraph’s Medium channel.

Cohen dug deep into and assessed alternative, so-called “blockless,” blockchains before deciding to work with Hashgraph among others. Leading examples of these, such as DAGCoin and IOTA, make use of their own versions of what is known as a Directed Acrylic Graph (DAG) to resolve the scalability and processing speed/efficiency issues that constrain blockchains that make use of “proof of work” to achieve peer consensus and create new transactions and blocks.

Cohen found them lacking in features. “While these may have found suitable use cases, in evaluating these technologies, I determined that none would meet all of my requirements (scalability, speed, footprint, fault tolerance, cybersecurity, AI integration, communications, etc for initial use in permissioned networks.”

As Cohen recounts, he was fortunate to meet Baird and Harmon while working to create “the perfect underlying blockchain foundation” for mission-critical cyber-physical systems. With funding from private investor and the U.S. Department of Energy (DOE), Cohen, since joined by Barry, continues along that path of innovation.

Interested in hashgraph and next-gen blockchain distributed computing systems, distributed ledger and cryptocurrency systems and platform development. There’s much more to come on dcntral.ai, as well as here on its Medium channel.

Related Topics:David CohenDcntralHashgraphpress release
Up Next

The Man Behind ICO Services, Inc. Advocates for Transparency and Community Building

LAS VEGAS, March 9, 2021 (GLOBE NEWSWIRE) – ISW Holdings, Inc. (OTC: ISWH) (“ISW Holdings” or the “Company”), a global brand management holdings company with commercial operations in Telehealth and Cryptocurrency Mining, is pleased to announce that the Company has paid off and canceled a major convertible debt note by allocating $363k to settle the outstanding obligation and remove it from the books.

“As our financial reality has shifted over recent months, we have an opportunity to drive value for our shareholders in many ways, including eradicating dilution risk by being proactive in addressing outstanding liabilities,” noted Alonzo Pierce, President and Chairman of ISW Holdings. “Without this action, the note would have had the potential to convert at a 50% discount to current share pricing. We weren’t comfortable with that potential outcome, so we deployed capital to eliminate that risk.”

The Convertible Note that has now been canceled presented a dilution risk for shareholders upon potential conversion into equity at as much as a 50% discount to market pricing for shares. Management is committed to preventing dilution risk as part of its official anti-dilution strategic initiative, introduced last year. The Company has regularly and consistently taken steps to eliminate, cancel, or pre-empt dilution risks such as those presented by convertible debt notes since announcing this initiative.

LAS VEGAS, March 2, 2021 (GLOBE NEWSWIRE) – ISW Holdings, Inc. (OTC: ISWH) (“ISW Holdings” or the “Company”), a global brand management holdings company with commercial operations in Telehealth and Cryptocurrency Mining, is pleased to announce that, following the signing of hosting agreements with Bit5ive LLC and Scrubgrass Generating Company, LLP, based in Kennerdell, PA, the Company has successfully tripled its active Cryptocurrency mining fleet with the addition of two (2) new POD5IVE datacenters.