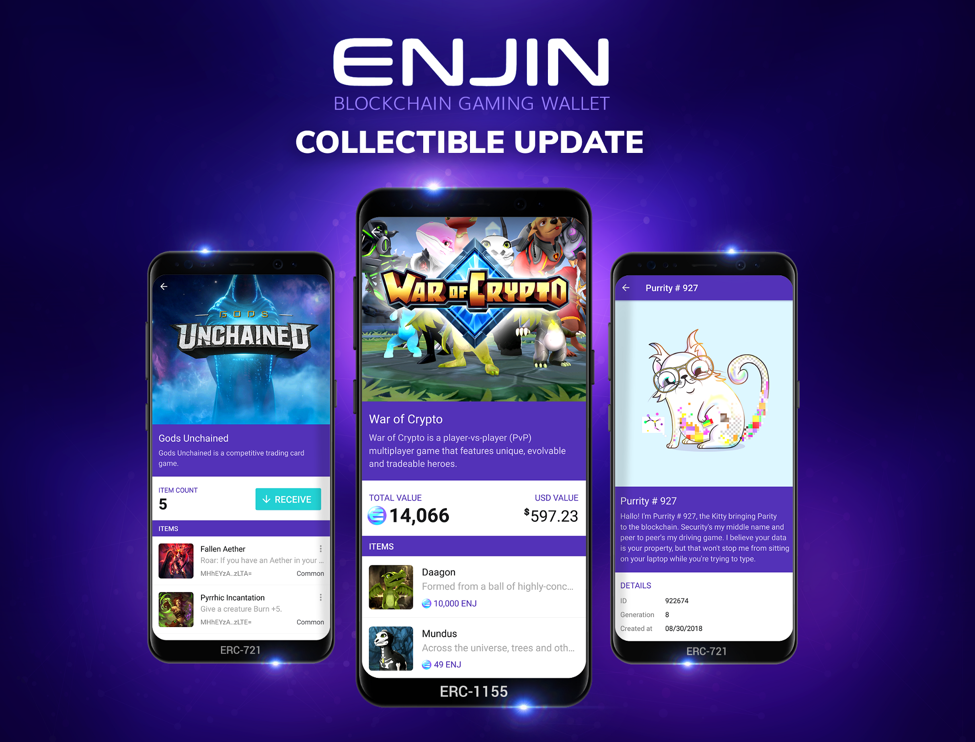 Enjin has released its latest update to the Enjin Smart Wallet, which showcases rich data and images for ERC-721 and ERC-1155 tokens (in addition to currently supporting 700+ cryptocurrencies). The update is expected to transform the gaming industry, with players now able to see, store, receive, and protect their items in a decentralized manner, thereby giving them true sovereignty over their in-game assets.

The wallet will initially support War of Crypto, Gods Unchained, and CryptoKitties, with many additions from various industries soon to come. Due to the ERC-721 standard’s design, each legacy token will need to be added to the wallet manually. However, ERC-1155 tokens will be automatically integrated into the wallet as they are created, offering frictionless support for ERC-1155 adopters. To celebrate this momentous event, Enjin is giving wallet users who register at https://enj.li/giveaway, a free multiverse item that will be usable in several different games. 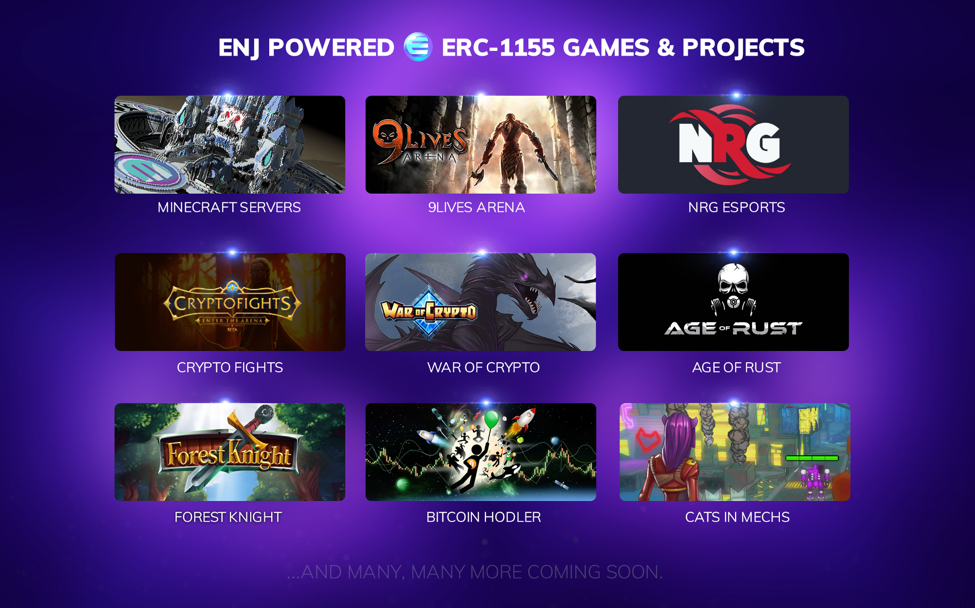 The Enjin Wallet has received a high rating of 4.7 out of 5 (equivalent to 94%) in the Google Play Store, which offers the Android version of the app. On Google Play alone, users have downloaded the wallet more than 129,000 times. There have also been more than 81,000 downloads of the wallet’s Android package file API, often used by app developers, and the Apple iOS version. 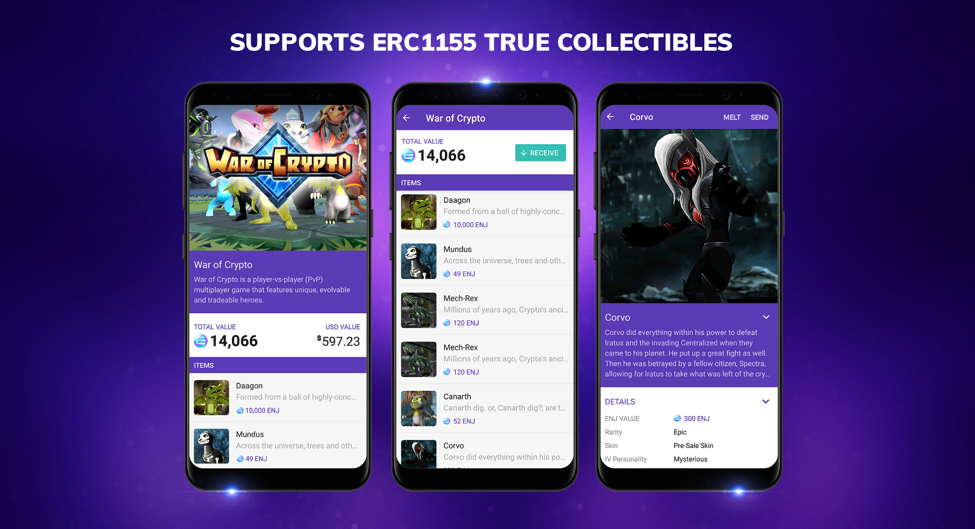 Enjin recently successfully launched their smart contracts on Ethereum’s Mainnet, enabling developers to create their own ERC-1155 tokens with support from Enjin’s robust suite of tools. These ERC-1155 tokens will soon be automatically added to the Enjin Smart Wallet, with users able to hold and manage them securely.

Announced in late June, ERC-1155 has created a sizable buzz as a token standard that opens a multitude of use cases for blockchain technology. Designed for flexibility, ERC-1155 enables minting of fungible, semi-fungible, and non-fungible tokens, meaning items minted using the token standard can be completely unique, completely identical, or somewhere in between. The standard is also far more efficient than ERC-20 and ERC-721, allowing users to initiate bundled transactions of up to 200 tokens at a time. 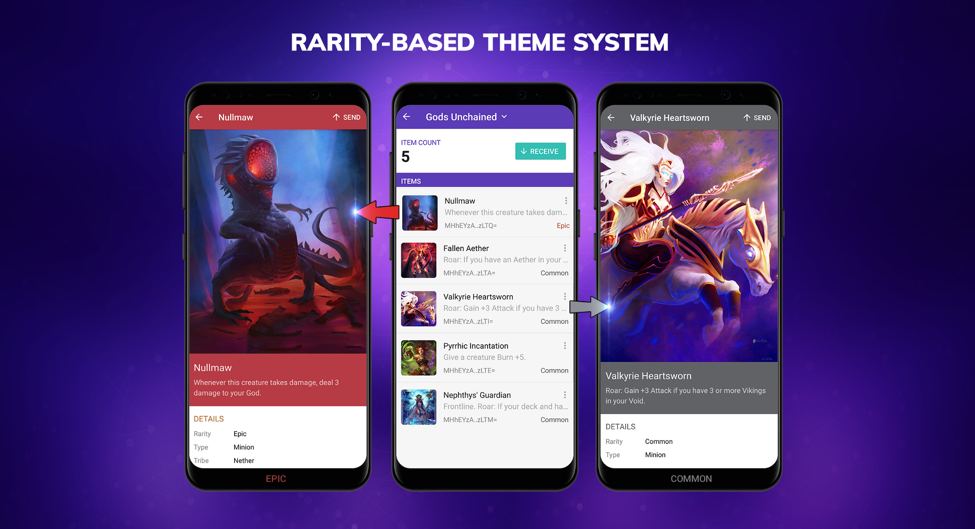 Enjin’s soon-to-be-released blockchain explorer EnjinX will also provide native support for the ERC-1155 token. Acting as an encyclopedia for virtual items on the blockchain, EnjinX will enable users to verify the intrinsic value of items by accessing data relating to their scarcity, identity, history, providence, and authenticity. Seven games have already announced their adoption of the ERC-1155 standard to tokenize gaming items, with many more on the horizon.

Unity Technologies has also announced plans to list Enjin’s Blockchain Software Development Kit (SDK) on the front page of their Asset Store. The Unity game engine is the world’s largest game development platform. Adoption of Enjin’s Blockchain SDK will enable 4.5 million Unity developers to mint ERC-1155 crypto items and manage advanced gameplay mechanics through transactions on the Ethereum blockchain. All users that wish to create ERC-1155 tokens through any of Enjin’s development platforms will need Enjin Coin (ENJ) and Ethereum (ETH) to do so.

Related Topics:ENJEnjinenjin coin
Up Next