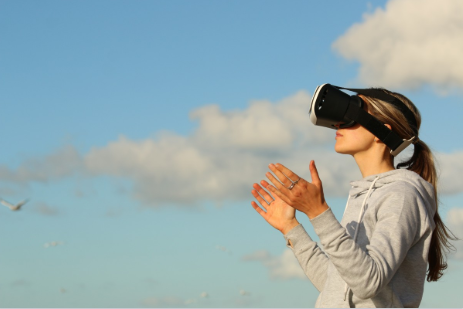 Will VR be the key to Tron’s social network implementation success?

When Satoshi Nakamoto, the elusive legendary code writer who invented the blockchain and Bitcoin, released his ideas about a new currency based on cryptography, he was very clear about the goal: it was about getting rid of fiat currencies, banks, and credit card companies through full decentralization. Very ambitious but very clear.

That’s what it’s all about. That’s what all cryptocurrencies are about. Bitcoin, Litecoin, Ethereum, you name it, they are all going after fiat money. But there’s one exception: Tron.

While Tron’s project does include a cryptocurrency called Tronix (TRX), Justin Sun‘s vision is even wider and more ambitious than Nakamoto’s. Tron’s CEO and founder wants to use the blockchain to create a fully decentralized web in which corporations have no power over content or monetization processes. He targets the entertainment industry mainly, but he basically is going for everything.

The ban on social media: bring it on!

Sixty days ago Twitter joined the anti-crypto club started by Facebook and Google. None of those firms has been outspoken against Bitcoin or any other digital currency (Facebook even started an in-house blockchain team recently), but they’ve been draconian in banning any and all adds related to cryptocurrencies. They are currently being sued for this in countries like South Korea, China, Russia, and Switzerland.

The ban isn’t great news for the crypto world because lack of advertising in media as important as those will slow things down. However, a closer look at the situation suggests that it could backfire against the social media giants and end up favoring the crypto community. Here’s why:

Decentralization is the core value of cryptocurrencies, the quintessential feature of the blockchain. The media giants are central authorities in their own fields, they’re not too far from being monopolistic. If they are not Big Brother (not an overstatement after the Facebook and Cambridge Analytics scandal) they are at least gatekeepers. If their behavior serves to illustrate the abuses inherent to centralized power, it only bolsters the need for decentralization on the internet.

When Orson Welles finished filming Citizen Kane and the film was banned, he was just elated. He knew right then and there it would be a huge success (which it was, and it’s considered until today as one of the best movies ever made).

So Facebook and friends may claim they are keeping crypto away in the best interest of their users. But we all want more something when somebody tells us we can’t have it. Just ask Adam and Eve. So while the ban will prevent faster growth in the short run, it will end up making things more interesting for laymen.

People can become fed up with gatekeepers

If Google, Twitter, and Facebook keep taking unilateral decisions, users can just have enough of them at some point. Companies are not a fact of nature and they don’t last on the top forever.

Remember a time when it was unthinkable for IBM to be outdone on the software business by these two Seattle nerds who started up a little firm that was called Microsoft? A few decades later it was equally unthinkable that Microsoft could be challenged by another small startup founded by another couple of nerds, this time from San Francisco, called Google.

The third point is the most relevant for Tron’s case. Justin Sun is trying to rebuild the web from scratch by means of the blockchain so that central authorities for all types of content or social media lose the power they hold. In other words: Sun’s dream is Google’s and Facebook’s worst nightmare.

It’s a very long shot for Tron to get a market share that could be compared to Facebook’s or Twitter’s (at least for now) but it could still create an environment for those content producers who are not so happy about studios, corporations, Google and central authorities in general.

And there’s another possibility: Tron’s blockchain could find another technology to use in tandem. Augmented reality is a good candidate. This combination could create the world’s first VR/AR social media platform, and it would be fully decentralized. That could be the killer app that seals the deal for Tron.

Tron’s looking for meaningful partnerships in the gaming industry. Justin Sun has already created a link with Game.com’s Xu Le who, in turn, has been vocal in advocating and encouraging games that will incorporate the blockchain and cryptocurrencies. He considers the Tron partnership as a win-win deal for both parties.

Once Tron penetrates the gaming industry, bringing VR into their social media would be the logical next step. Tron has the tools, the platform, the resources and the vision to bring it about. That would give the Tron brand, the Tron Foundation, and Tronix a tremendous advantage.

And that advantage would be to stand out. The first obstacle for a new product to do well in social media is the lack of a competitive advantage, of having something that makes it special. That’s the incentive that makes customers move from one platform to another.

Facebook is interesting only if most people you know are there already, for instance. For Tron that could be coupling a successful cryptocurrency with virtual reality. That will snatch some headlines, for sure. As things stand today, Tron can’t seriously think about overthrowing Facebook, or Twitter.

It will have to swim against the current. But it still becomes one of a kind with something like the “premier crypto coin based social media platform” or like “first virtual reality social media platform”. New things are always attractive. If you want someone to remember you, show them something, give them an experience nobody has given them before. That could create just enough interest, attention and users that, in time, they could even become a problem for Facebook.

Virtual Reality games are unavoidable. It’s just a matter of time for them become the rule rather than the exception. Tron is in the right place to be the main crypto factor in this equation and it stands to make a killing if it really takes advantage of those ties.

The first step for Tron would be to get enough meaningful partnerships in the industry and to steer them and their developers into social media outlets. Then, integrating social media and VR would be the next logical step to promote the platform, especially if Tronix and the Tron foundation can shake the gaming industry a bit.

Are You Ready? The Qurrex ICO Public Sale Will Begin in June